Command of the Week - Fill with Symbols (Week 50)

The Fill with Symbols command is designed to fill a polygon with symbols. It was originally designed to create forests, which is still the main use today, and as such, it is designed to pack the area tightly, and does rather regular positioning. This means that it is very useful for some purposes, but less useful for other purposes (like randomly filling an area)

[Image_9928]
The most common usage of this command is to pick a forest-type drawing tool and use it in your map. Map styles generally have two ways of representing forests, the first one is using this command to place the forest as symbols, the second one is to simply use a fill style with a tree pattern. The tools creating the forest using symbols generally have better looking edges, since you can see the trees and their trunks at the edge.
Back in the old days, one had to put in forests manually, and this is why you in many symbols catalogs can find these big blocks of trees with only their tops. These blocks of trees allowed you to draw a large forest quickly, and the reason these blocks only showed the tree tops was that when additional trees were being placed in front of the, the trunks and bottoms would be hidden anyway, and back in the day, skipping these parts made the trees simpler, which meant they would redraw quicker, increasing performance. With the modern bitmap symbols, this speed optimization is less of a concern, since a block of trees is still only a single image, no matter if the trees contains trunks or not, but it is still a big performance benefit from having large blocks of trees as a single symbol instead of each tree being it's own symbol in a large forest.

However, this command doesn't just have to be used with the forest drawing tools. You can configure it yourself, and use it manually to draw whatever you like. First, let us start by configuring the tool. When you start the command, you'll see the Forest Options Dialog, here filled with the values used by the Decid forest drawing tool from the Mike Schley overland style.
This dialog may seem a bit daunting, but let us explain the basics of it: When you run the command, CC3+ will fill the specified area with symbols from the list. It will try to use the biggest symbols in the list it can fit in any given position, and then fill inn the smaller gaps with the smaller symbols to fill the area as tightly as possible (assuming the CX/CY values matches the symbol sizes, if not gaps will occur).

Note that when you run this command, CC3+ will use the current default symbol scale defined in your map, so if you have placed all your other symbols in your map using a different scale than the default (without changing it), you should go to File -> Drawing properties and change it to your preferred value before running the command. This is something you should normally do in all cases anyway to match the scale your are using in your map if you are not using the default value.

For this example, let us try making a city from multiple village symbols, like some maps that have been posted to the forum lately. Do note that this won't put in perspective and such, so it is a pretty limited reproduction, but it shows one way to use this command.

For my example, I started with a 50 by 40 Mike Schley overland map and drew a polygon representing my city shape. I then ran the command with the values as shown in the dialog below, and got the result in the image to the right. Note that the command also use the varicolor version of the symbols I picked, because they were defined in the same symbol group in the symbol catalog. This provides some variation, but make sure to select a decent color before running the command.
It won't fill perfectly to the edge, because the symbols are quite large compared to the polygon size. The smaller symbols are related to this, the more "perfectly" the symbols will fill the polygon. 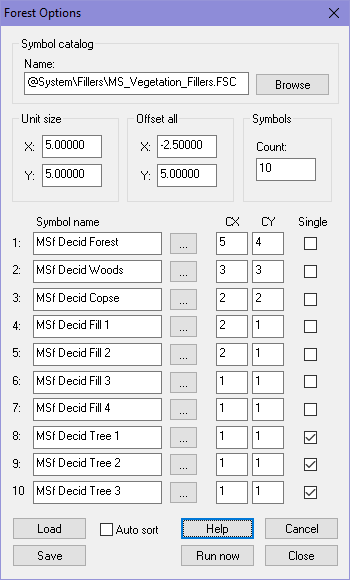