Command of the Week - Symbols in Area (Week 52)

One of the more recent additions to the ever growing list of CC3+ commands, Symbols in area is a command designed to fill an area with symbols. It differs from Fill with Symbols in the way symbols are arranged in that area. Fill with Symbols is designed to pack the are as closely as possible, and can pick from a list of symbols to pick the perfect fit for each "spot". Symbols in area on the other hand is more about distributing the symbols in the area. It can do nice and even rows and columns, or it can do random placements.

This command is designed to fill an area with symbols. In CC3+, this area is represented by a polygon, so always start by drawing a polygon that define the area you wish to fill. This could either be a polygon that you intend to keep as a background behind the symbol, or just a temporary polygon that you plan to delete afterwards. Do note that Undo works with this command, but you'll probably need to do undo several times in a row before you get back to before you started this command.

[Image_10029]
Once you start the main command, you will be presented with a dialog much like the one for Symbols Along. From this dialog, you can control which symbols to use, and how to place them. Let us explore this dialog and see what the options in it can give us.

Symbol Catalog to Use

This part of the dialog should be rather self-explanatory. Browse to the symbol catalog you wish to use, and select the appropriate symbol from it. Note that you can only pick a single symbol, but if that symbol is part of a group, the checkbox below the list controls whether it will use just the symbol selected, or will randomly pick from the group for every individual symbol placed. If your symbol is not in a group, I recommend you simply create a new symbol catalog, import the symbols you wish to use and set up groups as needed. The image below shows output with single symbols vs groups.
[Image_10030]

These settings controls the rotation (angle) of the symbols placed, including allowing you to supply a a randomization value to have the angle be a bit different for each symbol placement. All this should also be mostly self-explanatory, but the three different options at the top may need a bit of explanation. If you have used the Symbols Along command, you should recognize these, as they allow the symbol to be rotated to follow the direction of the line. The behavior here is pretty similar, and even if the polygon itself doesn't have a direction, the line that defines it does. Basically, this will rotate the symbols based on the direction of the closest part of the outline. The three images below shows these three options in use.
[Image_10031]

This controls the minimumn distance between the symbols being placed. This is primarily useful when you take advantage of the random variations, but make sure to check this value if the distance is larger than you expected.

This allows you provide a random chance for a symbol to be placed at each spot. If you are using a random layout pattern, you'll probably not have much use for this value, but if you use more regular layouts, this can be used to randomly skip certain spots.

From here you can select which kind of pattern you wish to use, such as regular grid pattern (rectangular or hex) or random placement in the area. There are also options here to control how you want to treat the edge, for example avoid placing symbols too close to the edge, or even just place them along the edge. You can also set the distance between symbols as well as a random modifier to this distance. The images below shows a grid patter with no randomness versus a grid pattern with a small amount of randomness in the distance.
[Image_10032]

Cacti in a desert using random placement with small random variations to angle and scale.
[Image_10034] 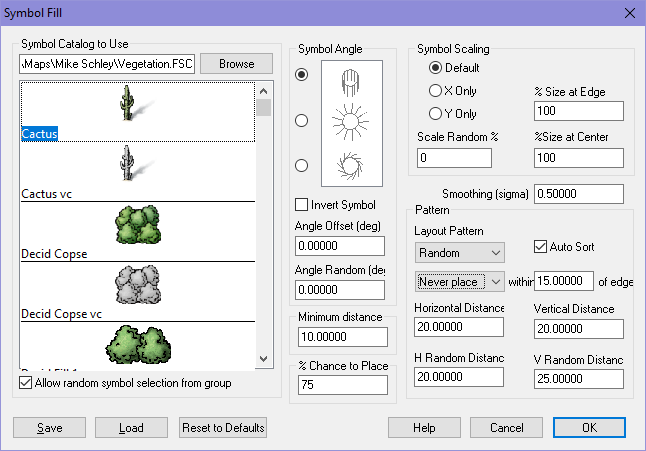 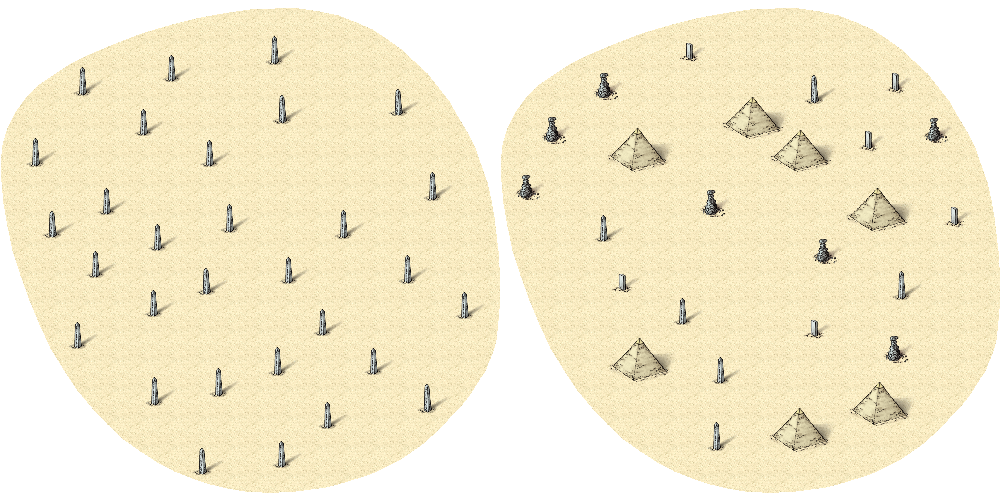 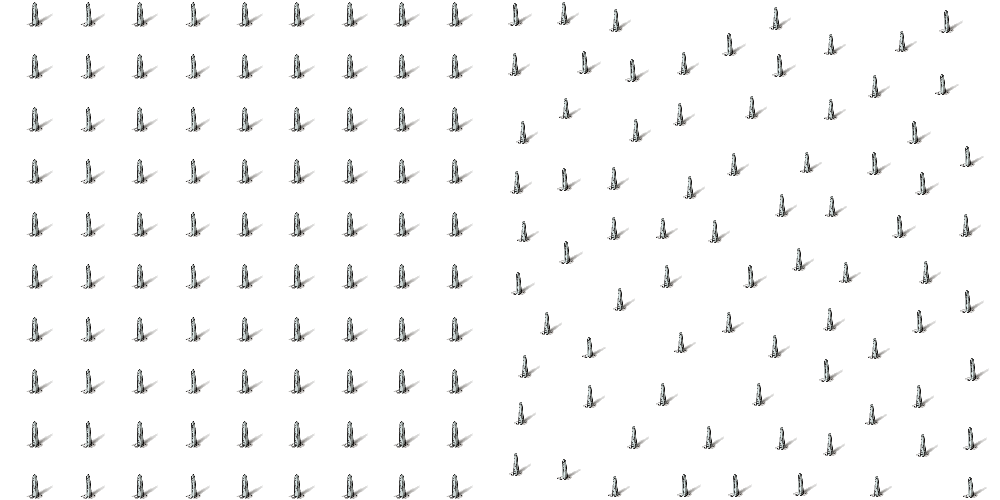 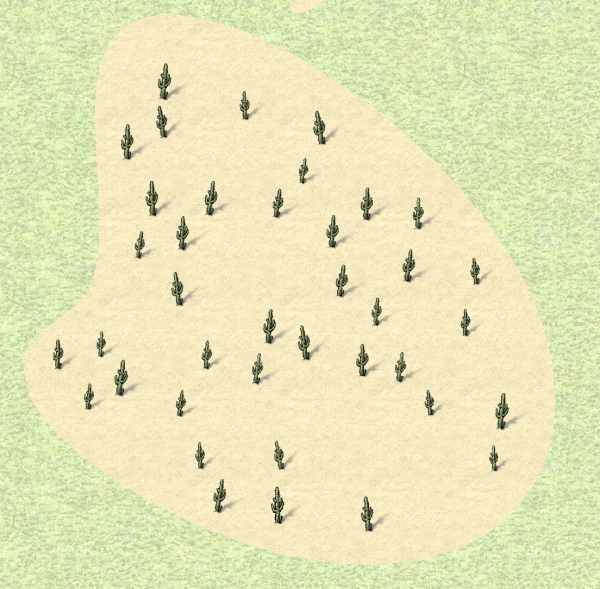