Trace is a feature of most drawing tools that let you draw a segment of your entity precisely along the edge of another entity. This is very useful whenever you need perfect accuracy, such as terrain following along your coastline, that dungeon floor ending precisely at that cliff or that political border following exactly along that river. This is extremely helpful when you need to follow the outline of a fractalized entity, like a coastline.
Trace is a very simple command, and very easy to use, but it does have one uncommon quirk that can cause some confusion and incorrect usage; read on for details.

Trace isn't a separate command, but rather a feature of drawing tools. To start Tracing with a drawing tool, you first need to start that tool, and then place at least one node in the drawing with it. Once the first node has been place, you'll notice that the CC3+ command line will contain the text 'T - Trace' near the end (The rest of the text depends on the exact tool. If you have the floating command prompt on with expanded text, the text will be more verbose, but will say basically the same thing). This is an indication that you can hit the T key on your keyboard to start tracing whenever you want. 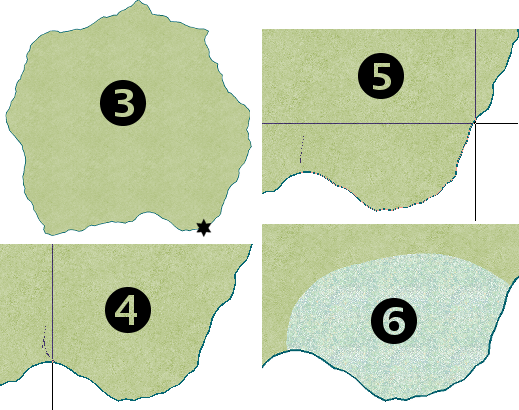 To use trace correctly, it is important that you do things in the right order:

The most common problem with using trace is that you don't pay proper attention to point 3 in the list above. The point you click on the entity to trace is extremely important, as CC3+ uses this point to determine which way around the entity the trace should go. As you can see from my island, the trace could theoretically go two ways from my start point, either east along the coastline or west along the coastline. Going east would mean I would trace along a short segment of coast before getting to the ending point, but going west would mean that it had to travel almost all the way around the island, covering most of the coastline before getting to the ending point. So, how do CC3+ know which way we wish to go? It will simply send the trace through the exact point you used to select that entity. So, assuming my start and end point were the same as in my illustrations above, if I used the point marked A to select the island for tracing, the trace would go through that point and only trace the small part of coastline I wanted, but if I used any of the points marked B, the trace would go through that point instead, meaning it would have to go all the way around the island. So, as you can see, the point used to select the entity is VERY important.
Note that you should not worry about the direction until you have your mouse cursor at the actual end point for the trace, CC3+ may temporarily show the line the wrong way around when you still have the mouse close to the starting point.

Another problem is that CC3+ may be slow when tracing very complex entities. The trick here is usually to just move your mouse a little, and then wait until CC3+ has updated the preview, then move the mouse some more. If you continually move your mouse around while CC3+ is updating the preview, it will never get done, as each move triggers the update to begin anew. Also, the crosshairs appear frozen while CC3+ updates the preview, so it is very difficult to move your mouse properly if you move it while the preview updates. To minimize this problem, make sure to zoom into the area you wish to trace before starting, especially on complex entities.

Be aware that a smooth entity cannot follow the edge of a straight entity precisely, nor the other way around. So if you use a terrain drawing tool that creates a smooth polygon, and try to trace a fractalized coastline, you'll notice that there will be some small discrepancies. Often, these are too small to even be noticed, but sometimes they are more visible. It is generally always best to use a straight tool for tracing straight polygons, and a smooth tool for tracing smooth polygons. Remember that if the desired drawing tool doesn't exist, you can always create a new one; the fastest approach is usually to make a copy of an existing one, and just change the shape.

Dogtag made a nice video tutorial explaining this feature.