In CC3+, the global sun is used to indicate the direction and strength of light in your map. This light is used in several effects and features, most notably shaded polygon (used for roofs in CD3 and shapes in Per3 and more), lighted bevels, directional wall shadows, and with the point light shadows (used for dungeon/floorplan lighting).
Many of the aforementioned effects can also be set to ignore the global sun and set up their own direction, but by relying on the global sun instead, you have a single place to change the value, and all effects relying on it will behave properly, ensuring that you don't have some effects that makes the light come from the north, while others make it looks like it comes from the south, for example shadows going in opposite directions.

Using this command is a two part-procedure. You need to both set the global sun values in the dialog that shows when you run the command, as well as define effects in the map that will actually use these settings in this dialog. The values you set in the dialog is meaningless if no effects are set to rely on them, you cannot directly change light level in the map from this command, it is only a way to control other effects, as well as shading (see the Shaded Polygon command).

When running the command, you will see The Sun dialog pop up. This dialog contains many settings, and you should be aware that not all effects use all the settings here. Some (like wall shadows) are only concerned about the compass direction (azimuth) the light is coming from), while others (like shaded polygons) also care about the strength of the sun and the height above the horizon (inclination), and uses this information along with the pitch and direction of the shaded polygon to calculate the final light levels.

[Image_9980]
Let us examine the values in the dialog, and what they are used for.

The below image shows what happens to shading and shadows as you move the global sun around.
[Image_9982]

The example below shows a simple dungeon with point light effects set up, a single lightsource in the middle of the room. The left image shows the map with a shadow transparency of 0, while the right one use a value of 33. The right image is still dark, but you should still be able to make out the details of the map where the left image was completely black.
[Image_9981] 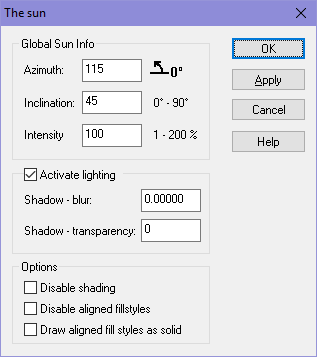