In CC3+, you'll find something called smart symbols. These are symbols that have a defined behavior on placement, such as automatically aligning themselves to a road, cutting a wall, resizing themselves to fit and so on. All of this is done by adding control points to a symbol. A lot of the official ProFantasy symbols already contain control points, but you can also add this to your own symbols easily. Today, I'll explain how to add control points to your symbol, and what each of the different options does.

How to use them?

Control points can be added to a symbol either before or after you define it. If you make a new symbol, you can add them to the drawing immediately, and just make sure to include them in the selection when you define your symbol. Or, to add them to an existing symbol, simply edit the symbol from the symbol manager, add the control points to the symbol in the edit window, and make sure to say yes to saving the changes to the symbol when you close the edit window. The latter is the best option if you make symbols by importing png's.

When you execute the command, CC3+ will ask you to define two points, basically a line. The length and placement of this line is very important, since it is this line that defines the size and orientation of the behavior. For example, for a cutting symbol, the cutting will only happen along the length of this line, and not the entire symbol itself, and for a symbol that aligns to a line, it is the direction of this line which determines how to orient the symbol. For these reasons, it is very important that you are careful when placing this line. You may also consider using the various modifiers, like endpoint, to help you place it accurately.

[Image_8930]
Once you have placed the control line, you will get a dialog popup asking you which control attributes to give the line: [Items in square brackets are examples from official ProFantasy symbols you can test] Note that one set of control points can have multiple of the options above enabled for it. Normally, a symbol should only have one set of control points with the appropriate options, don't make one set for aligning and another for cutting, that will not work properly. Also note that the behavior of the control points will only happen if they are held over a line when placing them. For example, a symbol with align on insertion can be seen to visually align as you move the mouse over a line, but the alignment reverts immediately if you move your mouse away. Offset also only works if the symbol was aligned to a line in the first place, if you place a symbol in such a way that it is not aligned to a line, CC3+ won't ask for an offset either.

If you have trouble getting such a symbol to work properly when placing it, make sure that you don't have snap on, as this can cause the symbol to not be placed exactly on your cursor, and also make sure there are no other conflicting lines to align to at the same location as you are placing your symbol. You may try to hide other sheets to make this easier if there are.

The below image shows a simple symbol. The control points are the pink line running through the middle. This particular symbol have align on insertion and cut on insertion turned on.
[Image_8931]

This image show placement of the symbol. To the left is the successfully placed symbol, showing how it made a break in the wall. To the right in the image a symbol currently on the cursor can be seen, and how it automatically aligns to the wall.
[Image_8932] 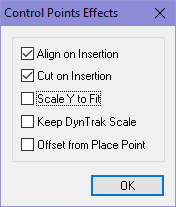 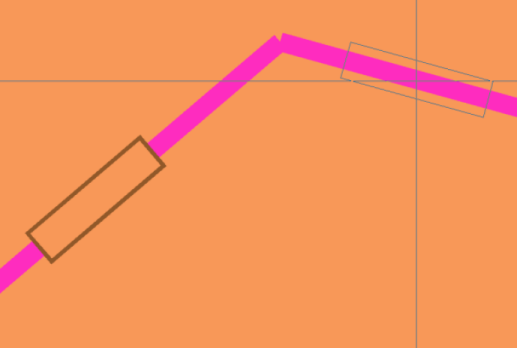