[Image_8854]
Running the command will bring up the Select Catalog Setting dialog. If you click on a setting now, it will load that setting (and the accompanying symbol catalog), but the interesting bit is accomplished by clicking the Advanced>> button.

Symbol catalog settings should be named starting with the style, then the catalog type, and finally a unique identifier if needed, to enable the filters to work properly. The style name is easily visible by listing other catalog settings from that type, and the same goes for catalog types. Here are a few examples, where the style name is in blue and the type is in brown. The unique identifier, where present, will be presented in black. These examples should help you identify what you are looking at when examining existing symbol catalog settings. When you make your own, make sure to stick to these conventions if you wish your catalogs to be available from the symbol catalog buttons. And remember it starts with the style, then the type, so make sure to put any custom/personal information at the end.

A nice advantage to have settings associated with a symbol catalog is that you can create multiple settings for a single catalog. Did you make a nice symbol catalog with stalactite symbols that would fit both the SS2 Bitmap A style AND the DD3 style? Well, simply make two settings, both pointing to the same symbol catalog, and name the first one SS2 Bitmap A Cave Stalactites and the second DD3 Color Cave Stalactites. You can then set different properties if you need it too, like have the catalog use a different layer when loaded in SS2 versus DD3.

Above, I wrote a broad generalization implying that all symbol catalog buttons change the filters, causing the symbol catalog setting to be loaded, and so on. While mostly true, there are a couple of exceptions. For example, the Bitmap A/B CD3 buttons actually change the master filter instead, listing all the catalog from that style, instead of setting a specific type. This was done to make a more flexible system for types of buildings which aren't always as easy to categorize as dungeon accessories. The rest of the DD3 button, used by the older vector styles, are toggle buttons that toggles between several different catalogs, ignoring the filters.
Finally, some add-ons (especially 3rd party/community ones) simply load there symbol catalog directly, ignoring the filter/setting system. These often use a submenu that pops up when clicking the button instead, to allow one button to have multiple catalogs.

My symbol catalog setting is not in the list:
Do the name you gave it match the current filters. Remember that both the master filter and catalog settings filter apply, so make sure it is named according to the guidelines above, and that there are no spelling mistakes

The symbol catalog is empty:
The catalog setting points to a non-existing file

Clicking a button brings up a Select Catalog Setting dialog, but it is empty:
There are no settings available for the current filters. This usually happens if a particular style does not provide symbols of that type. The same buttons will appear for all maps of the same type (dungeon, overland, city, etc..), but not all styles within these types have the same types of symbols available. 'If you are sure there should be symbols of that type, you'll probably need to reinstall the add-on in question.

The wrong symbol show up when clicking a button (like vector symbols when working in a raster style):
This happens if the master filter has been changed, for example by clicking the symbol style toggle button. In most cases, closing and reopening the map will fix the problem. If not, read the next installment in this series, which will explain the filters. 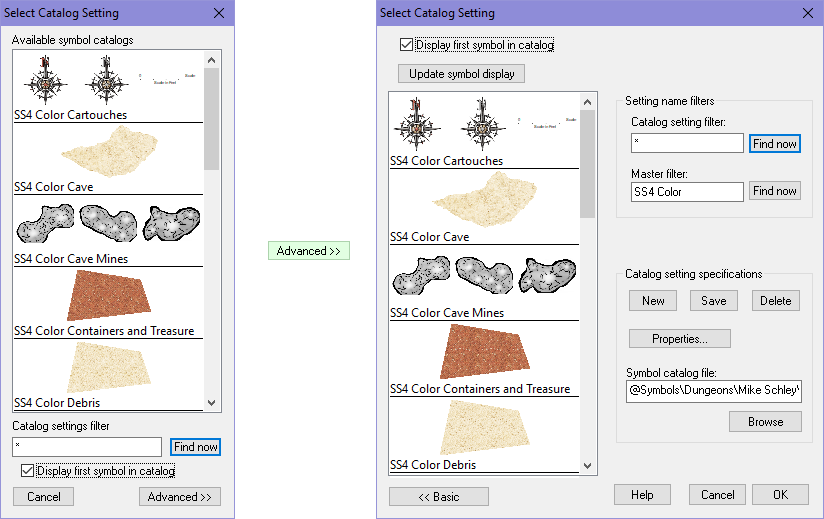