Ever needed a printable symbol lookup sheet (either for actual printing, or to keep as an electronic document)? CC3+ can make those for you automatically. This can be great to create a nice overview sheet for your own custom symbols, or for symbols from any other source, such as official ProFantasy symbols, or the symbols from the free community symbol sets.
Do note that while you can create such sheets for personal use, providing them to others will be a breach of the CC3+ license agreement (for official ProFantasy symbols), and will probably be against the license agreement of most other 3rd party symbol sets as well. You can of course distribute symbol lookup sheets for symbols you have made yourself.

When using this command, it is important that you have loaded the file containing the symbols as a map file. Usually, you wish to create these lookup sheets from symbols in a symbol catalog, so make sure to load this first. And remember, it need to be loaded into the edit window (as a map), not into the symbol catalog window. Now, with the correct file loaded, activate the command. This will bring up a dialog box.
[Image_8797]
This dialog should be self-explanatory, just make sure to provide a filename in the top input field. When running this command, a Campaign Cartographer 3+ map file (.fcw file) will be produced, containing all the symbols from the current file arranged in neat rows and columns. Make sure you create a new file, don't select an existing map or symbol catalog, as it will be overwritten. Also, if you type int he file name manually instead of using the dialog, make sure that it uses the .fcw file extension.
You may wish to change the number of rows and columns in the dialog, but I find that the default values work fine for most uses.

Once you click OK, the file is created silently in the background, CC3+ won't give you any indication of what happened. The file will be where you told CC3+ to put it however, and you can open it up in CC3+, and you will see a file that looks something like the image below (For this demo, symbols from the Vintyri Cartographic Collection were used). Now, you can either print this file (either regular printing to paper, or to a virtual printer to produce a pdf file), or you can export it as an image.
Also note, that the catalog thumbnail file you just generated is still a CC3+ map, so you can manipulate it before printing. One common task that might be required is to provide proper spacing between pages if the number of symbols span more than one page, to avoid having a symbol cut in half by a page break.

Symbols from more than one catalog?

There may be times when you wish to make a symbol lookup sheet with symbols from more than one catalog. The procedure for this is simple. Either start with a blank map or one of the symbol catalogs you wish to use. Then, open the symbol manager and hit the Import button. Use the dialog to select another symbol catalog, and click ok. Voila, the symbols from that catalog is added to the currently loaded one. Keep doing this to add more symbols, and then finally generate the lookup sheet- Make sure to NOT save the changes to the catalog you started with however, or it will end up containing a lot more symbols than it were supposed to. 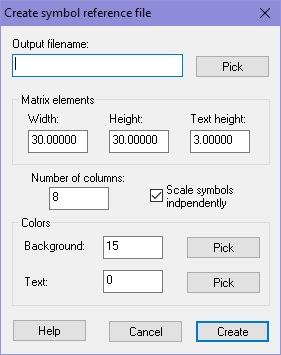