Note that official support for all resources released by the Vintyri Project, like this one, are via email to info@vintyri.org. You are still welcome to use this forum for help from fellow CC3 users, but the Vintyri project does not monitor this forum or provide support here.

Download page is now here.
Please make sure to visit the FAQ page if you have any issues.

Use these links instead of those in the text below. You may also need to use these links if direct links to files mentioned in the install guides don't work.

NOTE: A number of the addresses and links in earlier Vintyri postings now are dead and have been replaced by the new options mentioned below!

We now have completed release of the entire Vintyri (TM) Cartographic Collection for CC3+, finishing the conversions with Vintyri Symbol Set 5 which includes castles, town halls, a barracks, temples and connecting symbols for making governmental, military and religious compounds. In all, the complete cartographic collection contains 974 CC3+ raster symbols in the VH, HI, LO and VL resolutions and 122 fill styles along with templates and drawing tools, also in the VH, HI, LO and VL resolutions. Additional templates and drawing tools can be downloaded and installed by users of City Designer 3 and Dungeon Designer 3 with CC3+

The Vintyri Cartographic Collection is released for private and commercial use under the Open Game License 1.0a. It is a free program. The Vintyri Project is a non-profit, non-commercial organization. We sell nothing. We neither solicit nor accept donations. We do no kickstarters. We're strong supporters of open source gaming.

Now that the full package has been released, the installation routine has changed substantially. Instead of having to download and install many different apps, you need only to:

The PNG graphics that make up the symbols and fill styles have a total download size of 4.4 GB. Because several users have reported problems downloading huge files, we have split the symbol and fill style downloads up into 13 smaller ZIP files. We know that this is irritating for users with very stable high-speed Internet connections, but it's necessary to make the cartographic collection to all users.

We have prepared a free bookmarked PDF Vintyri Cartographic Collection Installation Guide that will show you step-by-step with screen illustrations exactly how to do things right. PLEASE use the installation guide. A number of users didn't when installing the preliminary releases. You can read a few of their sad stories here in the forums. We got to read even more such tales of woe by private E-mail. Think of the old acronym from the early days of PCs: RTFM! (which meant "Read the @!&* Manual!). Save yourself hours of work unmangling a mutilated CC3+. It's easy to install the collection, but you have to do it right. You can get the free installation guide here:

If you're uncertain whether the collection is for you, you can preview it here:

The preview shows you all 974 symbols and 112 fill styles.

After you've downloaded and installed the collection, your \Data Folder\Documentation folder will contain a 202-page bookmarked PDF book entitled "Vintyri Cartographic Collection Guide for CC3+." We released an earlier edition of this book several years ago for Fractal Mapper (TM) 8 and Dundjinni (TM), and we received a lot of feedback from users who found it to be extremely useful. This new edition is filled with brand new content and is tailor made for users of CC3+, CD3 and DD3.

During our test phase, both we and our testers found issues in both CC3+. These issues have been reported to ProFantasy, and we'll let ProFantasy decide whether they're bugs. Regardless, these are issues where CC3+ did not perform in the manner we thought that it should and where it created some genuine problems while mapping. We managed to duplicate these problems on a new PC upon which the Vintyri products never have been installed, so we're rather convinced that these issues are with CC3+ or CD3 and not our software. Be that as it may, the collection guide explains these problems and how to solve them or work around them, if possible. If not, the book tells you how to avoid them.

The cartographic catalog content is based upon real-world prototypes from the Middle Ages. As with the previous Vintyri releases for CC3+, this new edition integrates completely into City Designer 3, using CD3's roof lighting, toolbar, demographic building coloring, etc.

To go directly to the download site, go here:

Sometimes after installing a Profantasy product with a previous install of CSUAC, toolbars will be empty or missing.
The cure is in one or two steps, of the following steps:

1) Run the current CC3+ update again, after installing everything. This will fix the empty toolbars for ProFantasy's own products.

2) For the free Vintyri add-ins, you will find a file named menu_recovery.bat in (Data Folder)\Profantasy\CC3Plus. The data folder is usually C:\ProgramData, but might vary if you chose a custom location when installing CC3+.
If you run this file after running the latest CC3+ update, it also will reconstruct the Vintyri toolbars correctly. 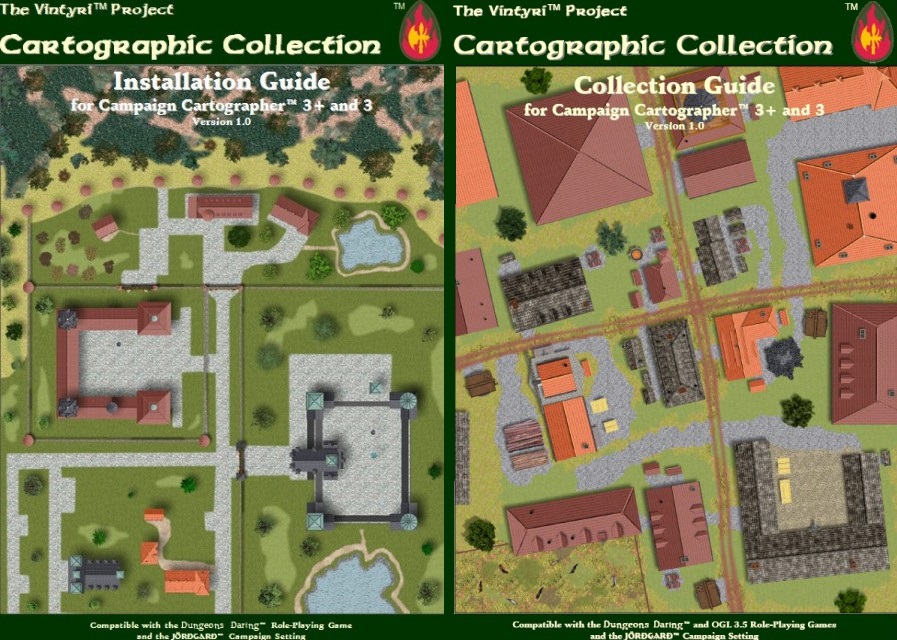