When approaching, or leaving, the Faerie city of Embra, and as discussed previously on the Forum, the settlement seems to be merely a village, whose appearance can be different depending on the direction involved. Eight such Village maps are provided for the Atlas, one for each of the main compass directions - north, northeast, east, southeast, south, southwest, west and northwest. As also noted earlier, the bases for these eight were randomly-picked maps from the two Judges Guild "Village" RPG map books, published in the late 1970s, reworked and amended in places to fit what was needed here.

Those base maps were all placed within hexagons, though I decided a circle would be more suitable here from very early in the process. Having set that, the overall appearance of the eight Village maps was quickly established, partly thanks to the banner, scalebar and compass-rose assets available in the CA169 Fantasy Town package chosen for the mapping.

A decision had been made too that variant Celtic knotwork borders were going to be key aspects of all the Embra maps. Finding a circular design was fairly straightforward - if unfortunately not using the CA23 Map Border options (as they work only for rectilinear borders). Those CC3+ designs did influence the general look to an extent, however, with the "Village" colours partly chosen following those used in the "Official Guide" map's border: 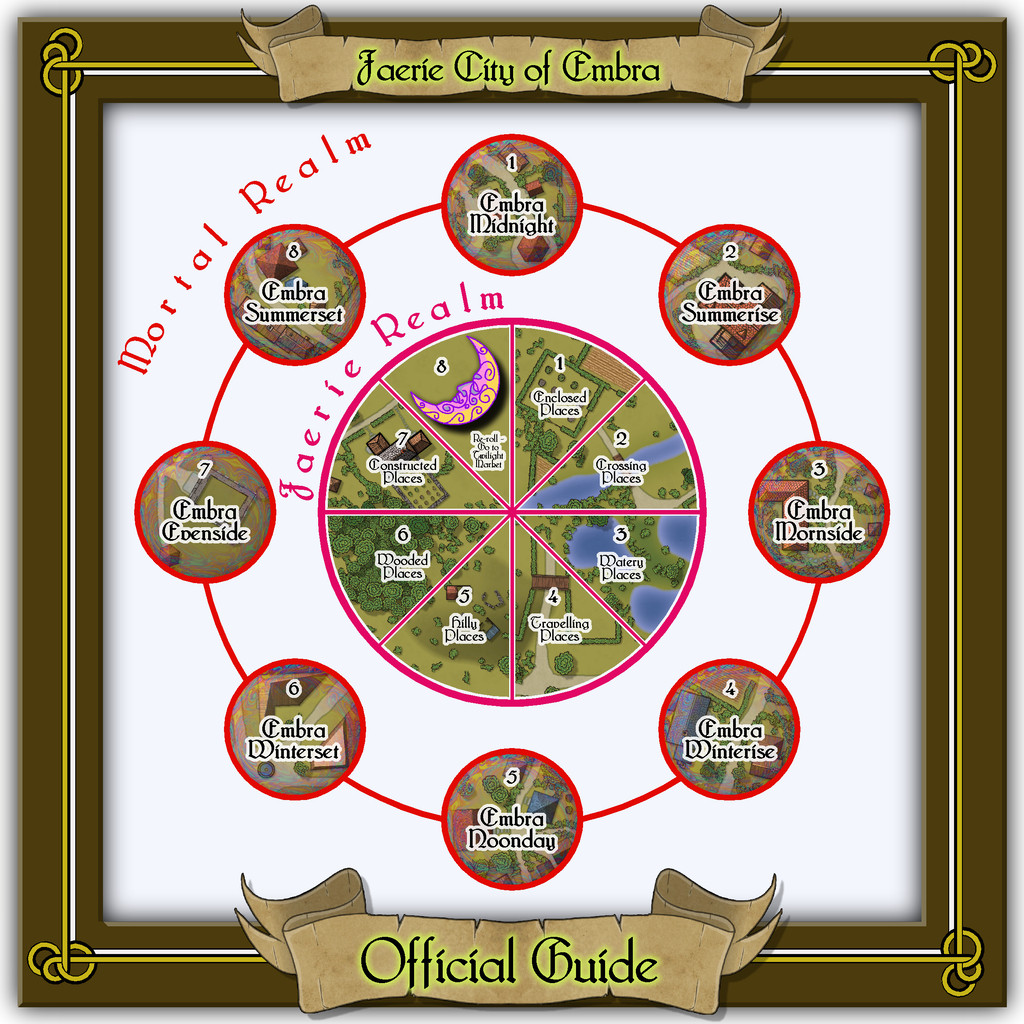 The final Village knotwork design was based on a couple found online, although one of those, what turned out to be my final choice, was also virtually identical to one in the Dover Clip-Art "Celtic Borders on Layout Grids" hardcopy book, mentioned in the introductory Forum topic as well. This then is the map for the "north" Village, Embra - Midnight: 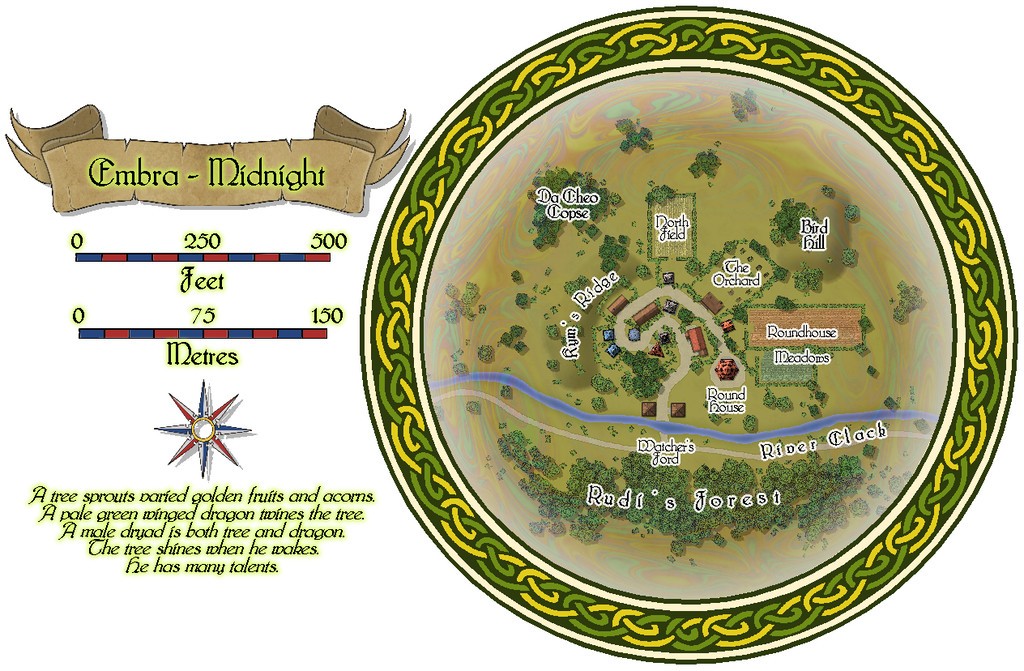 The nature of these eight Villages, on the border between the Mortal and Faerie Realms, invited adding something to each map to reflect that, hence the pale, misty, oil-iridescence colours towards the edges, fading into the middle. This also gives a suggestion of viewing the map through an old, round window, lens, or in a mirror - Embra Through The Looking Glass, perhaps. That oil-patterning comes courtesy of @Loopysue's transparent City Domes symbols from CA144A.

Although scales and an unlabelled compass-rose are provided, nothing in the Faerie Realm is strongly fixed, so while the map is correctly drawn to the scales, GMs can adjust those distances, sizes and directions to best-suit their own needs. Similarly, the featured text below the compass-rose alongside the map can be used, adapted or ignored as the GM may wish. It was determined by a random tarot-card draw, as described previously, as an interpretation of what the card artwork showed or inspired.

Place-names on the maps were sometimes taken from their obvious nature, the surroundings of Embra as established on the Clack Valley map, my own earlier RPG mapping, or more commonly from a random choice of adapted names in Celtic mythology, primarily drawn from entries in James MacKillop's Dictionary of Celtic Mythology (Oxford University Press, 1998). Some of these are explored a little more in the PDF and text notes accompanying each map. The placement of the labels is necessarily somewhat obstructive at times, so a toggle in the Atlas FCW versions will allow them to be switched off for better clarity.

A second Atlas toggle on this Embra - Midnight map allows simple internal layouts for each building to be shown. The original Judges Guild settlement maps were always drawn like this, showing only cross-sections through the surface level's outer and interior walls and doorways, for almost every building. Indeed, this was established so early as the norm for RPG settlement maps, that I still struggle to make sense of the more recent RPG tendency of settlement plans that DON'T provide this option, but show just a - to me - sometimes confusing series of rooftops. This was part of the reason I decided to add this element for the Village, and many of the Places, maps for Embra, although a lesser aspect was I found it wasn't always easy to tell where the buildings were on some of the more heavily-vegetated maps. Most of the buildings have just a single room inside, while all occupy only the surface level on this map: 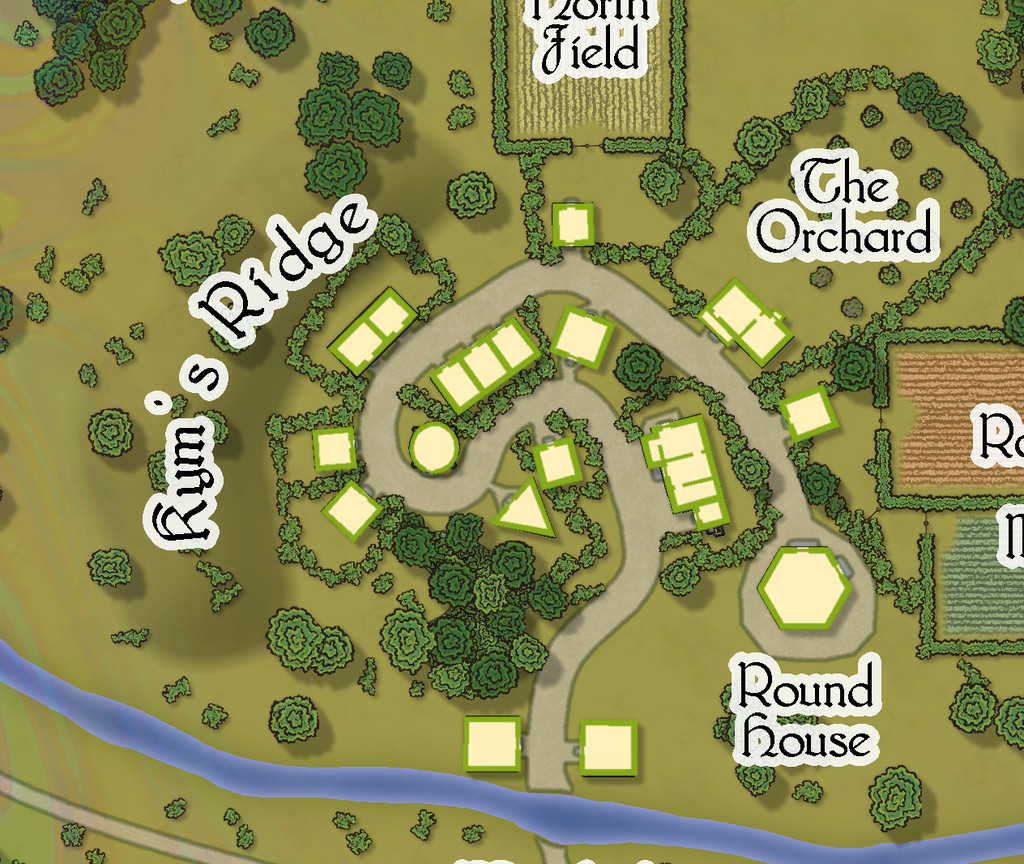 One aspect on most, but not all, these Village maps is the River Clack, which, as the Clack Valley map indicated, runs through the city. In Embra - Midnight, it is quite narrow, and crossed by a ford. Elsewhere among the Village maps, it can be broader or narrower, and bridged. In some cases, it becomes almost ditch-like. This variation, while adopted from the Judges Guild base-maps, was a deliberate choice from very early in the planning and construction process, to emphasize that Faerie is not the mundane world outside, where things may not be what they seem, even at such liminal places as these "outer" Villages.

While the Atlas connections favour moving from outside to an entry-village, and then on into parts of the city itself in Faerie (or reversing the process when wishing to leave Embra), there is no reason GMs could not opt to move the party from one Village to another as an extra possibility too, perhaps camping, or taking rooms at an inn, in one Village, only to wake next day in a quite different one - perhaps where the inhabitants are identical, say, for a little further confusion!