When I started preparing the Faerie Land map for the Atlas, I already knew I was going to add to it a couple of places which would require further mapping. As it turned out, both would be placed relatively near one another in northwestern Faerie Land, in the River Clack valley.

To better locate both though, it was clear a map covering a much smaller area than Map 40 would be helpful first, which is where the Clack Valley map originated. Examining what the valley looked like on the Faerie Land map, it seemed reasonable to cover the entire length of the River. From that, an area some 50 miles long by 15 miles wide (80 by 25 kilometres) would work nicely, as shown here by the orange rectangle: 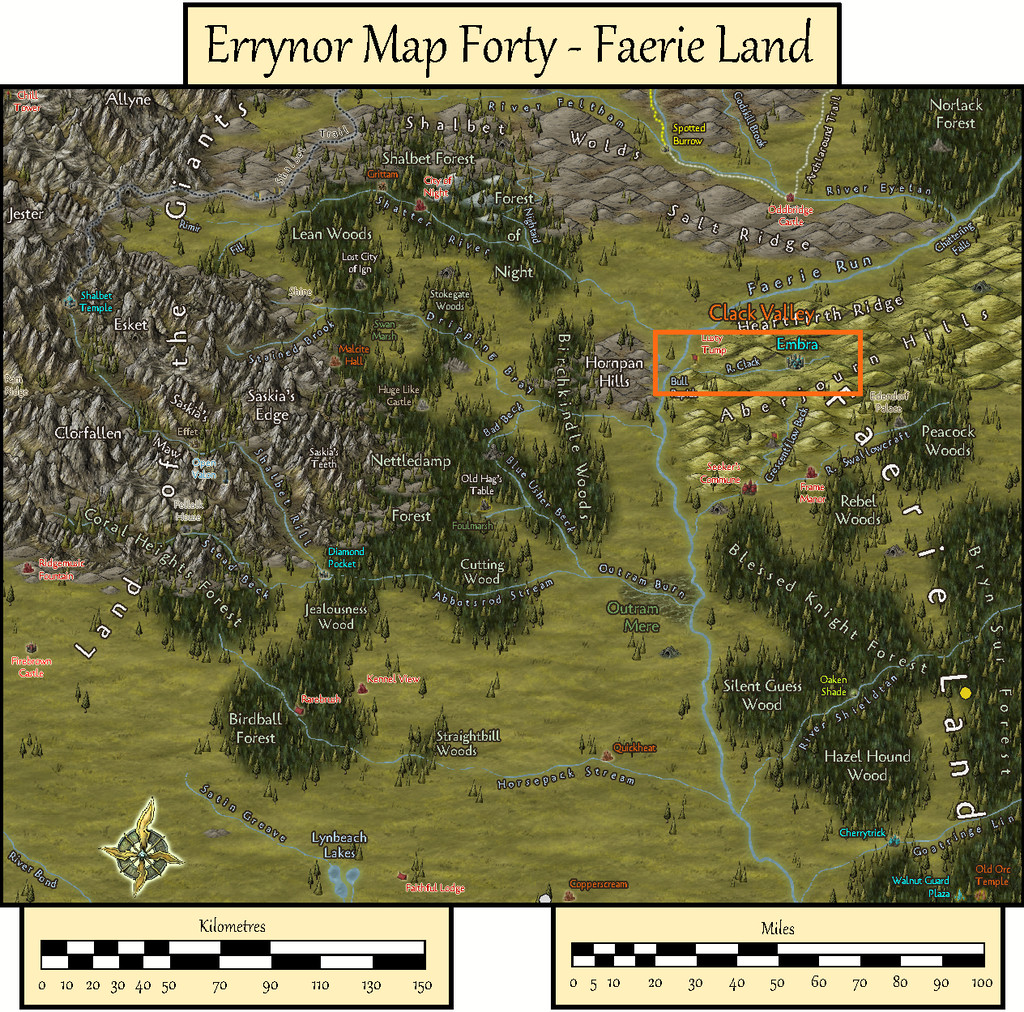 Making a hand-drawn copy of this area onto squared paper, much as I often do (see the Map 40 construction topic elsewhere on the Forum for the concept), I then drew-up some new and amended random feature tables to add fresh detail, deciding and setting the results into one-mile squares across the whole valley. From those, smaller rivers could be added in places, also drawing on the general tenor of how and where the various hill ranges had been plotted on the larger map previously. Here too, I'd decided to add a variety of random plants as well as creatures, since real-world faerie lore frequently draws attention to such things as having significance. This all helped give further character to the region.

By this stage, there was an increasing need for a host of new names to highlight some of these fresh significant places. Aside from the randomly-generated names left over from the Faerie Land map, which hadn't been used there, I'd also come across a substantial series of random-name tables on The Collaborative Gamer blog a while before, so I used those to roll-up an extra set of names to choose from, to add to what I had already. Some of the name-options on that blog are heavily Tolkien-based, which I decided against employing here, but many of the other tables read almost like a series of thesaurus entries, giving ideas even when they weren't always used in the strictly random form in which they'd been rolled. Then it came down to fitting the names to suitable specific places. After which, the CC3+ mapping could begin!

Looking through the various mapping styles of those I'd not used previously which work particularly well for handling smaller overland areas, led me to the Alyssa Faden Overland style from the 2014 November Cartographer's Annual. This is supplied with the Bridgnorth font, and that too seemed to fit with what I intended for this area.

This then is the basic map:

There are two small Keys to accompany it, which can be hidden separately if required, one of which brings in the extra labels and markers for the various creatures and plants added to the map:

Although most of the area illustrated falls within the Faerie Land Core zone, as defined already on Map 40, a small part towards the map's left-hand edge is beyond it, as this overlay view shows, also intended to be toggleable in the final Atlas FCW version:

Part of my reason in picking this mapping style was because it comes with its own selection of cloud symbols, so I had to add some of those too:

As these are purely decorative, despite being placed so as not to conceal too much of any important labelled sites, they were set-up so they can be toggled on or off separately as well.

Naturally, the Forum's layout options make horizontally-linear maps particularly difficult to see much detail on, so the images below show the western and eastern halves of the map a little closer: 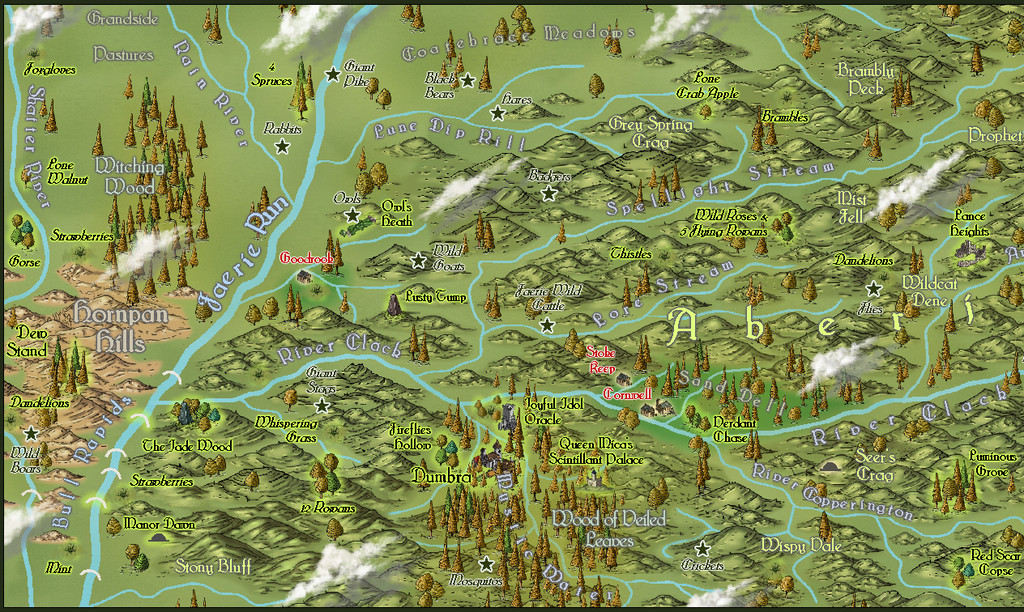 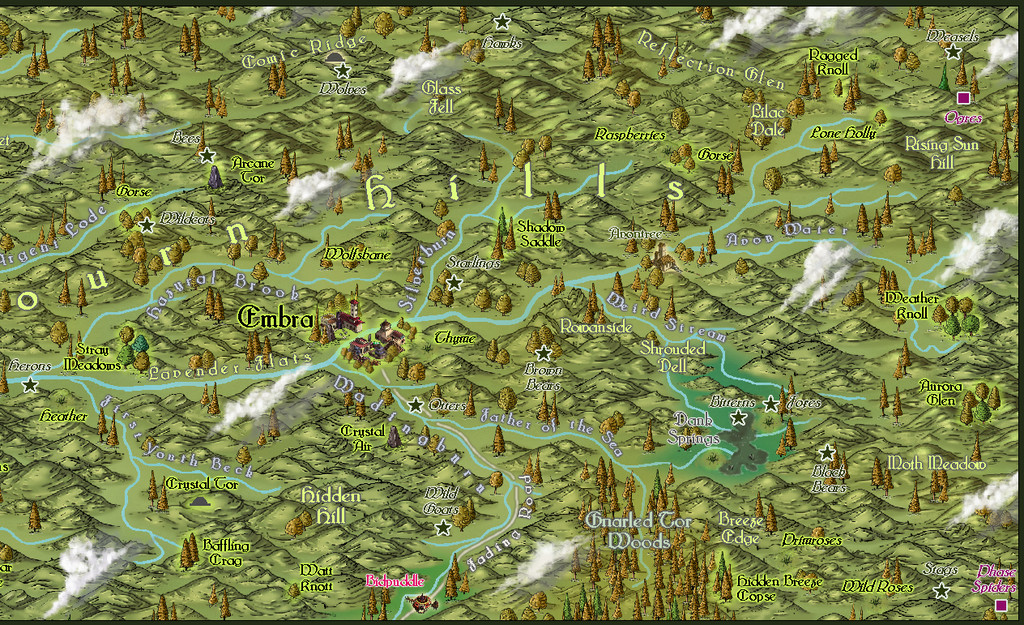 This last image is larger than the usual Forum preferred size, but it is at least complete!

The Atlas map will also be provided with the usual PDF and text file document of notes explaining more about the map's contents, and which two late medieval Herbals were drawn on especially to add a sprinkle of magic to some of those special plants!