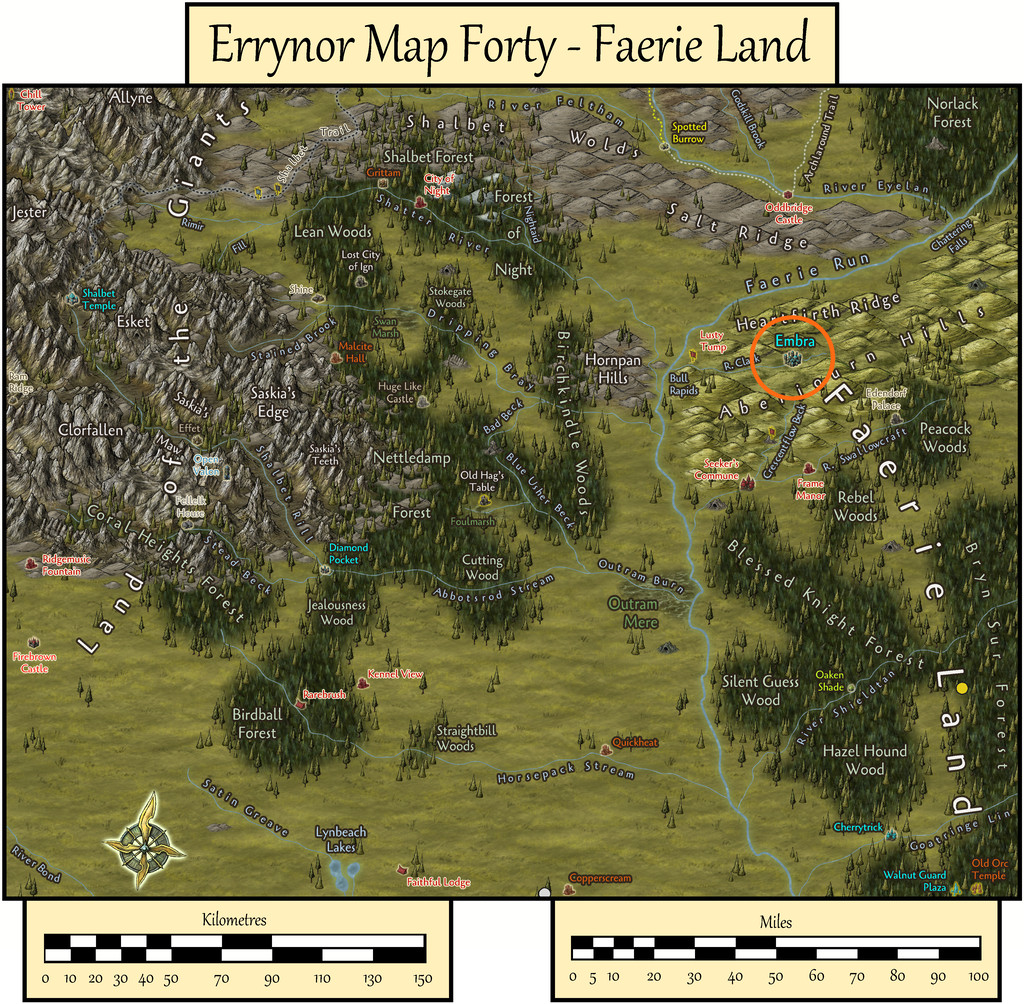 As mentioned before, my Errynor mapping project for the Community Atlas has been an opportunity to bring to life ideas sometimes previously developed, and occasionally even mapped, in earlier decades of fantasy gaming. A Faerie settlement has been a concept under consideration for years, without finalising a mapped setting. When a Faerie city - what became Embra - came-up among the randomly-designed places for Errynor, that seemed the perfect time to progress with the concept finally.

Influenced by literary, artistic, folkloric, musical and fantasy gaming sources, I wanted to give the impression that visiting the city would be like negotiating Maurits Escher's semi-dream-state artwork and that of some of the surrealists. Disorienting, essentially, yet retaining a quality of magical wonder.

That's fine as an idea, but it then must be transposed into the physical reality of one or more maps to fit the limits of the Community Atlas.

Eventually, I settled on having many maps for the city, each showing only a small part, without defining what the city as a whole should look like, or how its pieces might fit together. Thus every visit there will be different, albeit with some familiar places for those returning - if they can find them!

The Atlas connections mean a map can have multiple links from it, but each linked map must use the first map as its only parent. They can't cross-link separately. Thus I opted for a two-fold access structure like two concentric circles, an outer "ring" linking with the Mortal Realm (and the next map "up" in the Errynor maps, that for Clack Valley), while the inner would lead to the Faerie city proper, so entering or leaving the city would be usually via the outer "ring" - inward to Faerie, outward to Mortality.

So as not to be too linear, I decided that when approaching the city from outside, it would look like just a village, so someone wishing to visit the Faerie "inner" city would first need to find a means to do so from there. That might be achievable randomly, by GM's choice, or using something like the magical Law of Similarity - like goes to like - possibly variably. For the latter, entering a field through a gate at the "village" might lead instead into a floral garden or a park in the Faerie city, say, and so forth.

From this, I thought having the "village" be different in form depending on the direction it was approached from would add extra spice, and decided on eight for the eight main compass points - north, south, east, west, northeast, southeast, southwest and northwest. So that's eight maps already, and we're not yet into the city!

This does though provide those three options - a D8 random-roll possibility and the approach-direction "Similarity" mechanic, either of which could be superseded by the GM as preferred.

For the Village maps, I decided to use as a base some from the two Judges Guild "Village" map books from the late 1970s, chosen randomly from their nearly 100 layouts. These are identically-scaled, set within a hexagon 1,056 feet, 0.2 miles, across from flat side to flat side, subdivided into smaller hexagons each about 40 feet across similarly.

In the notes for deep-sea hag Aunty MacKassa (PDF link; Forum discussion for this map is here), I'd mentioned Embra contained the great Twilight Market. That was to be incorporated in seven parts here, one for each of the Place groupings. Instead of impractical cross-links between the Market segments, I devised a Twilight Market identifier, based on various online and hardcopy-book designs, adapted and recoloured (not a CC3+ symbol, simply a piece of artwork): 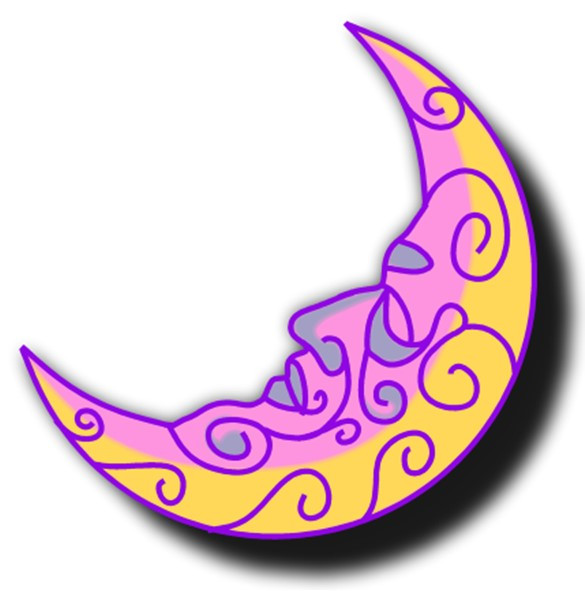 Rather than a "Return" option, the eighth item became an additional D8 re-roll, ignoring further "8s", after which the GM could continue to the part of the Twilight Market for whichever of the seven places had been determined.

Thus the eight Village entry-points, seven general Places links, and the Twilight Market indicator provided the initial map for the city, accessed from the Clack Valley map in the form of a schematic drawing, given its sole purpose was to link to the other maps of the city. I called it the "Embra Official Guide", similar to how some real-world tourist guides are named. The next image is a cleaned-up (i.e. legible!) version of my final pre-mapping sketch for this schematic: 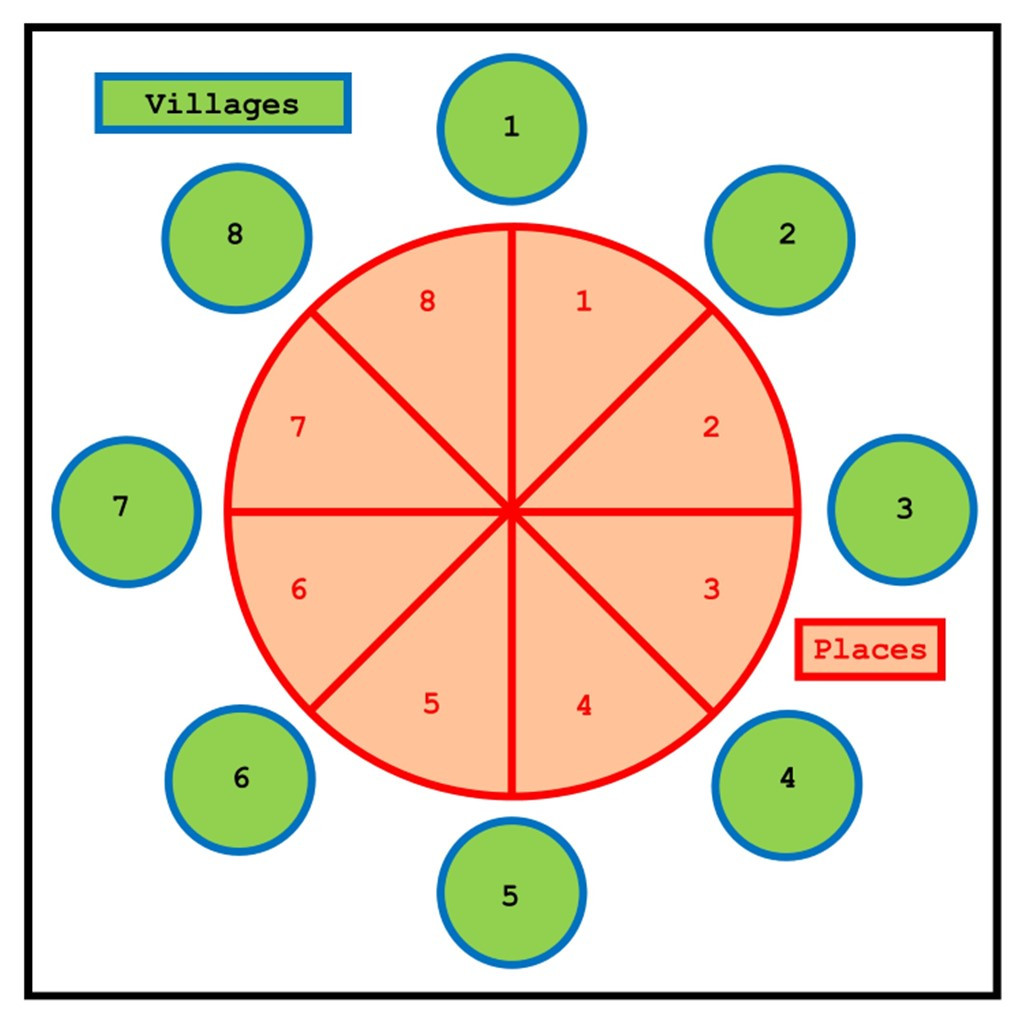 The eight outer Village maps link from this schematic individually, while the seven general area Places each get their own "landing schematic", as they consist of a group of separate locations. The random element, with other factors of what was both practical and interesting, meant each Places grouping would have ten different components in it, including the Twilight Market map for each Places set.

Ideas for what these Places might be came from a range of sources. Some were old concepts of my own, some drawn or adapted from fictional works, though many derived from real-world placenames. The origin of the city's name, Embra, is the local dialect contraction of "Edinburgh", Scotland's capital city. However, it also sounds like "ember", the glowing remains of a fire, which in turn conjures up the magical twilight glow of somewhere lit only by firelight, a place for stories of mystery and wonder. Thus the real-world City of Edinburgh became a source of inspiration for many of Embra's Places, suitably renamed, amended and altered to better suit a Faerie settlement.

The 70 items included locations in the city and names of streets, since Places need linking in ways more mundane as well as magical, to help keep things interesting. Ultimately, the split between Places and Streets was 34 to 36, as the "Streets" included a railway.

Each Place needed its own map, but the Streets and railway were condensed into a single map for each Places grouping. So the final tally of maps comprising Embra totalled "only" 57. Perhaps I should have named it "Heinz"...

This sketch illustrates the way the maps were to be connected: 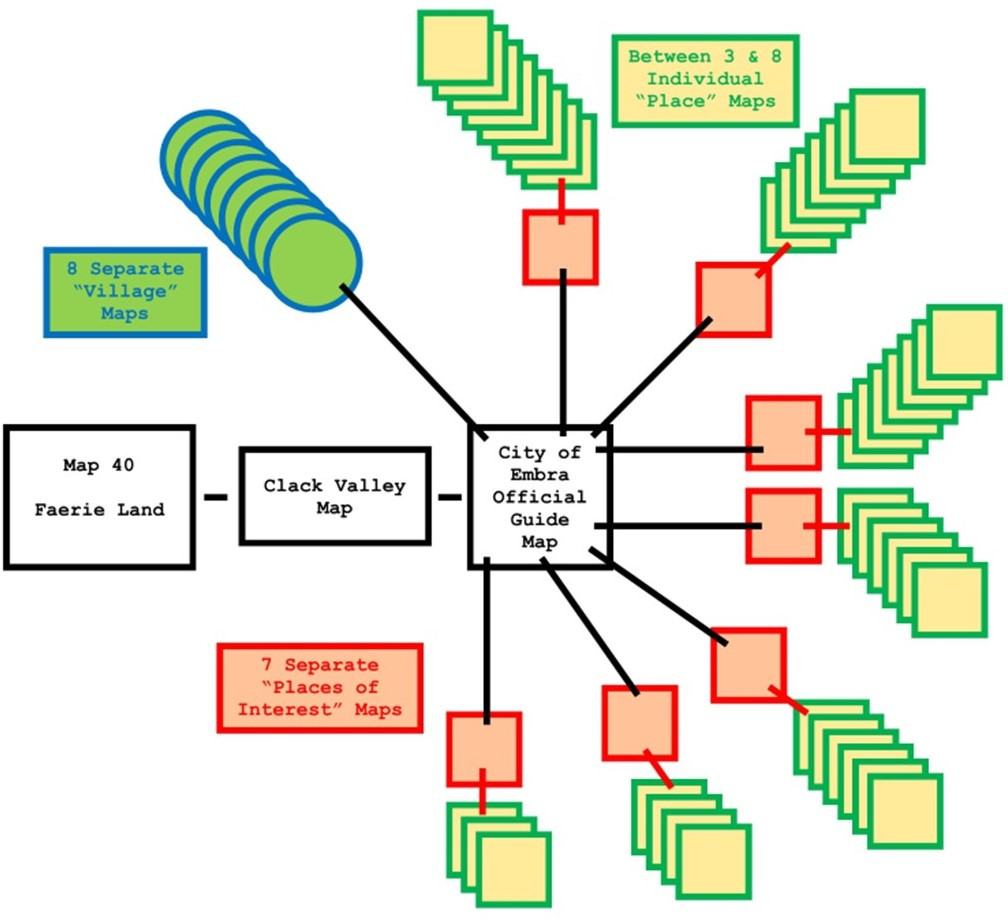 Random base maps for the main Places were selected from all the old Judges Guild map books I had available - Villages I & II, Castles I & II, Temples I and Islands I (there never was a "II" in either latter case). Each book contains around 50 maps, though the Temples volume doesn't use the same hexagon style and scaling as the rest. Places were allocated to particular base maps from their appearance and content, although changes were made, so sometimes only the overall form of the base map was used in constructing the CC3+ Atlas version.

I reworked a set of tables for randomly generating caves and mines from another old Judges Guild text to decide on the Street lengths, widths, types and layouts, although that system ultimately was more "me" than "JG"!

A few notes were added in the process, but I wanted more, less predictable, aspects too. I turned to two tarot decks, which each coincidentally consist of 78 cards. One card was randomly drawn for each Village, Place and Street from either deck, and extra comments added to the map. The decks were Tarot of the Secret Forest (although this online review page has a lot more images), illustrated by Lucia Mattioli (Lo Scarabeo, 2005), and Shadowscapes Tarot, illustrated by Stephanie Pui-Min Law (Llewellyn Books, 2010). Both are heavily Faerie-inspired in their designs.

For the mapping style, I chose the Fantasy Town one from the January 2021 Cartographer's Annual, as it was ideal for the relatively small areas I needed. It has an attractive dark-wood-look border frame. I've not done much with frames in my Community Atlas mapping so far, so my initial thought was to discard this, but I had a change of mind, and for most of the maps enlarged it as a distinctive aspect. Partly, this was to help tie together all the Embra maps, after adding a series of Celtic-style knotwork and animal designs to the "wooden" frames.

Some of those designs were inspired by the connecting vector symbol options from the Cartographer's Annual Map Border pack (as recently featured in one of the ProFantasy live videos), one of which was used for the final "Official Guide" map. Others were reworked from the copyright-free drawings in Celtic Borders on Layout Grids by Mallory Pearce (Dover Clip-Art Series, 1990), coupled with more found in various online sources. Each Place group and the Village maps gained its own distinct variant, adapting and redrawing which proved a new challenge in itself!

All the maps have written PDF and text file commentaries, as usual too (preparing which took notably longer than the CC3+ mapping!).

I'll be posting notes about the various Places groups on the Forum over the coming weeks, as well as sending Monsen the Atlas items. Next today though, I'll start with a look at the final Official Guide schematic map. 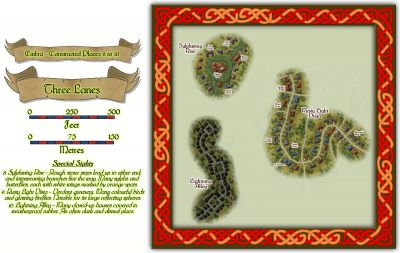