Resuming the presentation of the final maps linked to Errynor Map 01 from previously, all concerning the deep-sea hag Aunty MacKassa, we must now zoom right in to Aunty's deep-sea-bed home: 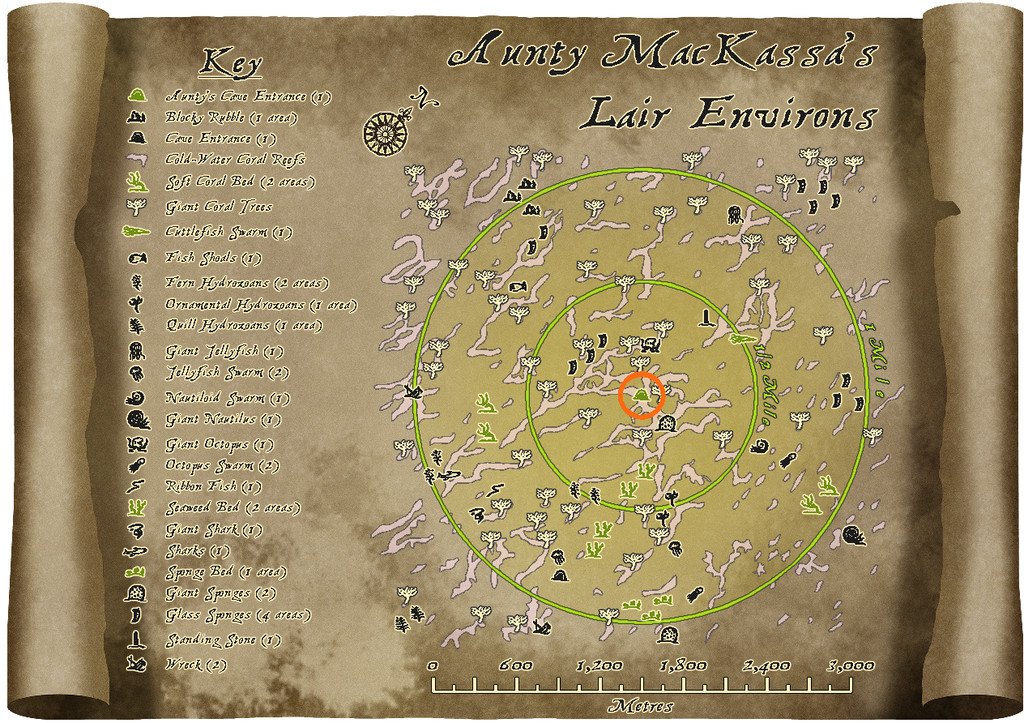 From early in the process of constructing Aunty's lair, I wanted both a fixed-spot home cave, and at least one unusual vehicle, to let her get out and about in "her" 50-mile zone, as established earlier, more readily. This is what some hags have in real-world folklore after all, such as Baba Yaga's chicken-legged hut and flying mortar and pestle. I settled on two smaller "spare" random cave designs from what I'd downloaded from the Curufea's Random Cave Map Generator website earlier as suitable for her coral cavern lair, providing a pair of subterranean levels. These were chosen mostly because each had one cave of a form roughly like the stern of a ship, and a shipwrecked vessel seemed the most obvious choice for a deep-sea hag's vehicle. My idea was, being a faerie creature, and thus seemingly able to circumvent physical "laws" most folks take for granted as "normal", that Aunty would be able to shift her lair effortlessly between cave and vehicle whenever she chose, so a similar shape and size for at least part of both seemed reasonable. Then an idea for a second vehicle, suitable for amphibious sea to land transport, came about too, from which the clearest option was a hut made from another shipwreck, with - what else? - gigantic crab legs.

As I knew elements would need to be copied between all three of these maps, I decided to use the standard DD3 mapping package, except for the fonts. The Coral Cave map was done first (using the East Anglia font from the 2012 Cartographer's Annual): 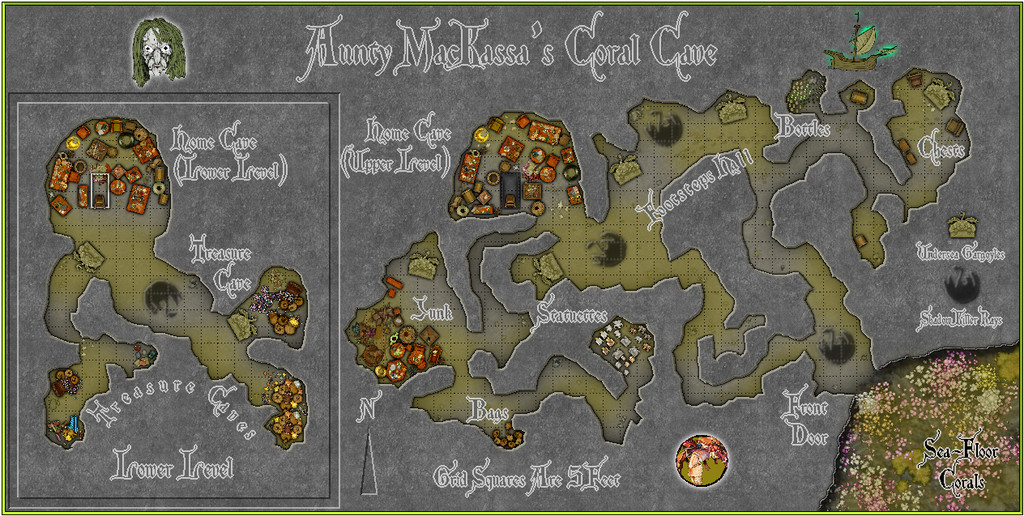 The hatch and ladder between the levels of the Home Cave were chosen to fit with the ship's-cabin concept, of course, while the scatter of clutter and treasure (if it is) was distributed as a compromise between the classic D&D very cluttered hag's lair, and a map that could be read still. Although the deep-sea hag creature is largely an idea of my own of old, it has always been heavily influenced by D&D, and as the 5th edition allows powerful hags to have an assortment of servants, I came up with the illustrated variants of Undersea Gargoyles and Shadow Killer Rays here (the latter drawing partly on a 1953 short story by Joseph Payne Brennan, "Slime", which made a lasting impact on me when I first read it as a youngster). The illustrations for the latter, the north pointer, and the "sunken" border around the Lower Level map segment, were enhanced thanks to the chance publication of Remy Monsen's blog posting on the use of Bevel Effects to create sunken "carvings" on floors while I was preparing this map.

Then I thought it would be interesting to see just what Aunty MacKassa looked like. So I constructed this image of her, using CA3:

As usual, there'll be a PDF and series of text-file notes available in the Atlas to explain the game-relevant map details, from which you can discover why she has a long, bone hairpin in her grasp, and a pair of gold-tinted spectacles in her other hand, should you wish! Plus of course, I added her face to the Coral Cave map to serve as the Atlas link-point to this portrait.