The Community Atlas Anniversary mapping contest is now over. During the month of February, 29 maps where submitted, which is just above one per day. During this contest, we managed to pass 150 maps in the atlas. Great work everyone.

The voting is now over, and the results are in. For the details results, look at the lists at the bottom of this post.

Congratulations to the winners, and thanks to everyone for contributing. Great effort everyone.

And to everyone receiving 0 votes on the best map vote, don't despair. Since people were only allowed to vote for a single map, that doesn't mean people didn't like your map, it just means you weren't anyone top choice. And while the winner was very clear, the overall number of votes was a bit low, just above 1 vote per map on average, so quite a few very nice maps actually ended up with 0 votes.

Big thanks to ProFantasy for sponsoring this contest.

The random draw was done using the sequence generator over at random.org in Advanced mode. As previously announced, the 5 secret numbers I received from five different community members were summed up, and the total was used as the persistent identifer. This ensured a random sequence not predicatable by me or any individual number giver, but at the same time ensured a reproducible result, as anyone with the number can easily repeat the draw to check the results.

The secret numbers were (each provider can check their own number to prevent manipulation by me, and all moderators/admins can see the original whispers and check that the correct numbers were indeed used):
Shessar: 57
kathorus: 486795
Josh.P.: 83
Dogtag: 8675309
ScottA: 52
Total: 9162296

The generated list then looks like this. Winners would be the top two maps (unless the mapper of those had already won another prize, in which case we would simply have continued down the list until an eligible winner could be found. In this case, both the two two were eligible. 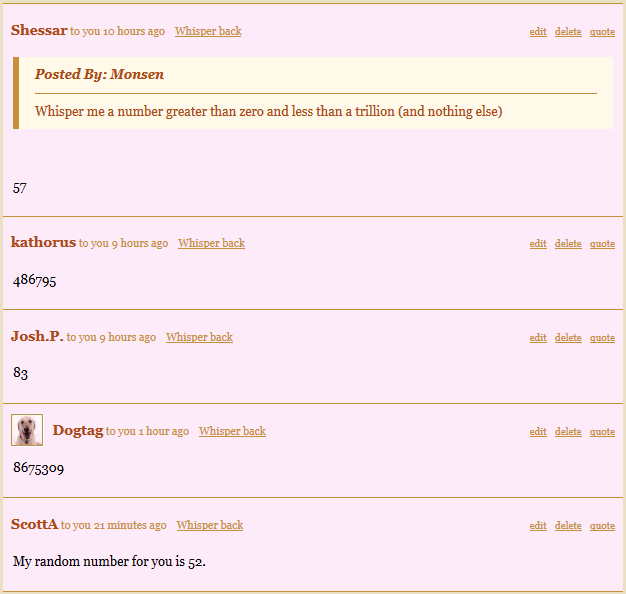