When @Monsen announced the latest Forum mapping contest, for a (winter?) holiday-themed postcard-sized map, I was deep in the latest part of my Community Atlas mapping project for Nibirum, and indeed still am, so wasn't sure if I'd have time to do something useful for this as well. But you know how it is when you start having vague ideas for something...

Thus away from any CC3+ mapping, I jotted down a few silly place-name thoughts. Since some early comments on the contest topic had suggested something holiday-themed appropriate to the place of origin would be suitable, I focused into aspects of the Christmas period in Britain, which of course include ghastly jokes, puns and other nonsensical daftness. I'm not sure how far all these may survive beyond these shores; however, it's too late now, as the map's done!

My original list of nearly 40 place-names was quickly halved, given how small a postcard-sized map would be, and then being me, I sketched-out by-hand on squared paper where all these places were going to be in a rough sense, based on random dice rolls. The square sizes were chosen based on an estimate of the size the symbols would be on such a small map, to hopefully avoid over-crowding.

I'd already decided I wanted to use the standard CC3+ Overland Vector Color style for the map, as I have a fondness for vector styles, and this overland style in particular. Vector symbols have the advantage it's often quite possible to add-to, amend or adjust existing symbols, or even create new ones, without them looking too awful, given my legendary lack of artistic ability...

When I began, I had the loose notion I might try and take a few screenshots for a WIP topic here, though I soon forgot all about that unfortunately, as the map started to come together remarkably quickly, after a few early tweaks to get the symbol sizing to look right. I created a few fresh tools, and tinkered with the Effects in places, though nothing very major or time-consuming. The latter needed adjusting mostly because the Effects had been set for a much larger mapping area, of course, while the former needed adding because for some unaccountable reason, the style's designer hadn't prepared for drawing whisky rivers and snowy roads in advance. Some people are strange 😉

Handily though, the style's symbols all have really helpful varicolor options for being snowy-frosty white in just the right places (with a couple of minor exceptions, where a few snowy flatter roofs had to be added by-hand). In barely a couple of hours, the basic map was done. It needed a few fine-tuning adjustments, but the longest task, once all the labels were added, was trying to work out the better colour combinations for those labels and their Glow Effect, so they'd stand-out nicely, without being overwhelming. That dragged on for over an hour, to the point where I'm sure I ended up more or less where I'd started!

And so we have Merry Old Christmas Town, British-ish style: 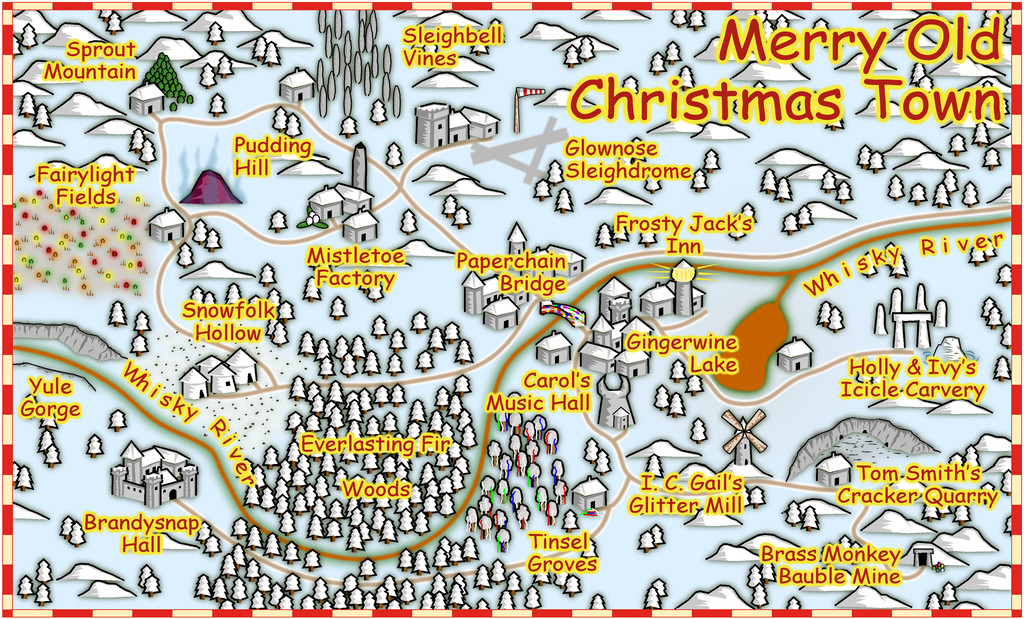