Those of you who follow the RPG world online will be aware already that all kinds of hell have been breaking loose in recent days, regarding the curious acronym "OGL" and its current and future uses. Those unaware of, or disinterested in, the RPG world - you're very fortunate; DO NOT get involved in this morass!

Consequently, a distraction was obviously in order. So I distracted myself away from my latest Errynor map (not sure that was intentional, however!), and was thinking about another recent suggestion from the online RPG world, with the equally curious acronym "D23". Essentially, the original idea behind this, which I think loosely expands to mean "Dungeon 2023", was to set a personal challenge for anyone interested to design a dungeon room a day throughout 2023, to end up with a 365-room megadungeon for those lasting the course.

As you may imagine, people have approached this with varying degrees of optimism, since trying to persist with this for an entire year is quite an undertaking, particularly given how unpredictable the broader events affecting everyone have been in recent years. Quite a number of folks seem to be giving it a trial-run during January, followed by a "we'll see..." beyond that.

Being no stranger to long-term projects, unfortunately, I learnt about this only on Dec 31st last year, which was a bit late to start planning anything! Several ideas have been mulled over since then though, a couple of which might be of interest to some people here looking for a less challenging way to participate in this project - maybe a small dungeon level a month, say, perhaps using one of the free online random dungeon designer systems to generate suitable base maps, or possibly one or more dungeons containing each a dozen rooms. These could be for contribution to the Community Atlas during the year, though some might need an outdoor area map preparing as well, depending on exactly where they'd be located. I'm sure some of our more active area mappers like Quenten and JimP could suggest some potential locations, for instance, if you can't find somewhere satisfactory yourself.

While this list won't be complete, these are the random dungeon generators I've become familiar with in recent times. I'm sure others here can suggest alternatives:

This latter site, also known as the "Robe of Useful Items", includes the old Wizardawn content as part of it. Wizardawn, as I've mentioned on the Forum before, is no longer available live online. Instead the OSRIC RPG site has a link letting you download an HTML version of the complete old site, which still works in a browser under Win 10 (at least - not sure about Win 11), though it is a little clunky to set-up. It contains a vast treasury of "Old School" style RPG features and random generators created by various people over many years, however.

So, what have I done? (Or should that be clasping-head-style, "On no; what have I DONE?!") Well, thus far, I decided a sort-of D23 dungeon for Nibirum wouldn't have 365 rooms, but 360, because of course Nibirum's year is 360 days long. So I generated a suitably-sized random dungeon using the Wizardawn system. This creates the map from a large series of old hand-drawn dungeon geomorphs, so comes out a little rough-and-ready, with the sort of imprecisions you might expect. Which I then traced into CC3+, along the way deciding I wasn't going to remove all those imprecisions, so not all the walls are quite straight, or always parallel to the one opposite, or wholly symmetrical, and so forth.

On that "Old School" basis - although personally, I still can't get away from the idea the style's quite new-fangled really (I come from still further away in time with RPGs, after all!) - I went with the Old School Blue Dungeon style from Cartographer's Annual 12. This is a very forgiving drawing style, and uses no effects, so despite the 700-foot-square size of the random dungeon, it only took a few days to put together, a bit at a time: 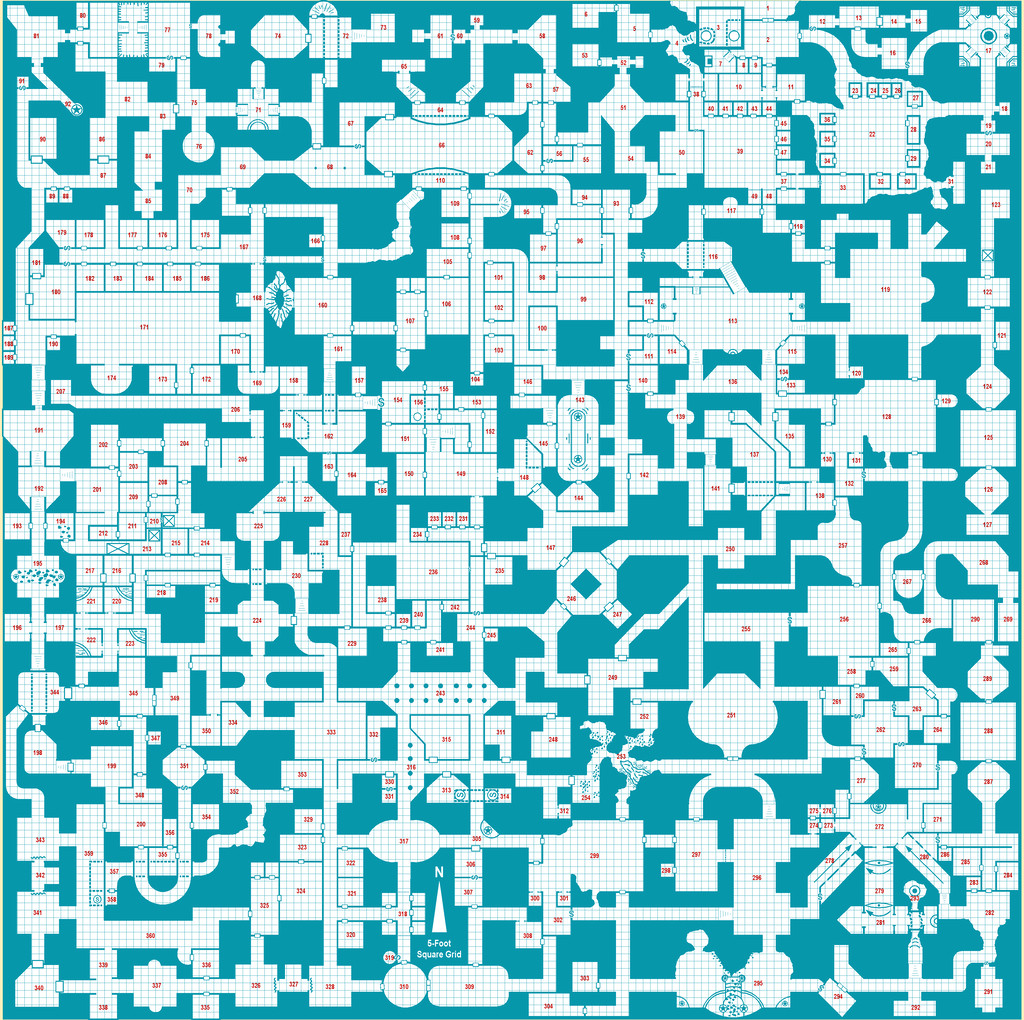 This is still work-in-progress, as even at this blurry scale, I'm sure you can spot some elements that need adjusting. I know I can! And if not, I've uploaded a larger version to my Gallery! Plus, I may want to add or amend details in places subsequently, once the content description is finalised. A symbol key will need adding as well, I suspect. Luckily, the Wizardawn set-up generates a vast amount of text data as well as random maps - albeit the description only has the same number of labelled rooms, and isn't fitted to whatever the random dungeon design plan looks like, so it takes some work to knock that into a shape that makes sense. Which may be where the "2023" facet comes in here!

That's all to come, but for now, it would be helpful if someone could point me towards a place on Nibirum where such a substantial dungeon might be situated. I'd thought about adding it to the existing Community Atlas megadungeon there, but as it's a megadungeon in itself already, that seemed counterproductive. Ideally, I'd like to place it somewhere that already has a suitable overland map at a small enough scale to show where a dungeon entrance could be, and while it's not firmly fixed, the original was chosen for "Mountains" as the nearby outdoor terrain during generation. It would be nice too to set it on a continent/landmass on Nibirum I've not mapped in before - so EXCLUDING Alarius, Kentoria, Ezrute and Peredur ideally (this is not a hard-and-fast rule, however).

There is an exterior entrance in a large cave towards the top right of the map (area 1), which has a heavily-walled military keep-like structure (3), and an external wall with a double door (the north wall of 2), and while I'd imagine the entire structure is no longer used by the people who originally constructed it, or not for the purpose it was first intended, at least, that may be something to bear in mind when looking for suitable sites on Nibirum for this to go.

More details to follow, if all goes to plan.