After completing Queen Mica's Scintillant Palace for the Community Atlas, I'd intended to move straight on to the next Errynor 250 x 200 mile map. However, it transpired that Remy was going to be busy with end-of-academic-year items through most of July, so I held-off submitting the Palace maps for a while, and ran into some problems myself. Thus I ended up distracted away from mapping for the Atlas for a time, and somehow found myself concentrating on the city of Providence in Rhode Island, as portrayed in the tales of H. P. Lovecraft from the 1920s and 1930s.

There's an astonishing amount of freely-available information to be found about many places online these days, and a project really just for my own interest in identifying some of the locations mentioned in a couple of Lovecraft's tales, soon grew out of hand rather, as these things do, and it became possible to find more and more seemingly obscure spots on older maps of the city, with information from numerous blogs and websites online, and even two quite recent hardcopy "Annotated Lovecraft" volumes edited by Leslie S. Klinger (formally, "The New Annotated H. P. Lovecraft", 2014, and "The New Annotated H. P. Lovecraft: Beyond Arkham", 2019, both published by the Liveright Publishing Corporation).

Of course, mappers must map, so it wasn't long before I wanted to try drawing some of these findings out in CC3+. After toying with half a dozen possible mapping styles from various of the Cartographer's Annuals, it was perhaps inevitable I would finally select the Cthulhu City style from December 2017, CA132. The choice was complicated by the facts that I needed both a substantial number of rail lines, and some means of indicating the city's topography. While the former don't feature in the Lovecraft stories at all, they're a very dominant presence in the maps from the 1920s and 1930s, although curiously, the Cthulhu City package doesn't have any tools for drawing rail lines (for all there is an illustrative rail station symbol). The topography is, however, a constant presence in both the tales and on the maps - not least as one of the main roads, Meeting Street, is actually broken in one place where the hillside is too steep, the road ends, and transforms in mid-street into a set of steps instead! Again though, "Cthulhu City" offers no assistance in this respect either.

Luckily, both can be accommodated very easily by simple lines of different colours with maps of this general appearance, and as I'd sourced an excellent map from 1935 by the Geological Survey of the US Department of the Interior, which had a complete street and railroad map superimposed on a 10-foot-contour topographic map, that was always going to be my starting place.

To keep things manageable and as clear as possible, the area involved had to be carefully chosen, and a couple of outlying places of potential interest had to be dropped quite soon in the process as impractically distant from the majority of important sites. Finally though, I arrived at: 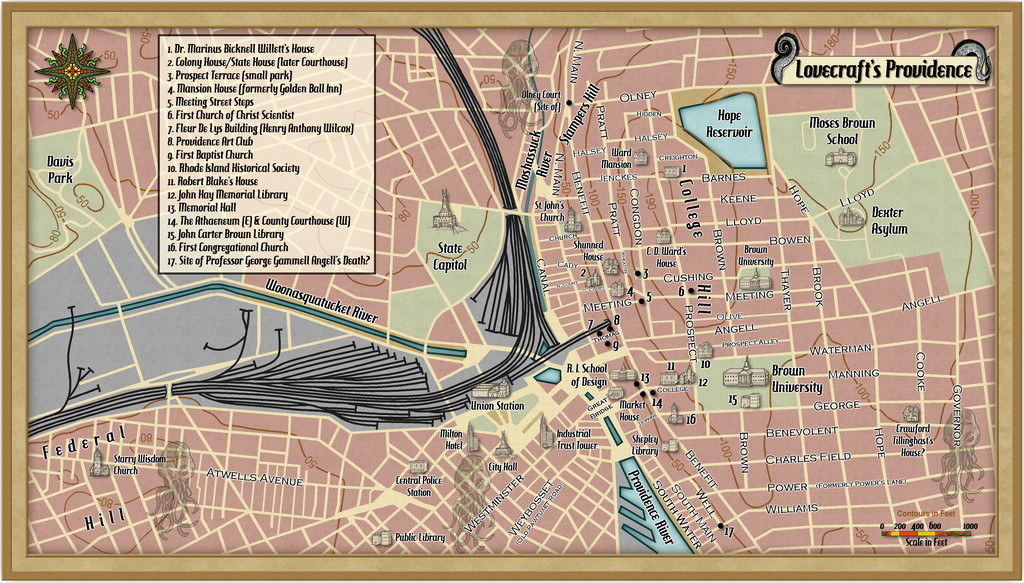 Naturally, this assumes viewers will have a degree of familiarity with the Lovecraft tales in question, namely "The Call of Cthulhu", "The Case of Charles Dexter Ward", "From Beyond", "The Haunter of the Dark" and "The Shunned House", plus one spot which is not derived from Lovecraft, the Milton Hotel in central Providence near City Hall, which came instead from the published "Call of Cthulhu" RPG scenario "The Shadow Over Providence". There's a little more information and commentary in this accompanying PDF though, which may help:

I've also added a higher-res version of the map to my Gallery, and the FCW file is below, should anyone wish to make use of this for their own "Call of Cthulhu" RPG-related activities. It does need the Hamburger Heaven font that comes with CA132, Arial from a standard Windows 10 installation, and the free Copperplate Gothic Light font to view properly: 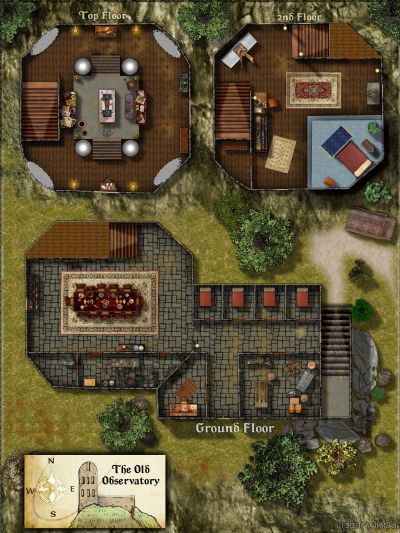