So, I'm returning to the coastal fort/town of Not-Conwy-Castle (having settled for the name of Barnacton Keep). The theory is that I am better equipped for the task, now, than I were a month back. Much of the "how" to do is incorported in the brand new sheet set-up (the Doodles & Drawings 2.0) which has proven very easy to work with for colourizing.

At 500 x 500 metres there will be plenty of space to practice urban environment, mountain/rocky terrain, coastal terrain, and somehow making some 80 000 m² of sea interesting. I am bound to get better at doing at least one of these over the course of the project! 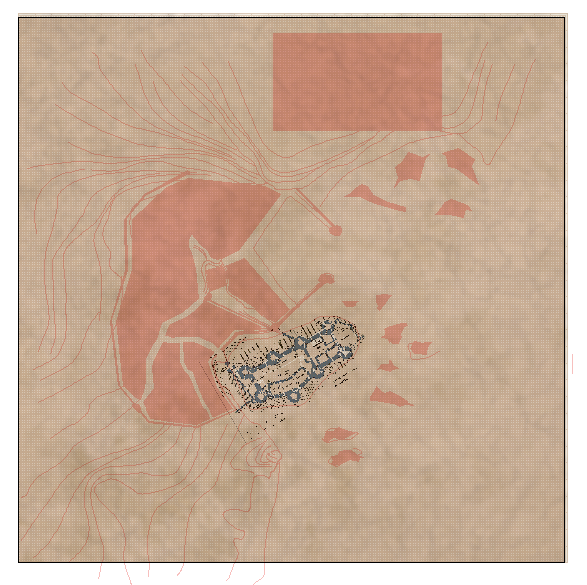 The "polystyrene phase" of getting the topography in was fairly quick. The mountains make up the west-to-north boundary of the map aswell as the town itself. Southwest corner will feature both the beach and slopes leading up to the plateau where the road is.

Cliffs in the water make landing any larger craft on the castle rock a perilous affair, and the port is not meant to harbour any vessels of sizes beyond the local fishing boats. I am thinking royal parties coming by way of sea having to go the last bit by shuttle is probably why Barnacton Keep isn't visited too often by the regent. Which likely is a fact also making it the highlight of such visits, for the the master of the keep: it's rugged country and the coffers aren't filling quite as quickly as they had hoped.

It's my understanding that streets can be the result of people building houses along a route to somewhere. And I want that for Barnacton Keep - too feel like it grew into existence, rather than the result of forethought.

Taking a step back, it seems plausible that the following could be reasonable considerations for that organic street:

So there is the topography, which determins the possible placement and shape of buildings which seem the least out of place with regards to the natural surroundings. In other words, how much landscaping was involved in the construction of the town?

Next, the points to be connected would presumably determine what type of trafic is to be expected which in turn informs what type of buildings are likely to be found - which also circles back to make a fantastic loop argument between points 2 and 4. All the best headaches are self-inflicted.

The quickest way to get the entire bundle of points 1-4 in one go seems to be negative spaces. And for that, I simply use Colour Key and start carving out paths that seem plausible. It's jumping to the end product - i.e. the structure of the system of streets - without the process of chiseling out any details beforehand whatsoever. I know that the port and castle need to be connected to the gate by fairly wide streets. But other than that, I am perfectly happy with just getting the outlines (eventuall) of the plots where I can then put houses together.