In theory, this ruins map was going to be one of the smaller, thus quicker, maps to draw. I wanted to add it to the set from Errynor Map 01 as it was the only Thalassan (Fish-folk) structure in the area, and it seemed useful to provide at least one sample settlement for each of the represented undersea humanoid folks shown on that map. 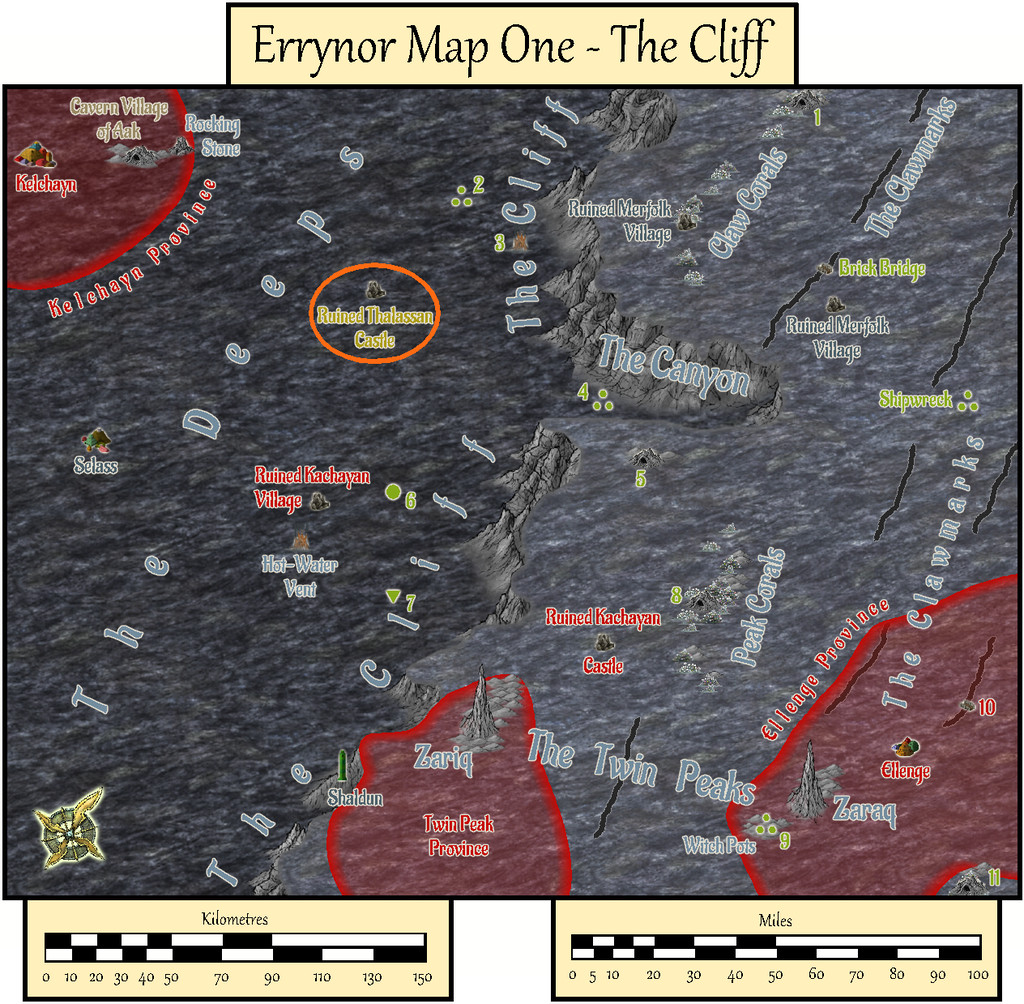 The overall pattern for it was easily established randomly from a few dice rolls, and I had already some ideas for its appearance, with whatever else might be concealed by the ruins. Given the site lies below almost 3,300 metres of ocean (nearly 11,000 feet), I wanted to use a black-and-white mapping style, in-keeping with most of the other deep-water maps in the set. It was though obvious that no style would provide the symbols I'd need for the structures, which would have to be hand-drawn. So I settled upon the Black & White Towns style by Pär Lindström from the 2015 April Cartographer's Annual, mostly because I thought the sketchy contour-line symbols in it might work well for the silt-covered rubble piles I'd envisaged as surrounding this ruin. While these did work out quite nicely, adding shading to give the rubble more definition took a lot more time than expected, particularly in showing the whole site in an elevation drawing as seen from the sea-bed. 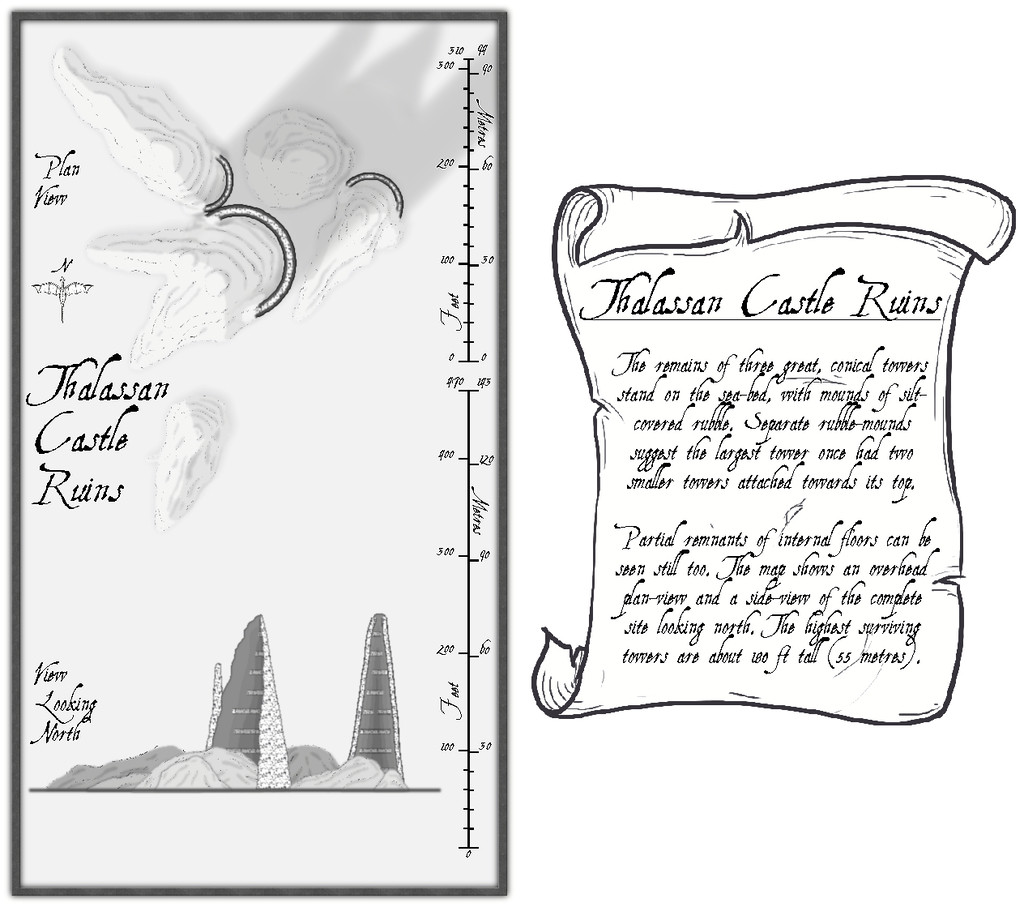 The font is AquilineTwo from the 2012 CA, as I originally thought to use the scale-bar symbol as well as the draconic north indicator from this style, and that's the font employed in these.

Clearly, there's a lot of blank space here, and the scale-lines look a little odd too. The reasons for both are explained by activating the Residual Magic toggle in the FCW file: 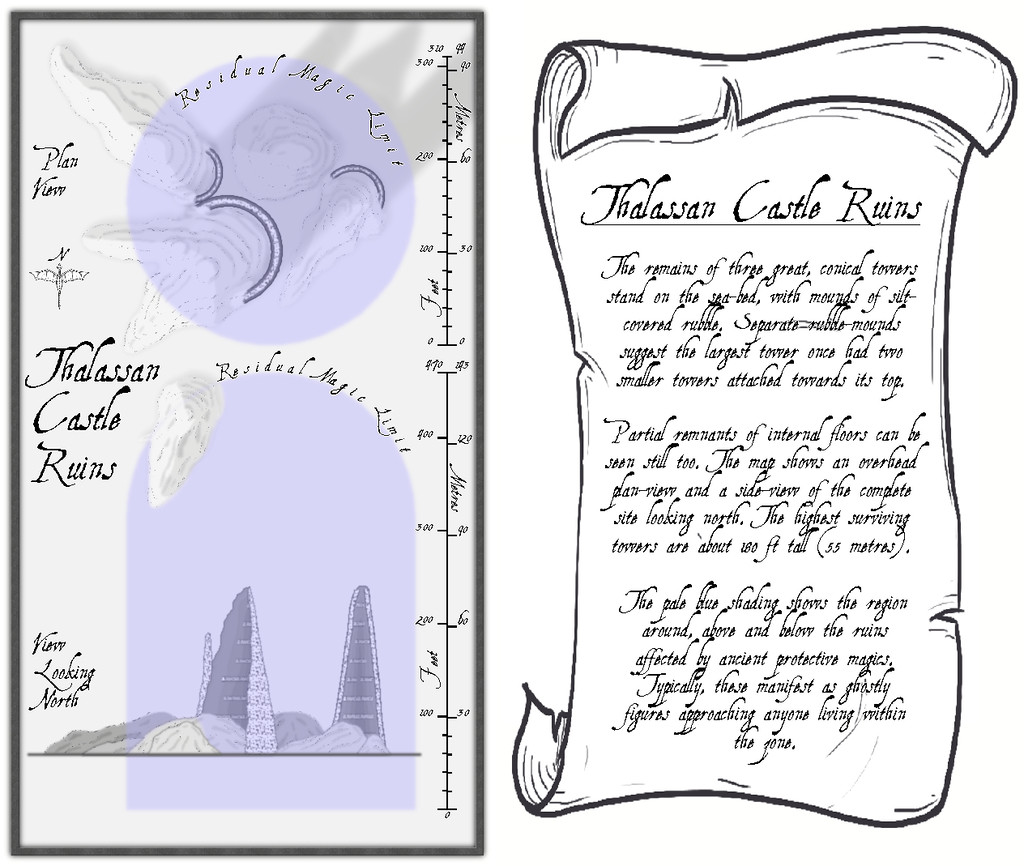 The explanatory banner text has also been increased here, although for clarity, those notes are repeated and expanded upon in the map's accompanying text-file and PDF notes.

As the magical blue glow extends some distance below the sea-floor surface, it's obvious there's something more happening there too, and activating the Subterranean Tunnels toggle shows what this is: 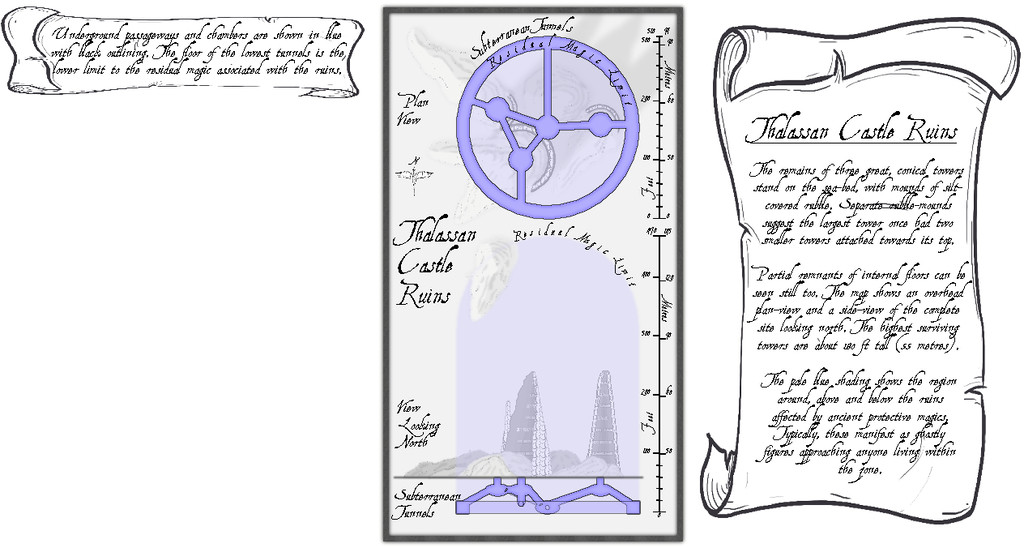 A series of subterranean chambers and tunnels, essentially, with a further banner note of explanation. The latter of course hints at still more to come, given the vast blank space beneath it. So activating the Original Towers toggle reveals...: 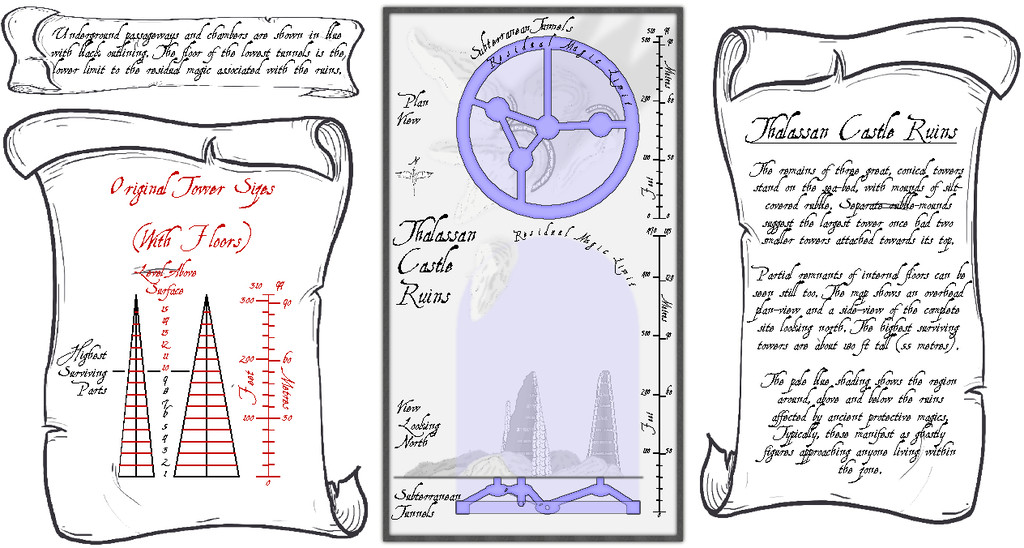 I'd had to draw out in advance what the towers would have looked like before they became ruins, to get the look, sizes and angles right, so it seemed probable this would be something other GMs might find helpful.

For the underground maps, I added a "concealer" Sheet with a Transparency Effect to reduce the strength of the surface features and magical glow for clarity, which is largely why the shadows on the surface views ended up so relatively strong, when the subterranean areas are hidden. Naturally, the shadows are unrealistic anyway, as there'd be ordinarily no light at all at such depth. Without them though, the drawings are much too flat, as some shadows at least are what the eye more or less expects.