Having spent much of 2020 preparing detailed maps and descriptions that often took weeks at a time to complete for the Community Atlas, it seemed worthwhile to tackle a less involved map at this stage, for one of the smaller projects I'd long had in mind as part of Errynor Map 01. There, it had the prosaic label of merely "Cave 8", the lair for a giant octopus set among the Peak Corals: 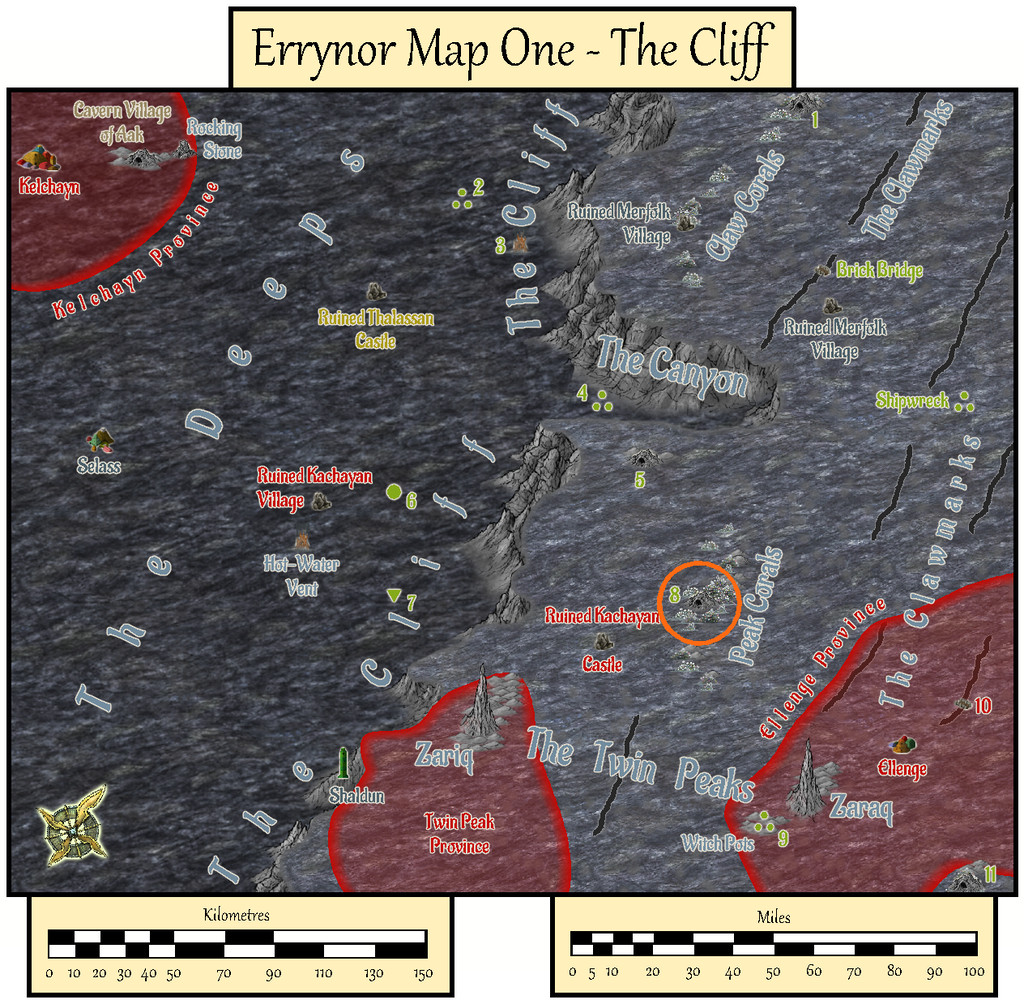 However, for some time, I'd intended to make it a little more than simply an animal lair. Indeed my earlier planning for the maps to add detail to this Map 01 area had included others of the cave lairs elsewhere on it too. As time passed, I'd discarded that prospect as liable to become too similar, either because I'd end up frequently drawing small cave maps, or because I'd be struggling to make each one somehow unique. So this map ended up with a concentration of elements from some of those "cancelled" maps: 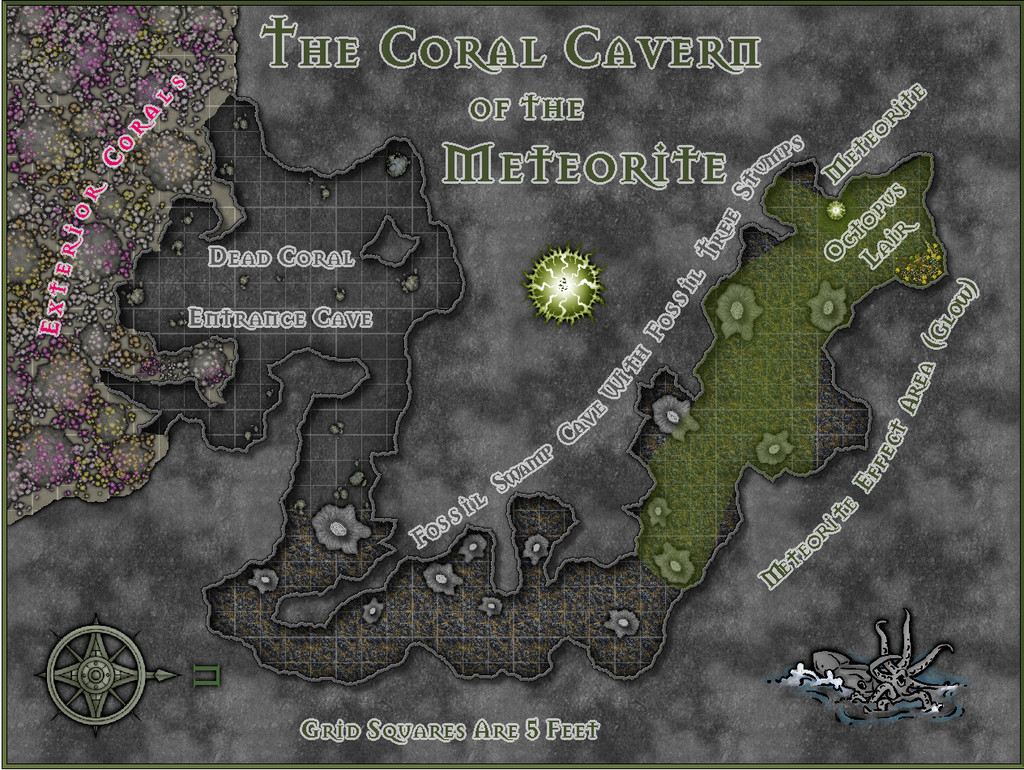 As the lair is set among the Peak Corals, it's not quite a "traditional" cave, as much of its entrance area especially has formed over time from gaps in the build-up of dead coral and other debris which has since solidified, with collapses and modifications by the more mobile creatures living on the reefs and within the cave system, along with the effects of nearby sea-bed gas escapes. Hence I decided not to use a mask to hide the outer edges of the walls here, and just let the shadow Effect from them fall where it might onto the normal Background Sheet, as a reminder the "walls" may not be really so defining as they might seem.

The inner parts of the cavern become increasingly weird. Despite being very far from land, in extremely deep water, and where the usual sea-floor rock is the typical once-molten black basalt, much of the cave floor is that of a very ancient, fossilised, swampy land surface, including numerous substantial fossil tree stumps. Once around the sharp angle, those with normal colour vision will be aware of a green light emanating from further north (north is to the right here for once). The origin of this glow is an even more ancient meteorite, embedded in the fossil swamp from when it was still a living swamp. It shines green, and is Not Entirely A Good Thing, shall we say. Its non-visual effects have led to the giant octopus that lairs here becoming tougher, longer-lived, more intelligent, and - as the substantial treasure hoard might suggest - far more acquisitive than others of its ilk. Much of its time, when not out hunting, is spent gazing contemplatively at the meteorite.

Much of the map was created from normal DD3 assets drawn over a random design from the Curufea's Random Cave Map Generator website, with a few tweaks. I did though add a couple of extras from the Mike Schley overland style - the octopus illustration and the compass rose - and labelled the whole using the Mason Serif Bold font that comes with CC3+. Before starting, I'd intended to use a lighting Effect for the meteorite's glow, but soon realised this would be impractical for the map to be useful as a GM's aid, so elected instead to use a simpler fading-glow look for the affected area, using sightlines drawn from the meteorite to establish where the "shadowed" parts of the inner cavern would be.

I added hand-sketched "tree-ring" lines to the tops of the DD3 stalagmites that were repurposed as fossil tree stumps, having already opted for the cooled lava fill texture to stand for the fossil swamp cave floor. The living coral masses outside the cave on the sea-bed were DD3 fungi and trees, including varicolor options, with added glow and transparency Effects to make them less fungal-floral. The overall look was chosen as deliberately near-greyscale and relatively dark, given the water depth here at over 750 metres (2,500 ft) is far below the depth to which sunlight can penetrate, in-keeping with my deep undersea mapping conventions, while hinting, with the limited use of colour, that things are also a little different here. And yes, naturally, the shadows are anomalous, despite being what the eye expects!