This is my first, more or less finished, city map. 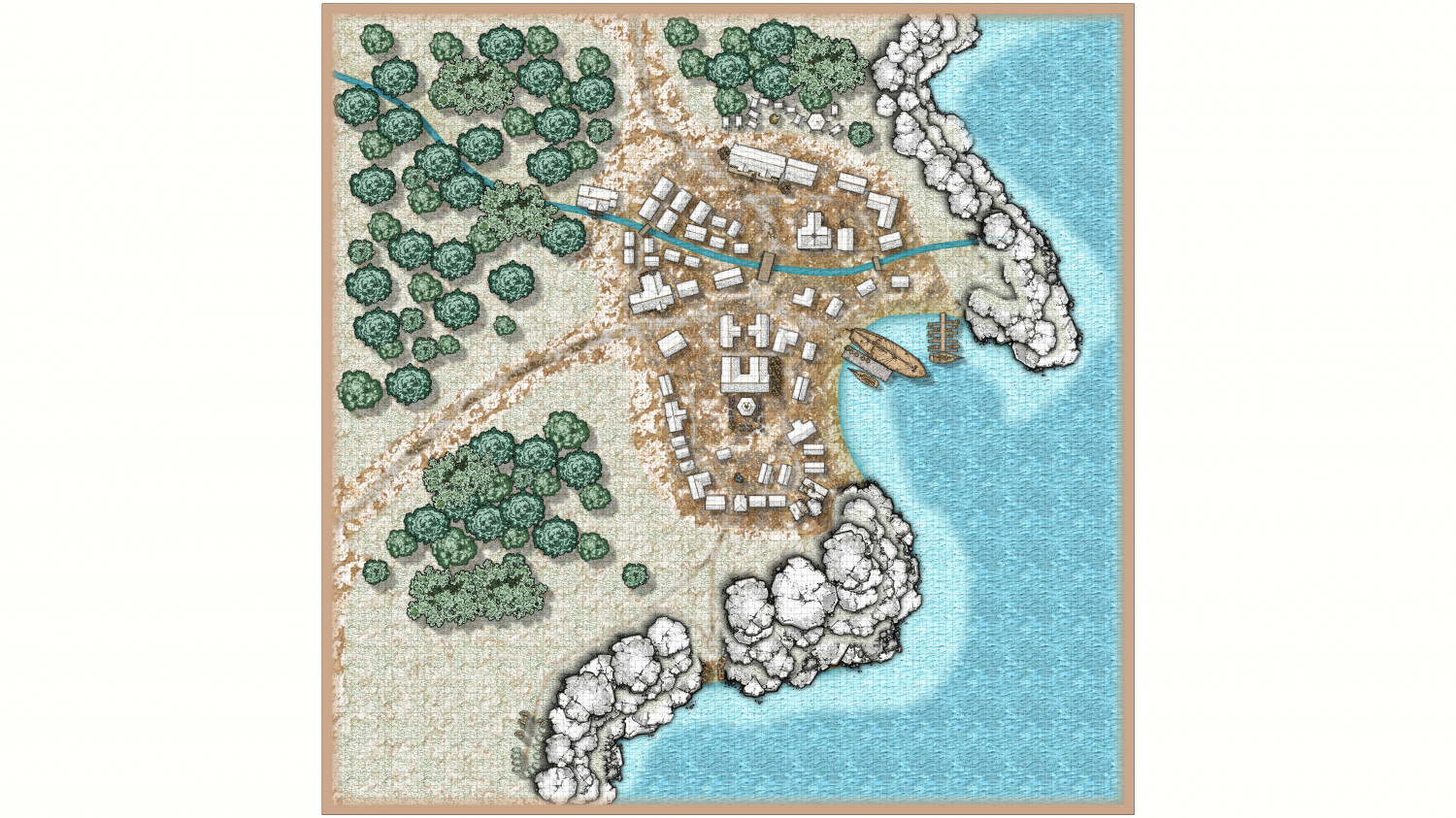 It's the small village of Woodland Harbor. It's going to be the starting village for my campaign, and it is about to get abandone by the villagers, because a seemingly neverending winter slowly turns this location unhabitable. It was a prospering village, its main trade was forestry and fishing. It has a town hall and trading buildings in the middle, a small inn, a tavern, a large warehouse and a recently expanded harbor. A lot of the villagers decided to flee this tragedy with that large ship, leaving that continent alltogether in search for a better location. The other villagers are putting together a large caravan to travel south-west, to other settlements and ultimately to the capital.

I'm quite happy how this map turned out, given that I just played around a bit before. I repainted some of the symbols and textures a bit to give it a wintery feel: Rocks, trees, graves and mud- and grass textures. I tried adding a cliff line and it worked reasonably well.

The 5ft grid is probably a bit too small for the comparativel large map, and I'm probably going to adjust that.

I had a little issue with the end/middle points for the roads because I don't know how to properly use them yet. But that doesn't really stand out because of the mud and street colors. Mostly in the south, on the street towards that small bay. I would have liked that those mud-grey roads are a bit more visible but I wasn't sure how to achieve that. But they are better visible after a high antialiasing render, but that had other issues.

The river is slightly visible over the cliff rocks but I already fixed that by moving the water sheets around.

The large ship was part of a docked wooden pier symbol, so I had to remove it to place it next to my stone pier.

I had the biggest trouble with the "edge fade inner" effects for the snowy grass area. I put that snowy grass onto the TERRAIN and another TERRAIN2 sheet. I can't describe it very well but I would have liked the snowy grass to be less opaque but also getting more opacity on a larger area towards the fringe of the snowy grass texture. As it is now, the border is a bit too abrupt and the snowy mud texture is still slightly visible underneath, even in the middle of the snowy grass. Which isn't a bad thing until you actually render it with higher antialiasing.

In the northwest, near the cliff, there's a sharp cut between the village area and the grassy area, although the grass is on the same terrain sheets. They are not part of the cliff sheets.

I thought of adding wooden pallisades but that didn't feel right.

I saved the map twice. The image above as a jpg without antialiasing. You can see the snowy grass nicely, but it is not as smooth overall.

The second one in the link below is a png with high antialiasing. I prefer the png one if it weren't for the snowy grass texture which nearly disappears completely. On the other hand, it slightly fixes the sharp grass edge near the river in the north eastern corner. Don't ask me how, some "edge fade inner magic" that I don't grasp yet 😅. Also the grid disappears but that might be because of the sheet effect. If I make it less transparent it should be more visible in the end. I guess?

I didn't change the sheet effects, except for the grid (opacity 20%) and the edge fade inners:

Ultimately I'm very happy how it turned out, I just have to get a better understanding of some sheet effects to smooth things out.