This map details the subterranean lair of the blue-scaled Kobalt tribe - essentially D&D's Kobolds - in the central uplands of the Isle of Zariq. 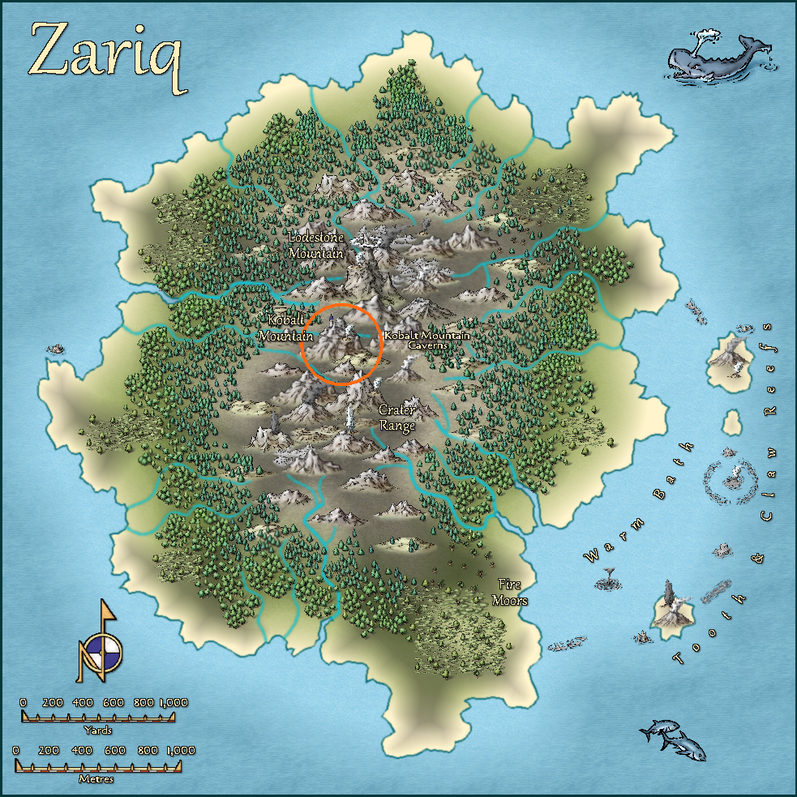 As commonly with my Community Atlas mapping, I opted for a random aspect, here regarding the layout of the caverns, which came from the Curufea's Random Cave Map Generator website. This online system creates its maps from electronic versions of tiles from the huge array of those drawn some years ago by artist Ed Bourelle of SkeletonKey Games (DriveThru RPG link). I like SkeletonKey's earlier tiles, as they have an appealing clarity, and allow the construction of more varied layouts and settings in a consistent style than just about any other set of printable tiles I've come across. The Curufea system shows you exactly which tiles from which set have been used should you need to rebuild the layout as actual printed tiles, plus the PDF images in the original files can be copied and pasted into other programs to set up a GM's map showing precisely what the final layout will look like. In my pre-CC days, this was a real boon!

For this map, I decided to try some large-area random options, and saved one of those that looked especially promising for what I needed. 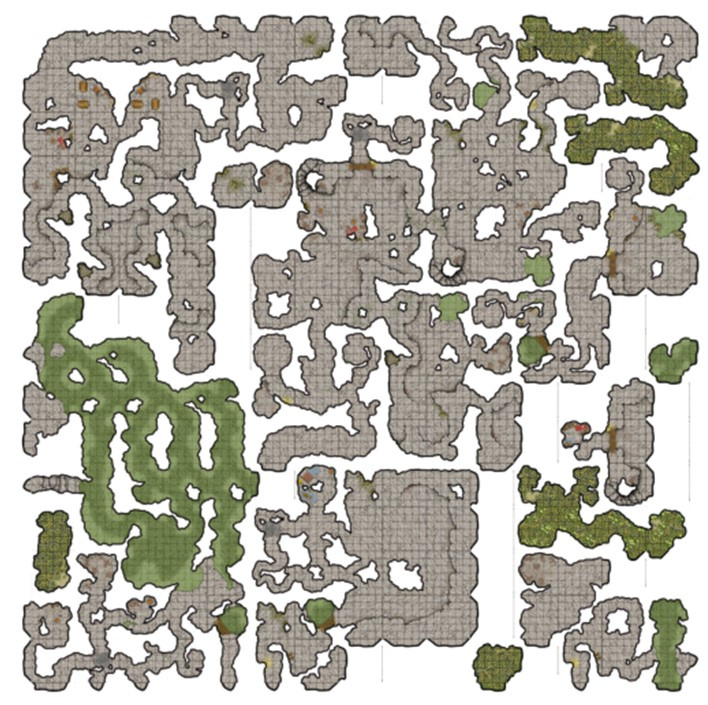 Of course, this random map ends up square, while the nature of the tiles means there will be several unconnected segments shown for almost all such layouts. However, by importing this base drawing into the CC3+ template, making several copies of it, rotated and moved around so different segments could be married up in the final version, something closer to what was required was achieved.

The map was always going to be quite complex. Having had a long fascination with kobolds, albeit initially in the form of the British folkloric mining goblins, I've been pleased to see how D&D's miniature draconic humanoid versions have developed under the system's 5th edition, with elements of those folkloric creatures incorporated. In particular, my ideas for this map were heavily influenced by the discussion and kobold lair map in Volo's Guide to Monsters (Wizards of the Coast, 2016, pp. 63-71). So there were to be wriggling, winding tunnels, sometimes crossing each other without linking at different vertical levels below ground, chambers with various functions, and many traps.

As another part of my Community Atlas mapping efforts has been to explore different styles, I opted for the Modern Cave Mapping style from the Caves and Caverns issue of the Cartographer's Annual, CA7 from 2007. Which allowed the creation of the map: 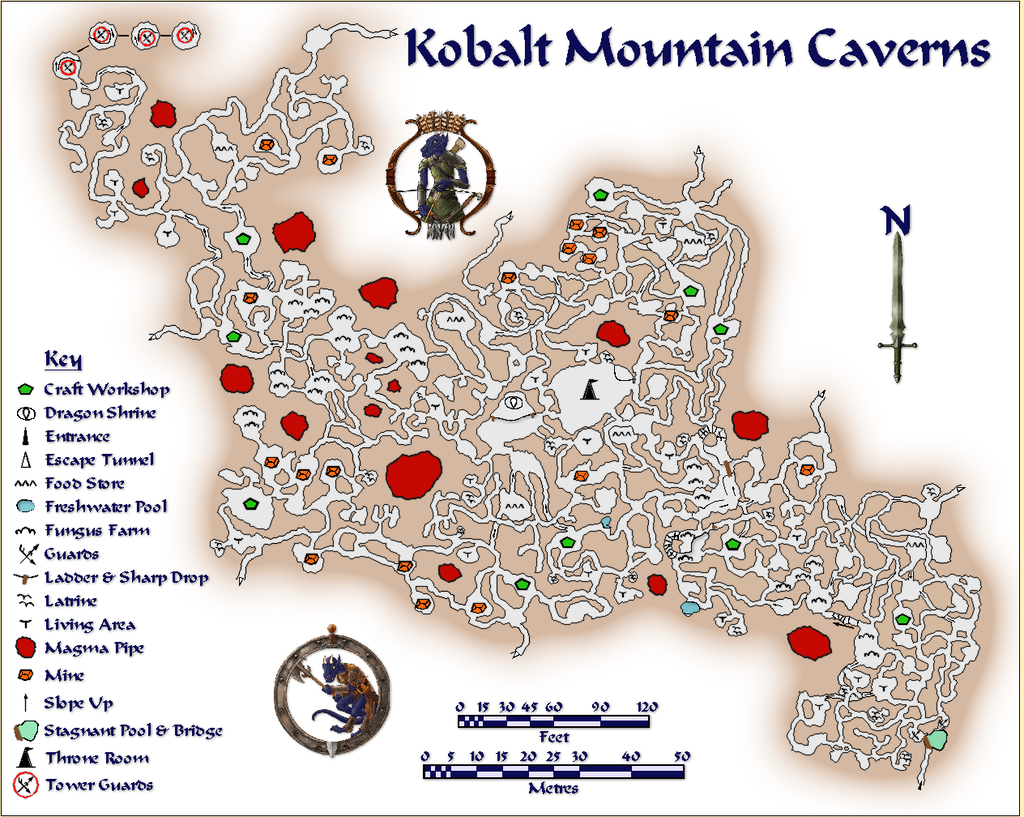 The layout was scaled and designed to fit to the locations on the Zariq map, as far as such things can be when translating pictorial side-view symbols into physical areas on a top-down plan. Consequently, the whole should be seen as sloping up gradually, if somewhat inconsistently, from the SE (lower right) to NW (upper left). The SE segment, where the entrance is, is set mostly below the "hill" symbol on Zariq, while the bulk of the Caverns lie beneath the "mountain", so the "tower" shown on the mountainside equates with the multi-level rounded cave fitted with a sloping spiral ramp inside at the top left of this map, where the "Tower Guards" symbols are.

While some of the usual Modern Cave Effects were tweaked or changed in places to better suit here, the light brown glow effect for the solid rock was left at its normal level. On a more typical map size, this would make it fade away in the larger enclosed rock areas, and at a shorter relative distance from the outer walls. However, it seemed to work better left like this to me, as it helps to emphasize the narrowness of the tunnels and smallness of the caves. Similarly, the Key labelling was deliberately scaled as larger than necessary to continue that impression. Kobalts are only about a yard/metre tall, and their tunnelling naturally matches their stature. Adding a couple of varicolor Token Treasury symbols made sure nobody might be mistaken about the nature of Kobalts!

The composite method of constructing the final layout where sometimes tiny patches of floor texture had to be added to link passageways, together with larger areas of passage and cave floors to create the illusion of under- and overlying cavern sections, meant the usual method of adding a grid - by copying the entire floor only onto the Hex/Square Grid Layer, and converting the floor fill to a suitably-sized grid - wouldn't work. Or rather it would, but the grid became inconsistent, sometimes with overlaps, across the entire map. After several tries to create a single polygon from these disparate segments, I was still unable to get the whole to work together properly, so opted to cut my losses and simply hand-drew the entire grid instead: 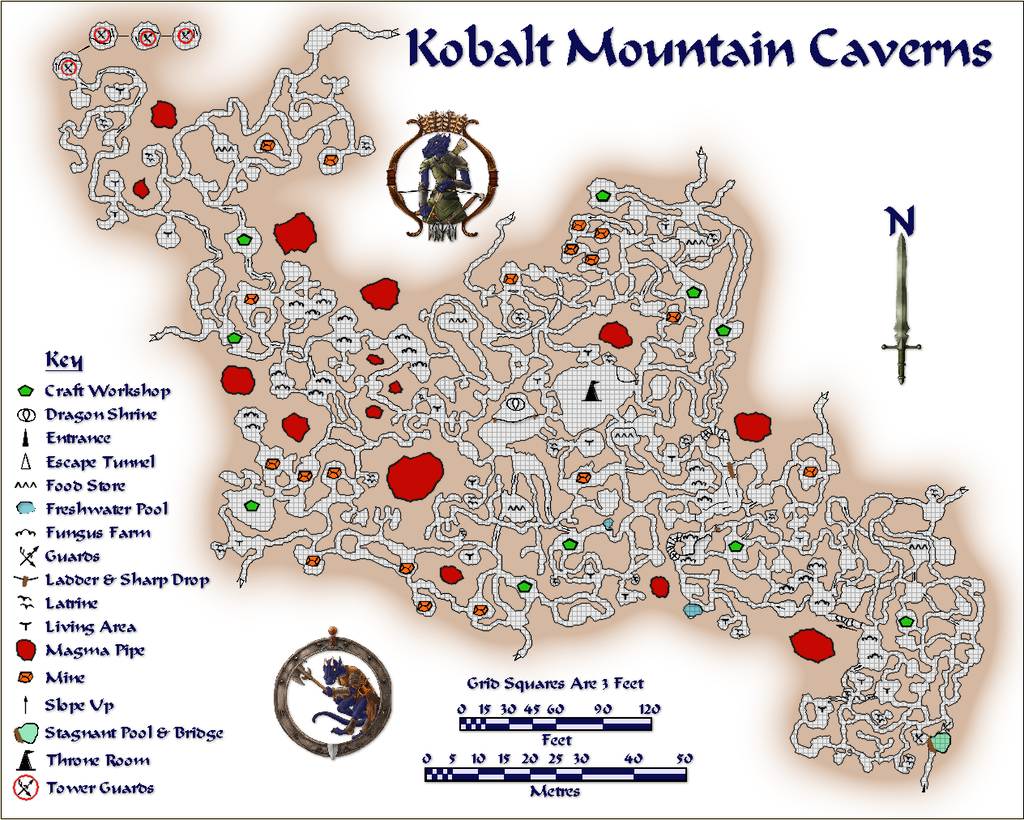 Yes, it's a three-foot grid. I found a five-foot grid was too difficult to read in the passageways especially, so after a very brief experiment, changed it. As that's a yard, it could be easily restated as a metre-grid instead, though for precision, that's actually closer to 0.9 metres, of course. Well, that was my excuse for not drawing a metric grid as well (that's a h*ll of a lot of lines to draw and trim to entity once...). I did though add the two scales to help in estimating greater distances.

Then I added the traps: 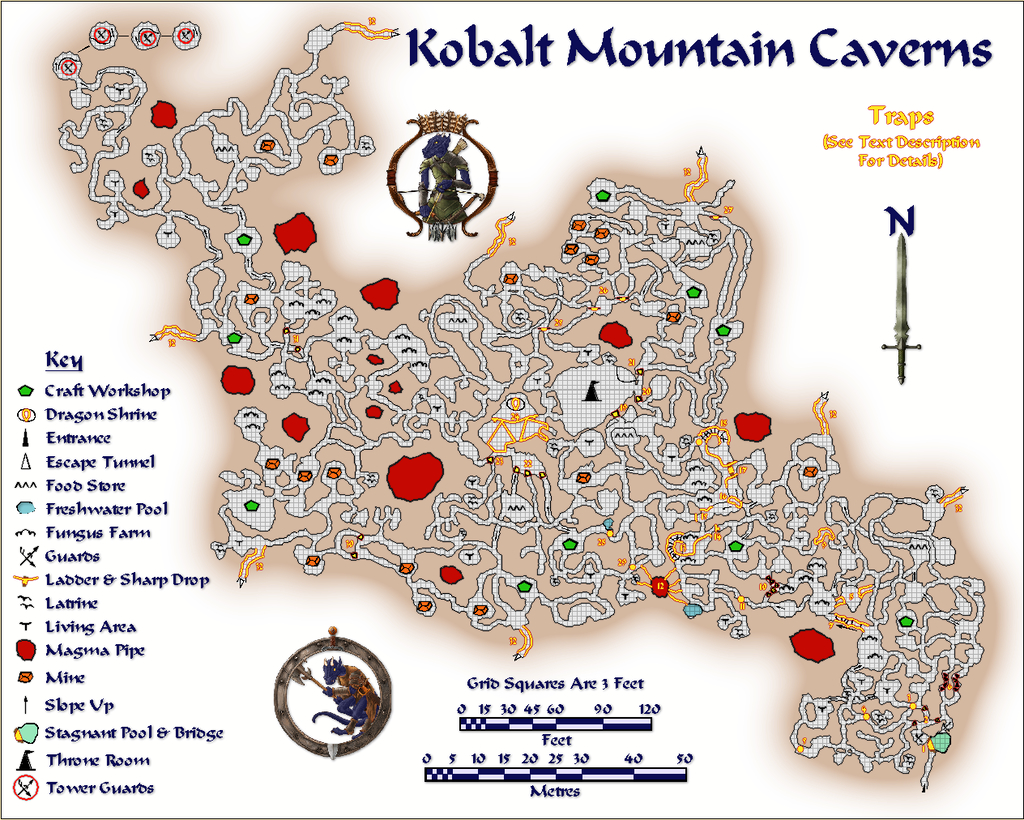 These were allocated a numerical key whose description, with other details on the Kobalts and their lair, are included in the map's accompanying PDF and text files for the Atlas. The idea is that both the grid and traps will be accessible using toggles in the final Atlas map.

Should you spot a similarity between this map's style and that used for "The Hive" maps I entered for Lorelei's Mapping for Dice competition a year ago, that's partly because they are the same; and yes, my choice for those Hive maps was heavily influenced by having worked on this map some weeks earlier!