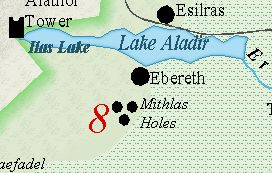 Plains and scrub ? Any forested areas ? I see the Laranion forest to the east.

I measured the distance and it is about 12 miles between Mithlas Holes and Ebereth.