Wyvern 🖼️ 22 images Mapmaker
February 2019 in Show and Tell
Towards the end of the Nibirum night sky and solar system construction and mapping process in March-April 2018, I decided to try some mapping of the planet itself. Rather than do this from scratch, I opted to reuse and rework parts of one of my more developed D&D-style game-worlds, adding various extra elements from ideas and notes that have been waiting up to decades for some action. I picked this seemingly quiet corner of northwestern Alarius, as I needed a particularly magical location for parts of this to work (Alarius was noted as being so in Shessar's original description of the continent), and the general region fitted better with the more or less temperate-colder, loosely north European, setting for which much of my earlier world had been intended.

Since all my previous Community Atlas mapping has involved a degree of randomness in its development, and as I work better from the ground up in terms of detail needed for such settings, I decided too to revisit and revamp some of my old random wilderness design tables for this project. These were based on those through to 1st edition AD&D, and especially the many random design tables scattered across the original Judges Guild products, created for the earliest D&D system back in the 1970s. The Judges Guild tables were intended to work with 5-mile hexes, so I adopted that as my basic scale-point here, altering it to squares to avoid the half-hex problem around the map edges. As the area I'd selected was 2000 by 1000 miles in extent to fit what I had in mind, this was swiftly broken down into 40 sub-areas, each 250 by 200 miles in size, and each of those was then split into 50 by 40 5-mile squares (yep, that's 2000 squares per sub-map...). I hand-sketched the basic landforms and vegetation features from the main Alarius map onto sheets of suitable squared graph paper, and then started rolling dice, given this is half the fun of random RPG area design! This took a few months, what with tweaking the tables and occasionally devising fresh ones for things I'd not initially thought of, rolling the dice, working out what they meant, and keeping track of all this on the paper maps.

After some consideration of the random results, slotting-in the various cultures and realms I'd intended, and adjusting the prep maps accordingly, the real mapping started. I wanted to use a CC3+ style that would let me try a number of unusual ideas without worrying about possibly needing to create loads of new symbols, as well as one that I didn't think had featured in the Community Atlas so far. This led me to the Fantasy Realms style from CA26, the February 2009 Annual issue. This wasn't because of nostalgia for the use of its original in the earlier D&D products, as I never knew of it then, given I'd already moved away from the published versions of D&D by the time it appeared. Instead, it was because it's not dissimilar in places to the general style and top-down views of most of my own pre-Campaign Cartographer mapping going back to the '70s, so it felt comfortable to me for what I had in mind.

What with all the preparation, and real life frequently getting in the way badly, the final map took longer than I'd hoped to complete, but at last here it is, just in time for the Community Atlas' second anniversary month. Well, one version of the map (see below):

There's a scatter of more populated realms, other settlements dotted hither and yon, along with ruins and oddments to investigate, and a clutch of place-names to conjure with, not to mention zones for the migratory large herbivore herds to traverse (along with their nomadic humanoid hunter followers). Plus a variety of terrains to explore, a swathe of ice-cap coolness, and the odd small island or so. I added a couple of scales for both kilometres and miles, as although the map was designed in miles, I know some folks are more comfortable working with metric values. Copy quality's not great in this image, but I couldn't remember what I could get away with for image sizes on the Forum, so if you want to read some of the smaller labels, you'll have to wait for the FCW file - sorry! (But again, see below too.)

The keen-eyed among you will spot the absence of a compass rose. Well, yes. It's a big area, so there isn't just one "north" direction for the whole map. Instead, I added an option via the SOLAR/GEOMAGNETICS Layer to display a latitude and polar auroral zone overlay, thus:

From which we discover the area runs from about 44° to 68° North, and that almost the entire region lies beneath the polar auroral zone. Ooh, pretty lights in the sky!

Of course, the appearance of the 65° N line also means that's where the midnight sun can be seen in midsummer, and the ice-caps remind us it'll be cold in places, so I added another couple of Layer options to show the mean maximum winter sea ice (the extent it reaches shortly before the spring thaw):

and the severe winter maximum limit:

These are based on the suggested sea ice extents in this Forum topic from 2018.

As there's quite a lot going on across the map, it needs a key (OVERLAND KEY Layer option):

Let's now zoom-in and examine some of the detail around the ice-cap.

There are some unexpected features in places. All quite deliberate

But that's a lot of ice. Makes you wonder what might be happening beneath it all, perhaps. Luckily, by hiding the ICE SHEETS Layer and activating the SUBGLACIAL LAND Layer, we can find out:

A lot of frozen land and glaciated river valleys. Oh, hang on. Isn't there a massive coastal bay there too, hidden by the ice? And WHAT are those two "Lost World" areas all about? Well, there's a stack of textfile notes to accompany the map that'll start to explain things a bit more (also provided as a 28-page PDF). Thus we need an extra key for these concealed features, which magically appears too, once the SUBGLACIAL LAND Layer is active:

I separated the keys from the map border to make it easier for anyone wanting to printout or save image copies of just a key or the map, incidentally.

These two keys' asymmetry is a bit of a giveaway that there must be more hidden here, such as below that awfully large amount of sea cover. So let's take out the SEA SURFACE Layer, turn on the UNDERSEA LAND Layer, and...:

So that makes things a little more complete. I've long wanted to map an undersea area. Ever since Dave Arneson's "Blackmoor" supplement to Original D&D encouraged the use of underwater places, they've been available for those who want them in RPGs, though they've never been all that popular in published materials sadly, for all that a fantasy setting naturally invites exploration of every possible environment. This proved the most challenging aspect of the whole mapping process in fact, because it's not something that's been attempted at this kind of scale and level of detail for the real world, or even for fantasy RPG worlds, so it meant heading off into the unknown rather, which was certainly interesting. I reused Shessar's original undersea contours, and adapted and amended them to actual underwater depths. This is because depths are essential for determining aspects such as sub-ocean light levels, and thus how deep photosynthetic vegetation can grow, as well as where organisms like cold-water corals may be, as most of these first appear only around 200m down, circa 660 ft, and continue downwards from there. I added an inshore 30m contour as well (100 ft), because this is as deep as giant kelp grows in Earth's oceans, and that's what produces the great undersea forests in places. The first huge cliffs of the continental shelf's edge just appear in the top left corner, where the seafloor plummets for maybe a couple of thousand metres in places (6,500 ft +). These contours also fit pretty much with the depth levels as commonly mapped for Earth (where any undersea contours are shown at all, as there's just so much uncertainty about Earth's seafloor even in the shallower zones near land very often). Of course, there's a lot of life for adventurers to encounter below the sea too, which also explains that weird political border of the Fireshore Alliance covering so much out to sea from the first map above onwards, aside from all the new ones under the waves.

Naturally, I had to add a hint of ocean currents as well, on the OCEAN CURRENTS Layer:

Plus toggling that SOLAR/GEOMAGNETICS Layer also allows you to see what's where underwater as well as on land, should you need it:

Then I thought it would be interesting to offer the option of a LAND MASK Layer for how Errynor might be mapped by the sea-dwellers, using the same convention as the blank sea surface usually is for land-dweller maps:

I also turned back on the ICE SHEETS Layer for this view to show how some of the land ice extends over the sea, including above Ice-Roof Bay.

Using other Layer options, we can hide the MIGRATORY HERDS overlay, and the separate POLITICAL BORDERS one on land as well:

The sub-sea borders are a little trickier, as they need their individual Sheets, UNDERSEA BORDERS and UNDERSEA BORDERS TEXT, hiding to show the map without them (the OCEAN CURRENTS Layer has also been hidden in this view):

Still not quite done yet, as there's one more overlay that can be added, to show the Cloudland Platforms that sometimes connect parts of the higher solid surface with the magical, largely extra-planar, world of the clouds, via the CLOUDLAND Layer:

Doubtless the perceptive among you will have probably guessed already that those two gaps in the overland and undersea keys are filled by the Cloudland and Ocean Currents keys respectively, when their own Layers are active:

So, quite a bit to explore already. I'd better get on with the 40 maps to detail this one now - that's the next plan, at least! 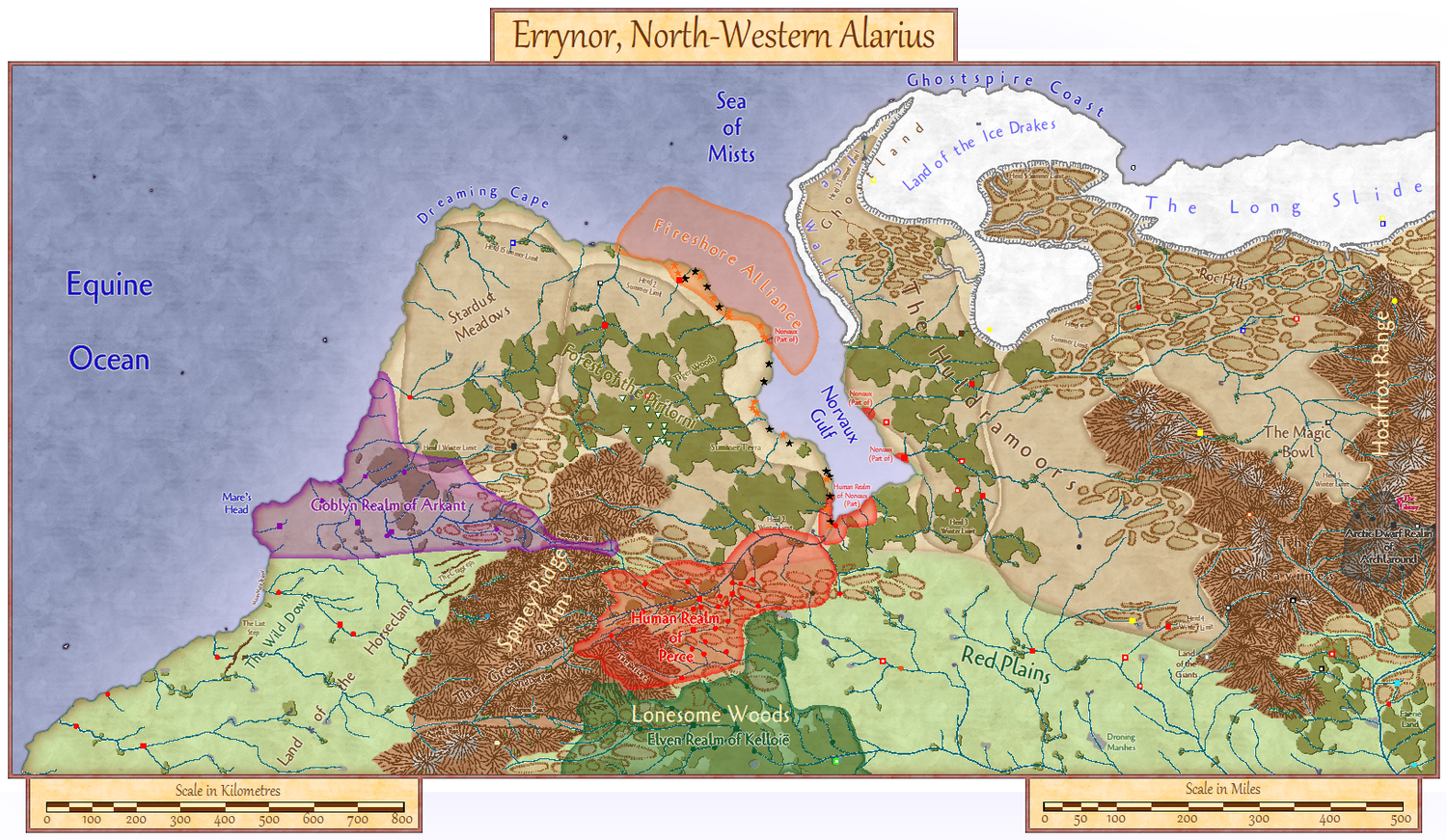 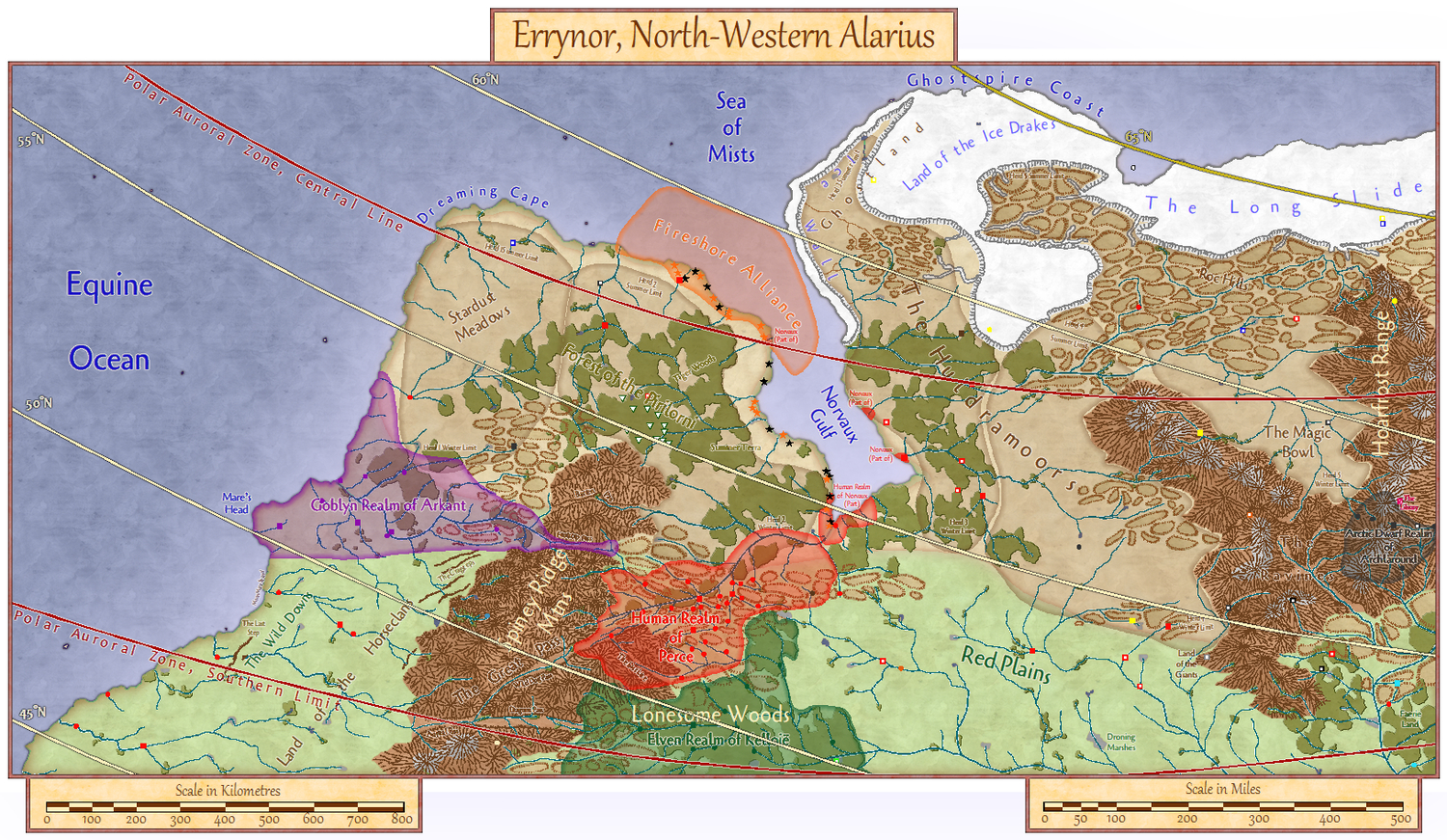 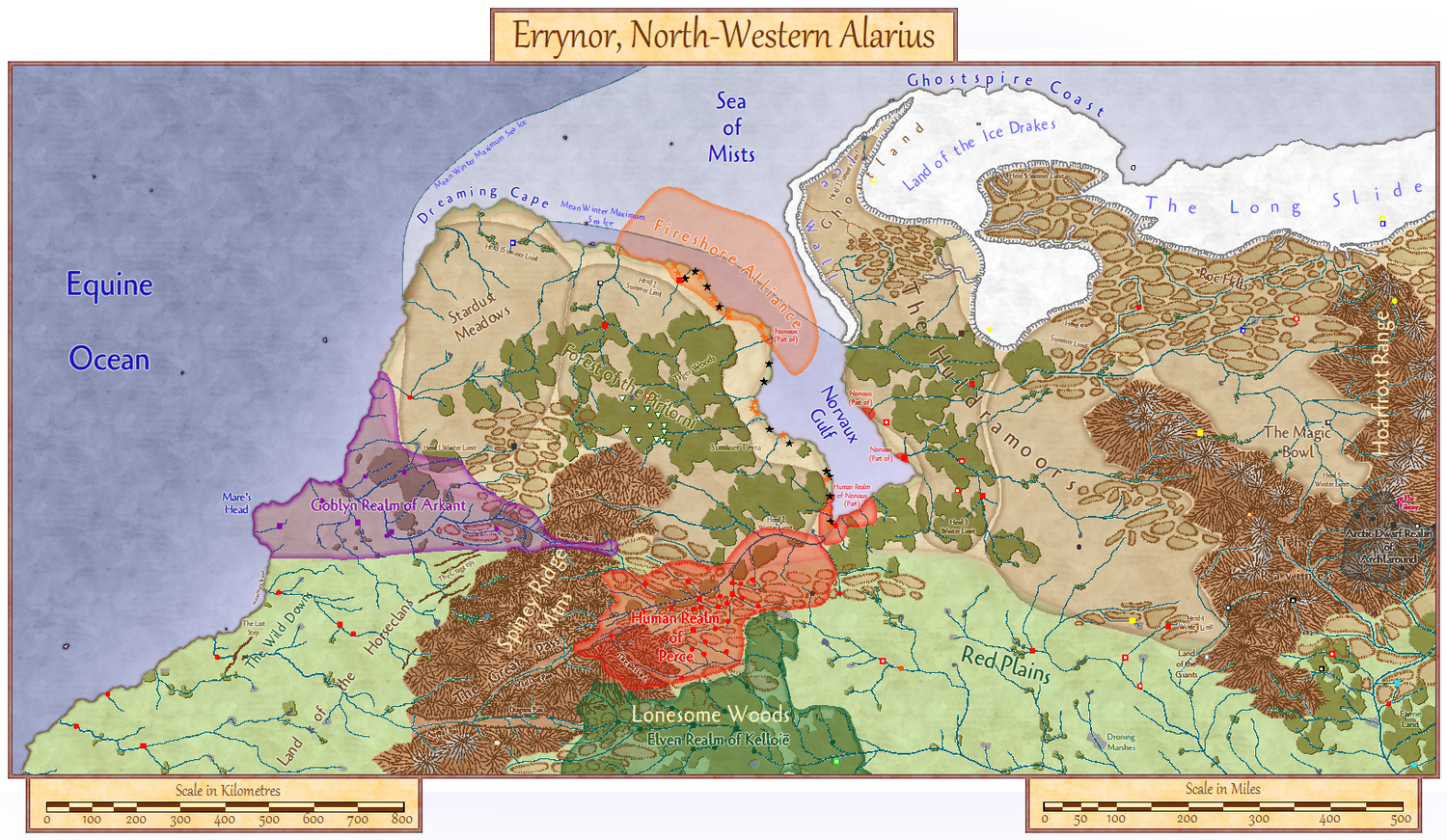 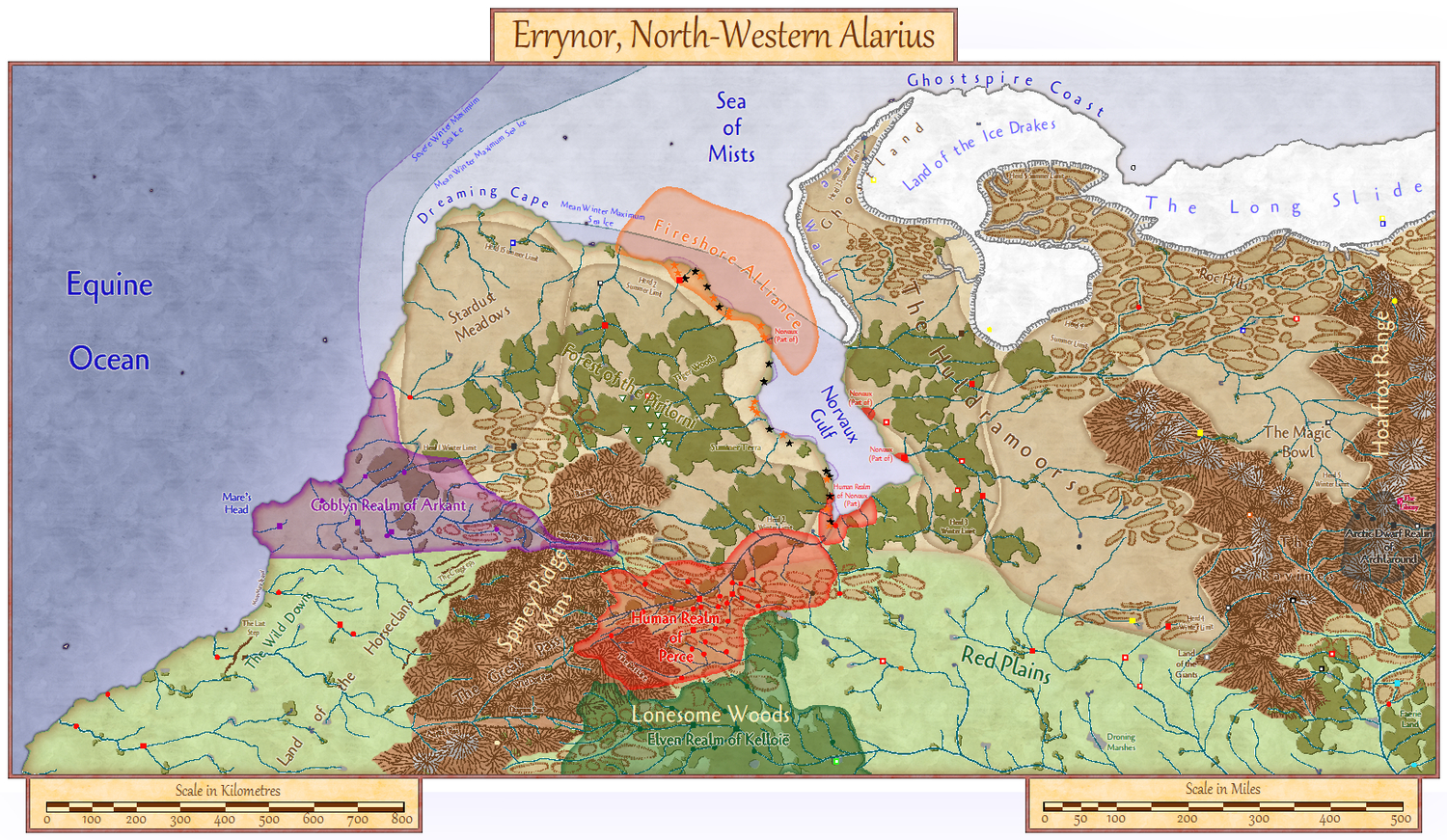 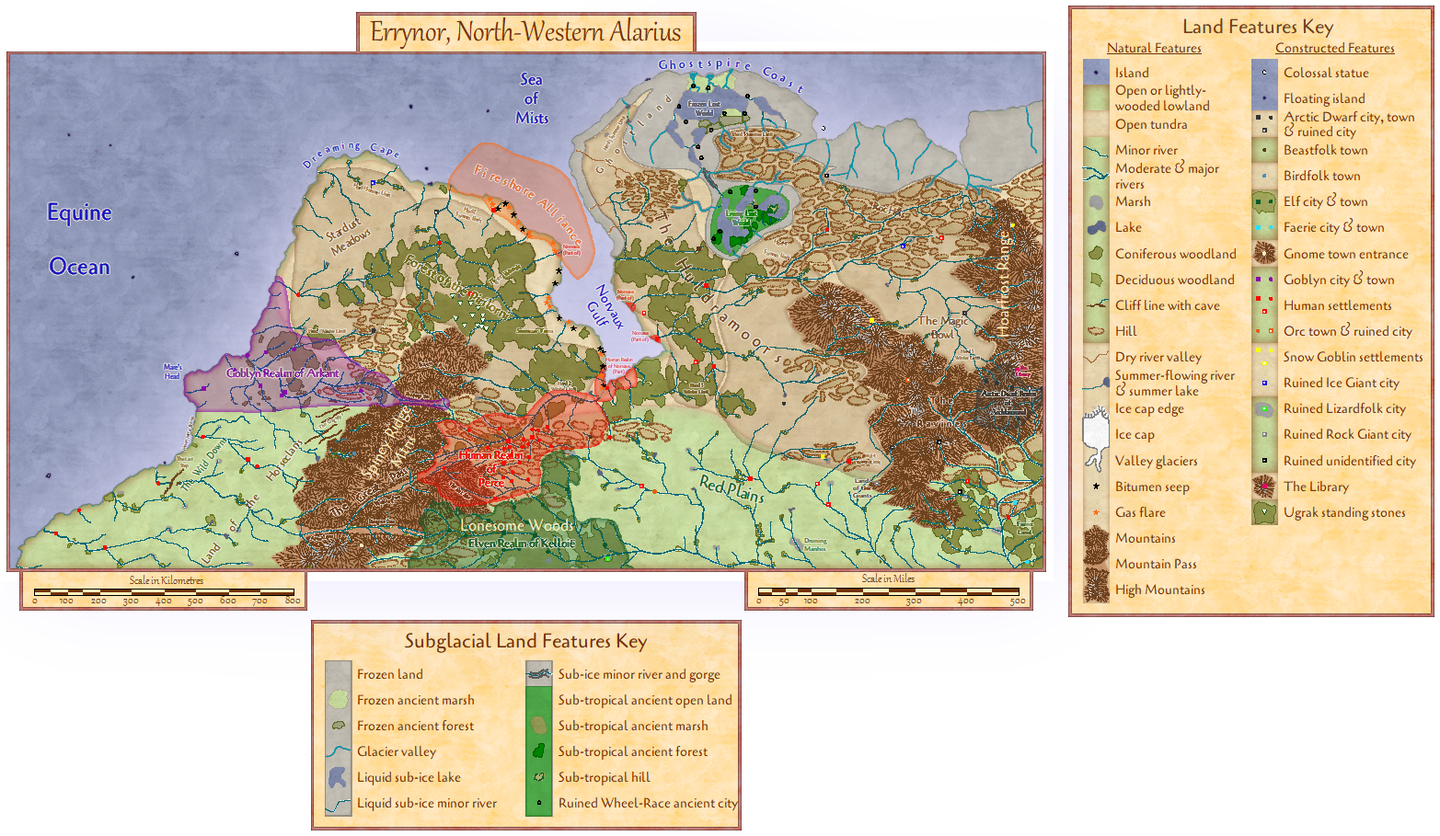 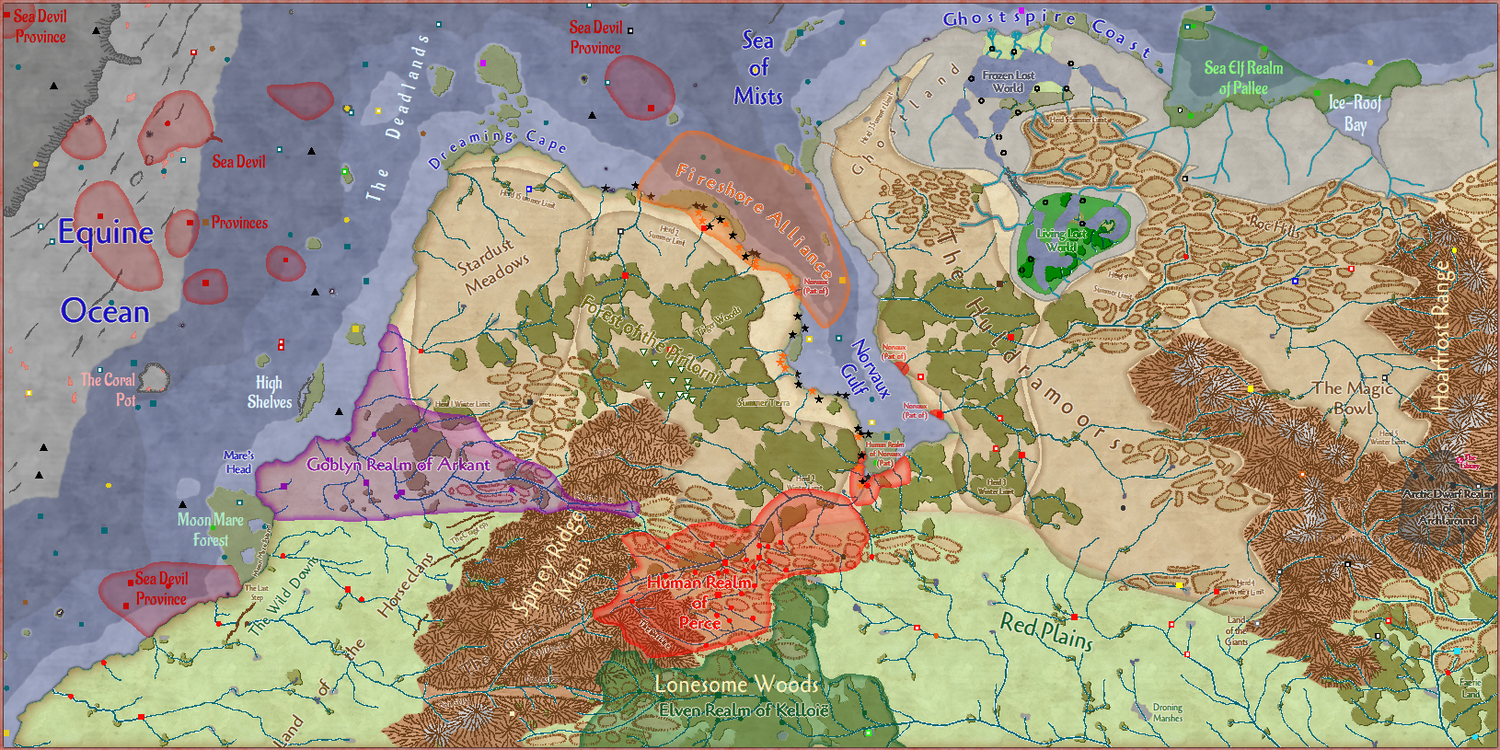 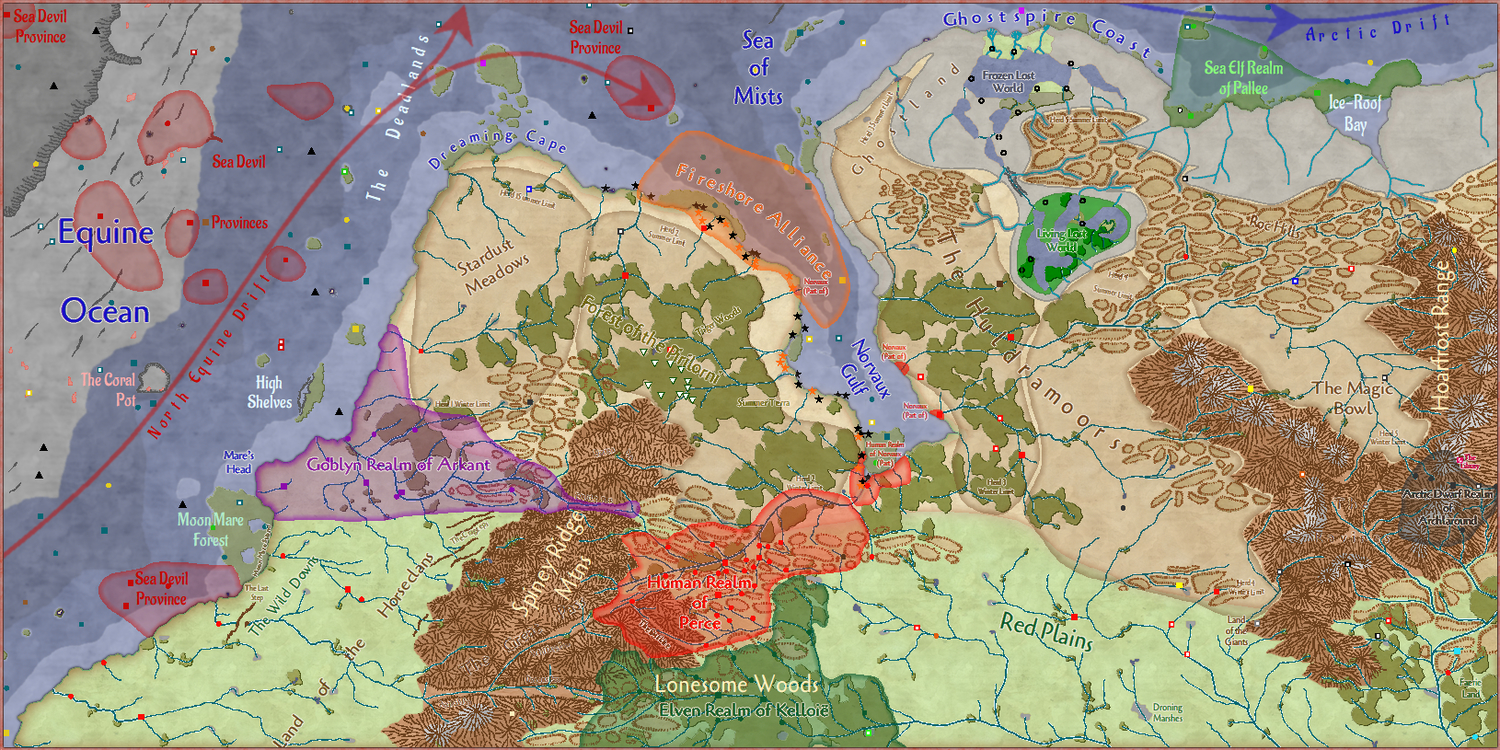 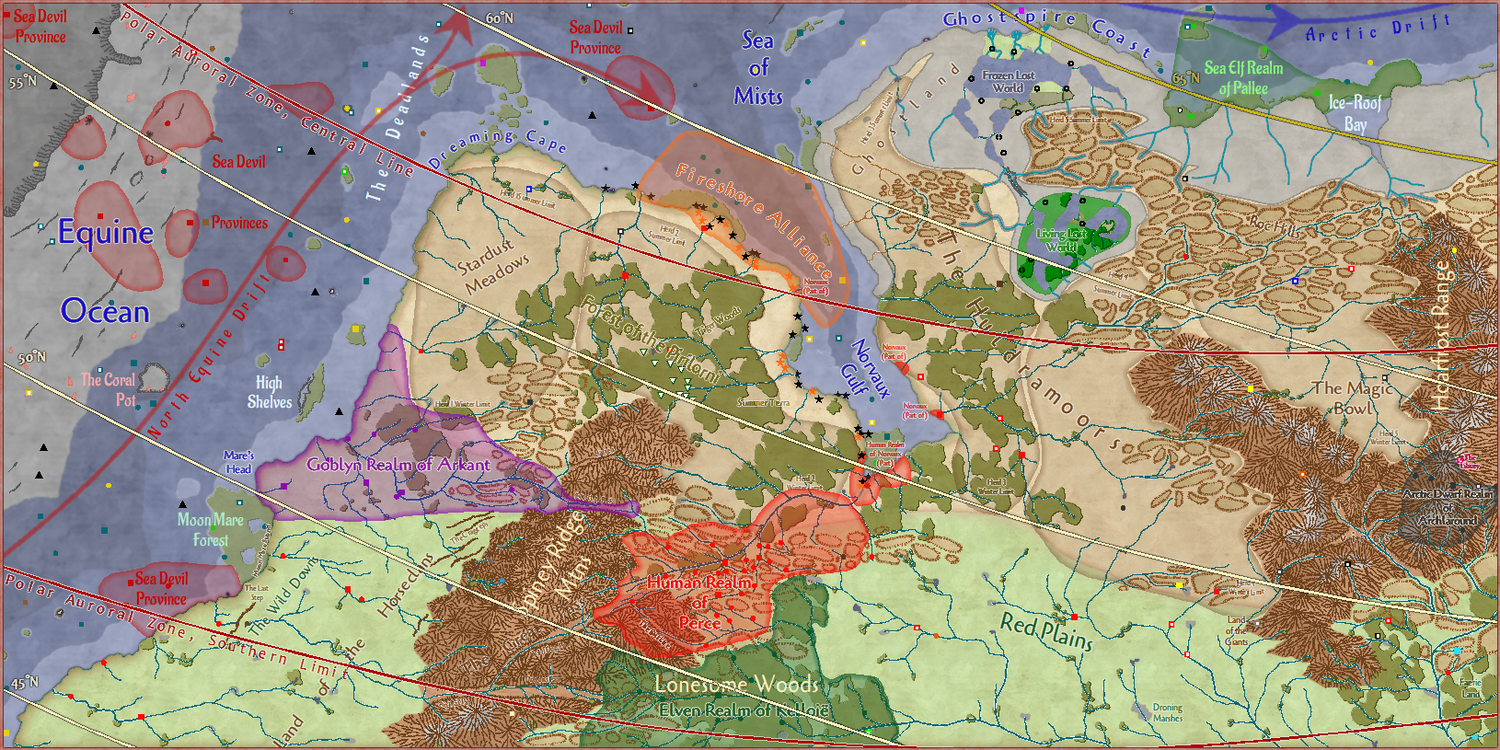 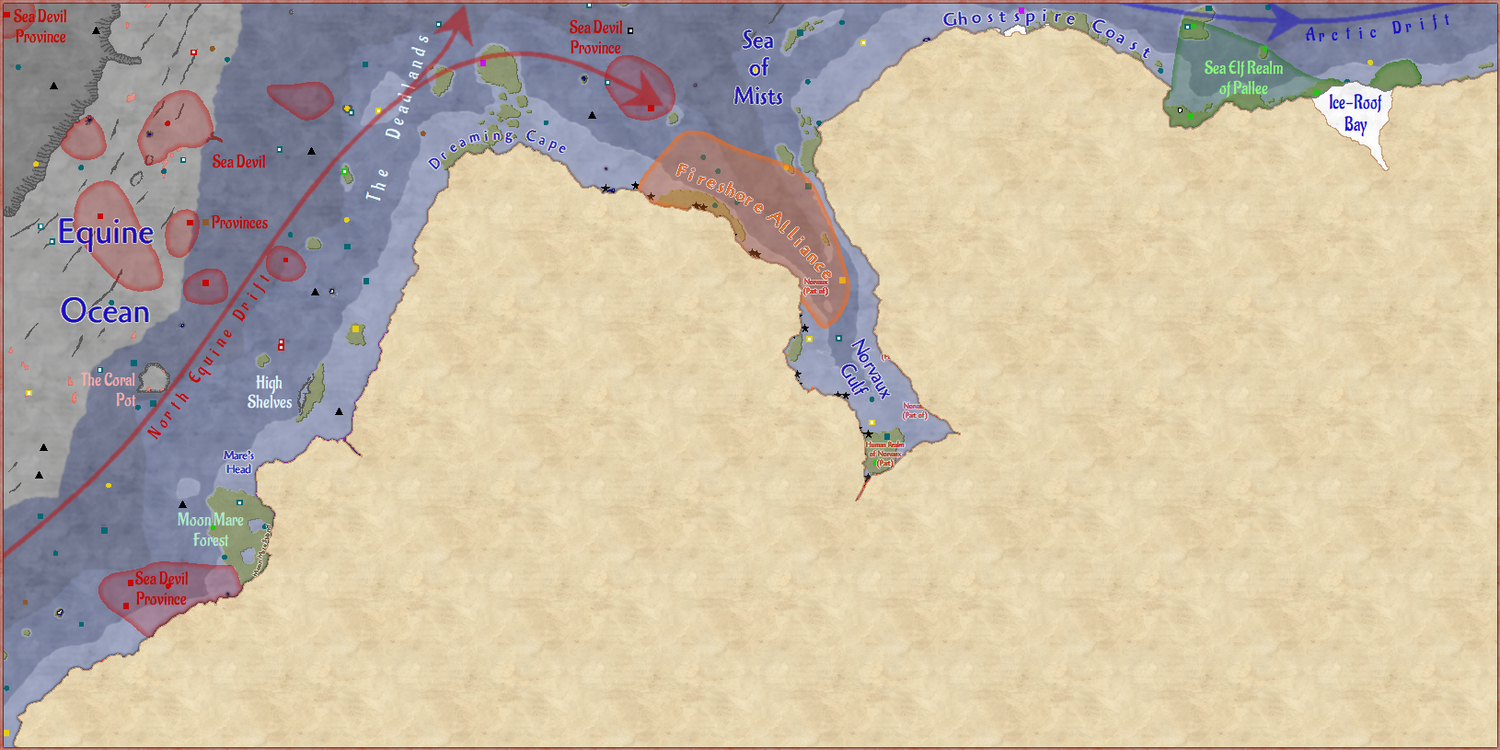 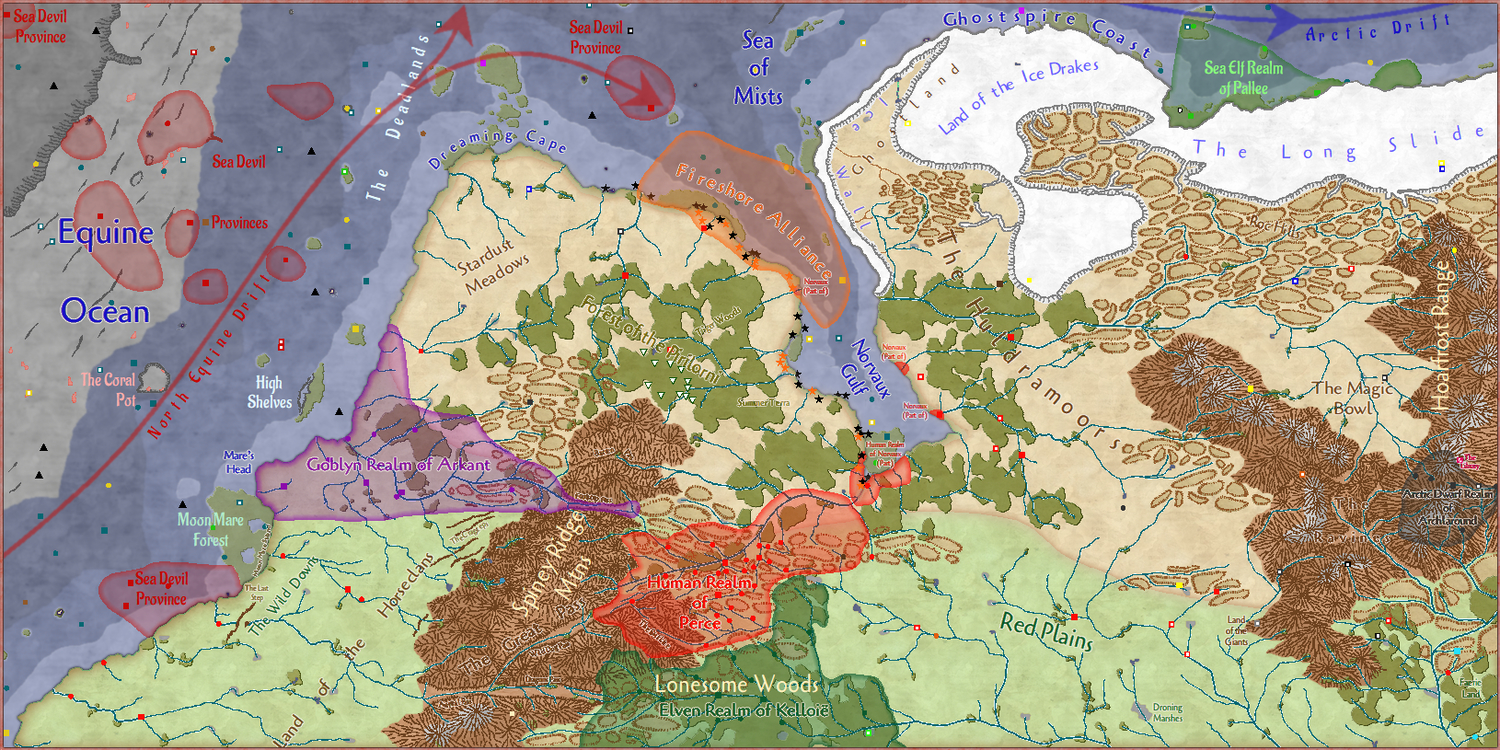 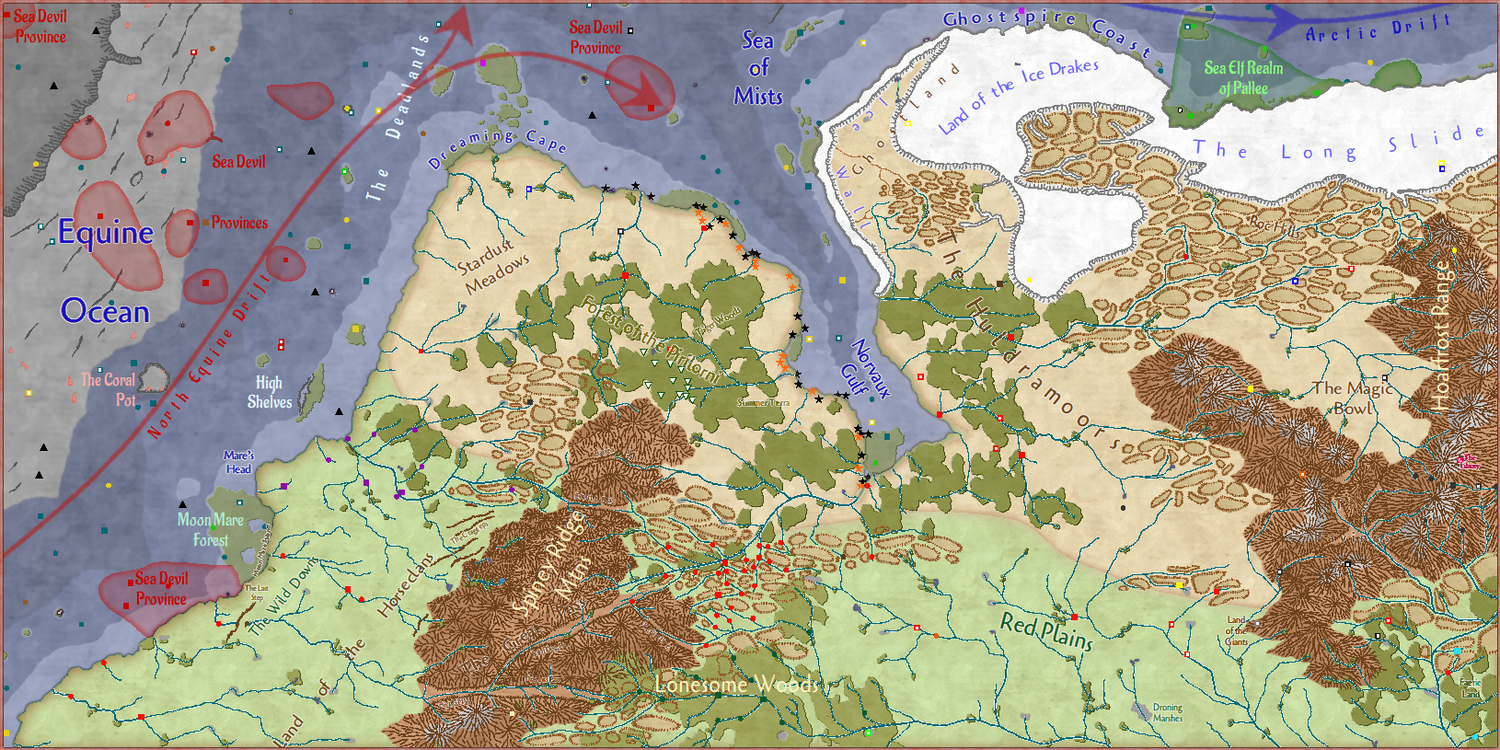 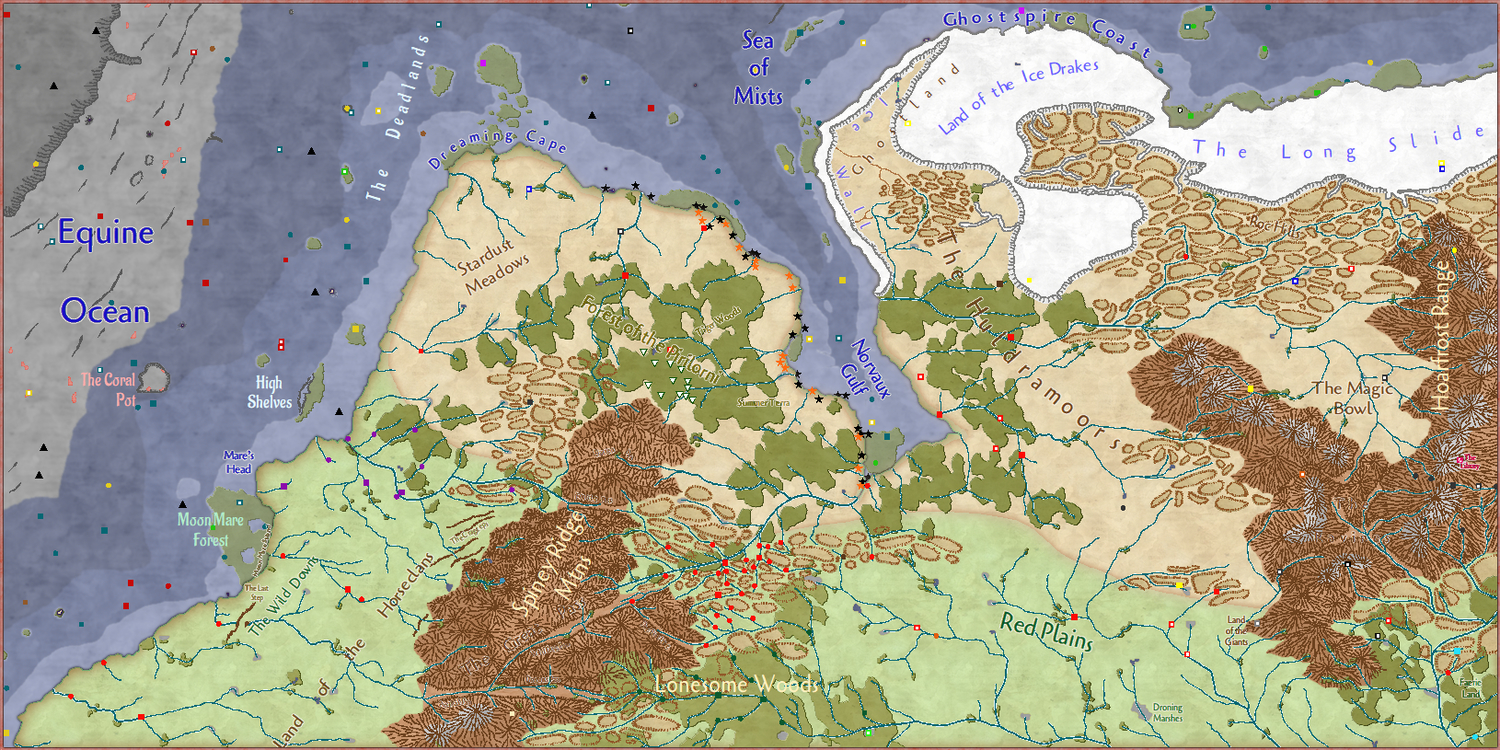 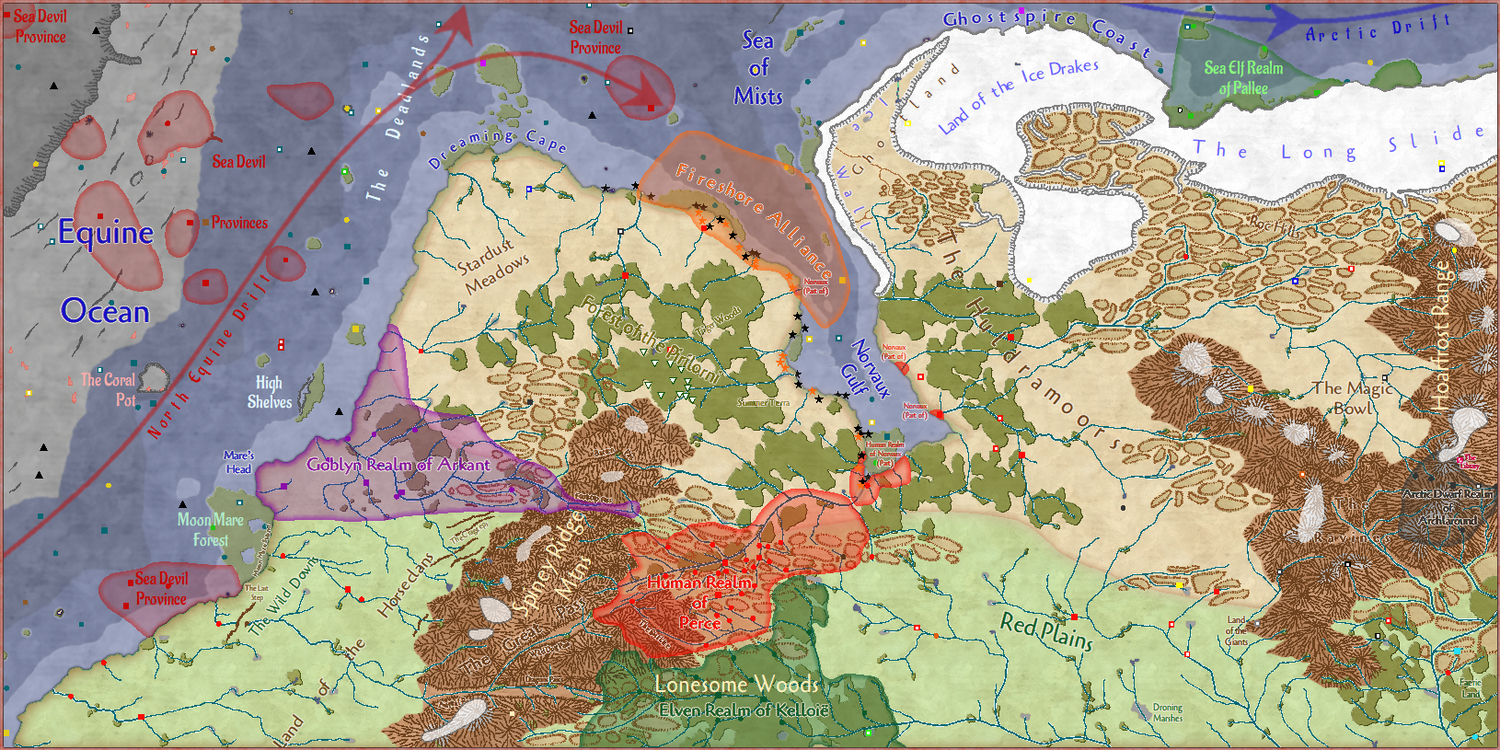