Community Atlas: Towards a Solar System for Nibirum

Wyvern Surveyor
March 2018 in Mapping with ProFantasy's Software
Having been tasked with constructing a Solar System for the Community Atlas world of Nibirum, only a few things were clearly in-place at the outset. Expressed preferences, coupled with the nature of Nibirum as depicted in the surface maps and descriptions of the world itself so far, showed Nibirum to be an Earth-like planet in size and nature, including with seasonal effects and climatic zones, illuminated by a single Sol-type Sun. As noted before, I'd opted for a simplified 360-day year for the planet more or less from the start too. One, probably Luna-type Moon, was preferred at least (Quenten), although perhaps with one or more additional moons (Dogtag). I assumed impressive astronomical phenomena like solar and lunar eclipses would be required additionally, to provide Nibirum with extra flavour and reality. The solar eclipse factor gave a first physical parameter beyond the planet, since Earth-type total solar eclipses could only happen if one of Nibirum's moons had the same apparent size as its Sun.

The "multiple moons" question led me back to an idea I've played with previously in RPG settings, a variable effect or object usually seen in one part of the sky, when visible at all, which can become a convenient plot-device or subject of game-omen lore. I settled on a group of small cometary objects loosely "trapped" around the leading (L4) Lagrange point on Nibirum's orbit. The L4 and L5 Lagrange points on a body's orbit are gravitationally stable points where relatively small objects can become caught for very long periods (centuries to millennia). Their own pre-existing space-motions mean the objects usually continue to orbit about that stable point, so are not necessarily fixed in one spot. Each point lies more or less at 60° from the Sun as seen from the main body - such as a planet - forming one apex of a conveniently equilateral triangle, with the planet and Sun at the other two apices. This means, handily, that the planet's distance from its Sun is the same as the distance to either of these two Lagrange points. One lies 60° ahead of the Sun as seen from, say, Nibirum, the other 60° behind the Sun. Thus objects around Nibirum's leading Lagrange point would be visible close to the ecliptic in the morning sky before sunrise. So these little comets quickly became the Phoenix Asteroids Dawn Heralds.

Leaving the L5, trailing, Lagrange point empty - at least of anything visible from the surface of Nibirum - opens the door to scholarly speculation on the planet by those seeking symmetry. So maybe the misty stars of the Dawn Heralds shine showing the approaching richness (or otherwise) of the magical-mystical potential into which Nibirum will soon be moving (for a 360-day year, 60° = 60 days on Nibirum). That there is no equivalent group of Dusk Heralds could suggest that potential has been exhausted by the passage of the magical world of Nibirum, and will take much time - most of a year, say - to recover.

However, fitting a second, much smaller moon into the trailing Lagrange point on the orbit of Nibirum's main Moon seemed an ideal reworked symmetry, which also gave the planet more than one natural satellite. (The Lagrange point geometry is the same for the lunar orbit. Just substitute "Nibirum" for "Sun", and "main Moon" for "Nibirum" and "the planet" in the earlier description.) Thus was born the Red Moon, always faithfully following the larger White Moon around the sky. Not quite Gloranthan, though with names ultimately inspired by that fantasy world, via the old "White Bear, Red Moon" board wargame name, later revised as "Dragon Pass". Still more perfectly, and following from typical Earthly precedents of similar celestial behaviour, this can also be called the Dog Moon. So naturally, another name for the White Moon had to be the Q Moon (only from Nibirum's southern hemisphere, however, and then only by societies that recognise the significance of the apparent pattern forming said letter on the lunar disc).

Then 'twas time to see what else lay beyond Nibirum. There are of course numerous random solar system generators available for RPG use. Given the experimental nature of the whole Night Sky for Nibirum concept, I decided on one I've had for a while, but never used this way before, Galactic Baroque's "Instant Universe" (available for purchase via DriveThru RPG). This proved interesting, if not quite so straightforward, rapid, or complete as its name might imply.

Needing a Sol-like Sun, and given there is some scholarly debate still as to whether Earth's Sun is spectral type G2 or G4, I went with a class G3 sun of standard stellar type for Nibirum. That means it has sunspots from time to time, and a solar wind able to produce polar and sometimes mid-latitude aurorae, just as we see from Earth. At one solar mass, it seemed sensible to also go with a similar size to our Sun, thus Nibirum's Sun has a diameter of 1,400,000 kilometres (Sol's is 1,392,530 km; if you want miles, divide by 1.6).

Dicing on the Instant Universe tables provided the System with seven planets, their distances from the Sun, masses, sizes, natural satellites and so forth. Some of these features were slightly reworked or rounded-off to give a Solar System a little less mathematically-challenging for GMs to work with, and a few parameters not given by Instant Universe were added. The obvious place to fit Nibirum into this scheme was as the third planet outwards from the Sun, because that had a rounded distance of 130 million km, not far from Earth's own circa 150 million km.

Next came a series of calculations to find out what of all this could be seen from Nibirum. The Sun has an angular size of 0.62° from the planet (Sol is about 0.5° as seen from Earth), so that decided what minimum angular size the Q Moon needed to be to produce total eclipses for Nibirum. A diameter of 2,130 km at 200,000 km from Nibirum did the trick, with an option (just like for Earth) to have the lunar orbit's centre be slightly offset from Nibirum's centre, so the lunar disc can be sometimes a little too small to completely block the Sun, producing not-quite-total annular eclipses occasionally. Random rolls came up with a Dog Moon size of 350 km, so showing a tiny, faint, red disc about 0.1° in diameter as seen from the planet. The human eye can resolve objects as small as roughly 0.07°, so this is quite near that limit. No other planet appears as anything other than a bright to extremely brilliant star to the unaided eye from Nibirum.

I wanted the Dawn Heralds to be quite easily visible sometimes from the planet, despite no individual object within them being brighter than a 3rd magnitude star - and that only very occasionally. So I decided on them appearing as a somewhat nebulous patch, with at most a few brighter (4th or 5th magnitude) star-like points within, which collectively should be roughly 0.5° to 1.5° across as seen from Nibirum. This equates to a physical cross-sectional area of around 1 to 3½ million km or so, an actual size easily achievable by one quite modest comet of the kind visible from Earth. Such an angular size is similar to that of the Earth-visible Pleiades star cluster of 9 or 10 mostly 4th and 5th magnitude stars in the constellation of Taurus the Bull, about 1° east-west by 0.7° north-south. Despite the relative faintness of its stars (only one is 3rd magnitude), this cluster is a surprisingly easy object for the unaided eye in even quite strong twilight. The proximity of the stars to one another seems to make it easier to spot than just their brightnesses alone might indicate, so the Dawn Heralds can have a similar ability to "tickle" the vision of Nibirese morning sky-watchers.

Choosing what to depict on maps from all this, and how to do so, was somewhat more of a challenge. As I don't have Cosmographer installed, mapping came down to a choice between two main Annuals, CA 22 (October 2008) Star Systems or CA 80 (August 2013) HighSpace Star Systems. CA80 has a greater range of planet symbol options, and I needed two ringed planets, but in the end, CA22 just won out, as despite it having no ringed planet symbols, it did have the option for dynamic lighting effects on its planetary discs. Moreover, CA22's Mapping Guide includes a short tutorial on creating your own planet symbols with said dynamic lighting.

Thus with help from the GIMP (with which I freely confess I am a veritable novice), and still more from the Great and Powerful Monsen (who kindly allowed me to extract from his rotating-world graphics, and provided new, FT-generated, north and south polar views of Nibirum for the purpose), I constructed a small group of dynamic-lighting Nibirum planet symbols for use with the Atlas, one set showing six views of just the world, the other half-dozen onto which I GIMP-added some airbrushed white cloudy shapes, to make it look a little more homely.

After further deliberation, I decided on one chart to show the relative sizes and orbital distances of the planets, and a set of maps to show the satellites and features for each planet.

Many of the details provided on these maps (collected with some further notes in a PDF to accompany them in the Atlas) cannot be discerned from Nibirum. However, I decided to preserve everything that had been randomly rolled or otherwise chosen, partly for the sake of completeness, partly because in some fantasy settings, there are ways of travelling to other planets - the classic sailing ships of the stars in some earlier incarnations of D&D, for instance. It seemed thus a useful adjunct to include this information for any who might wish to explore the Nibirum system more fully.

After that, I constructed some extra charts to help RPG GMs especially keep track of what's visible, where and when in Nibirum's night sky, starting with those Moons. 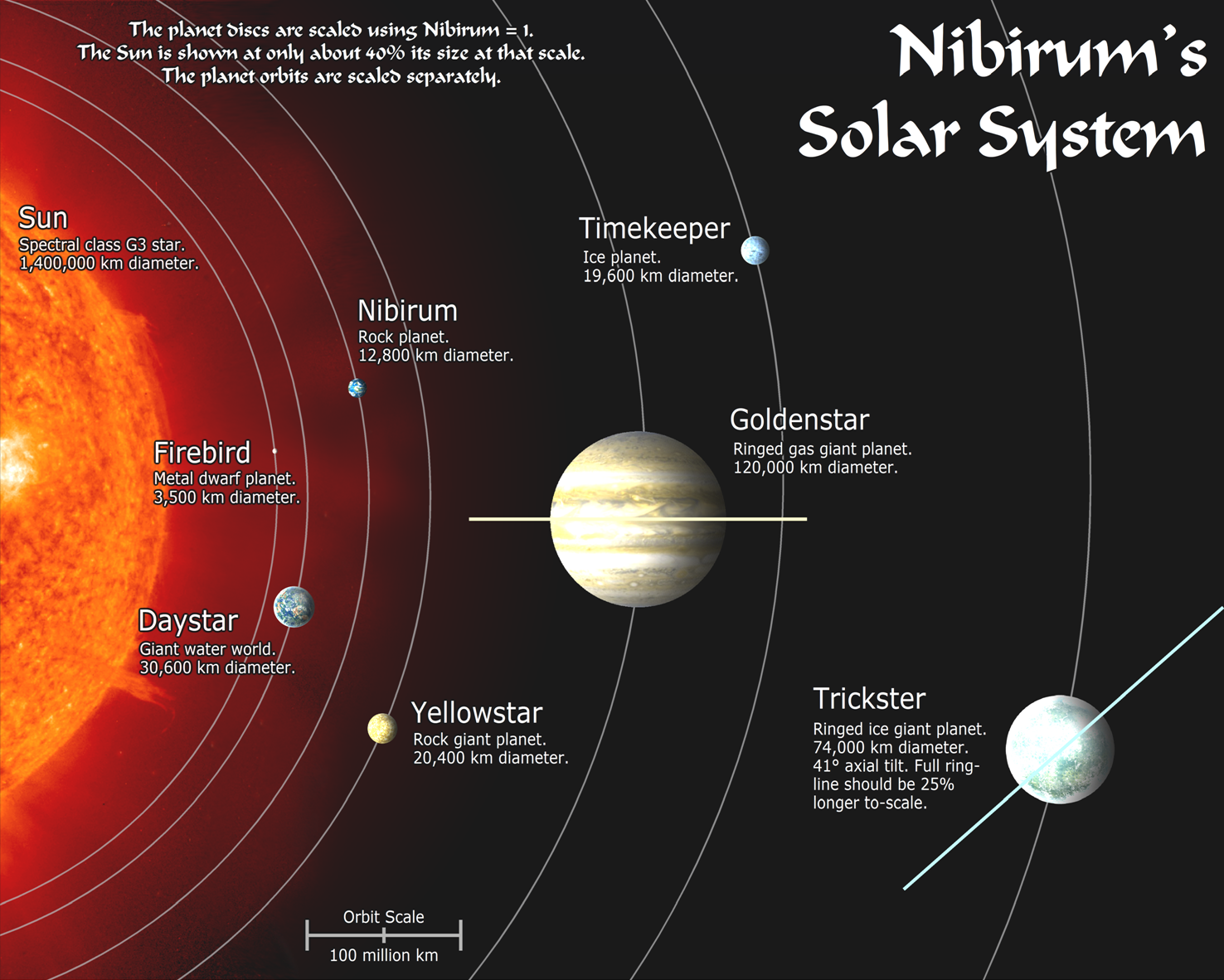 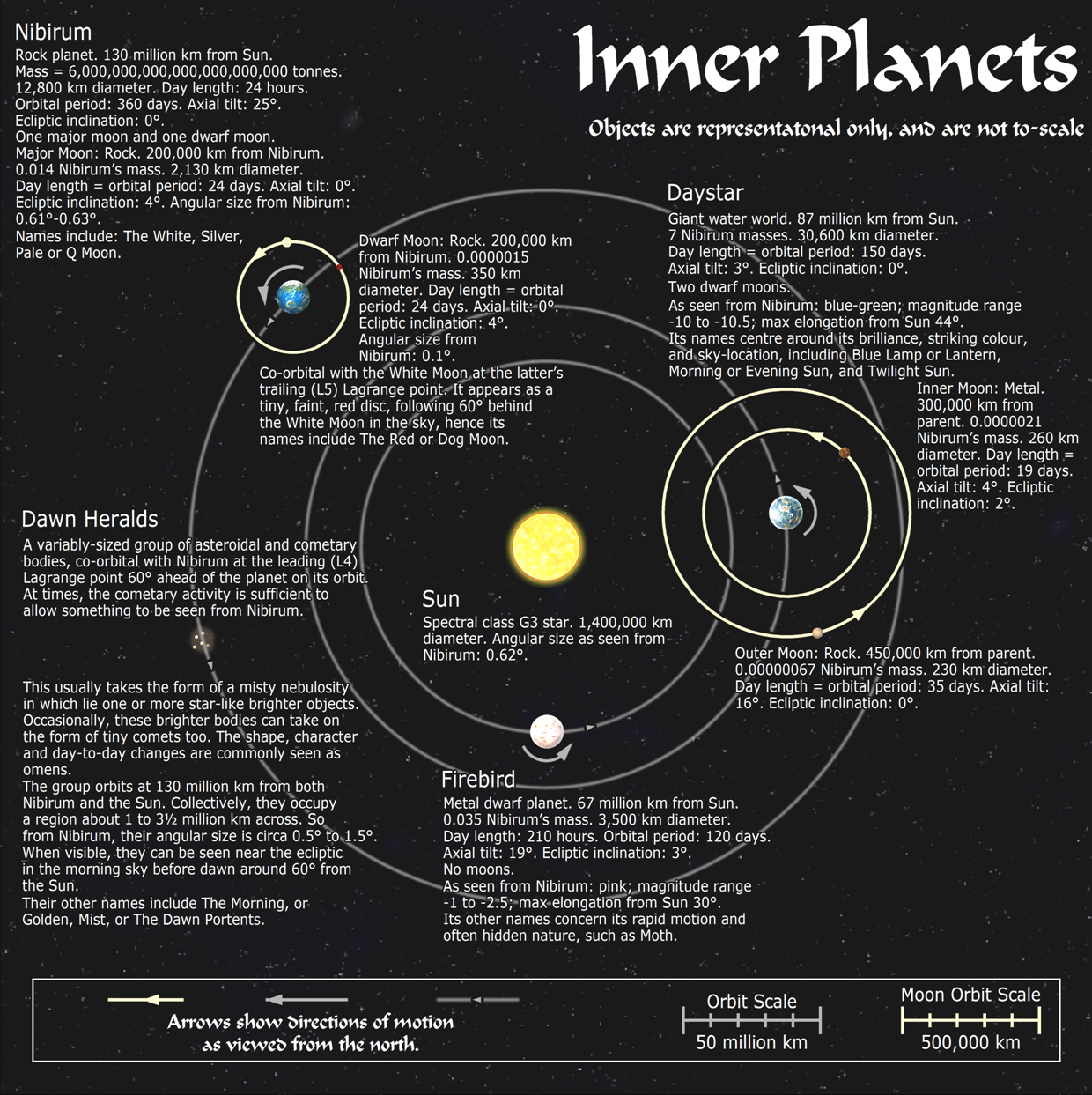 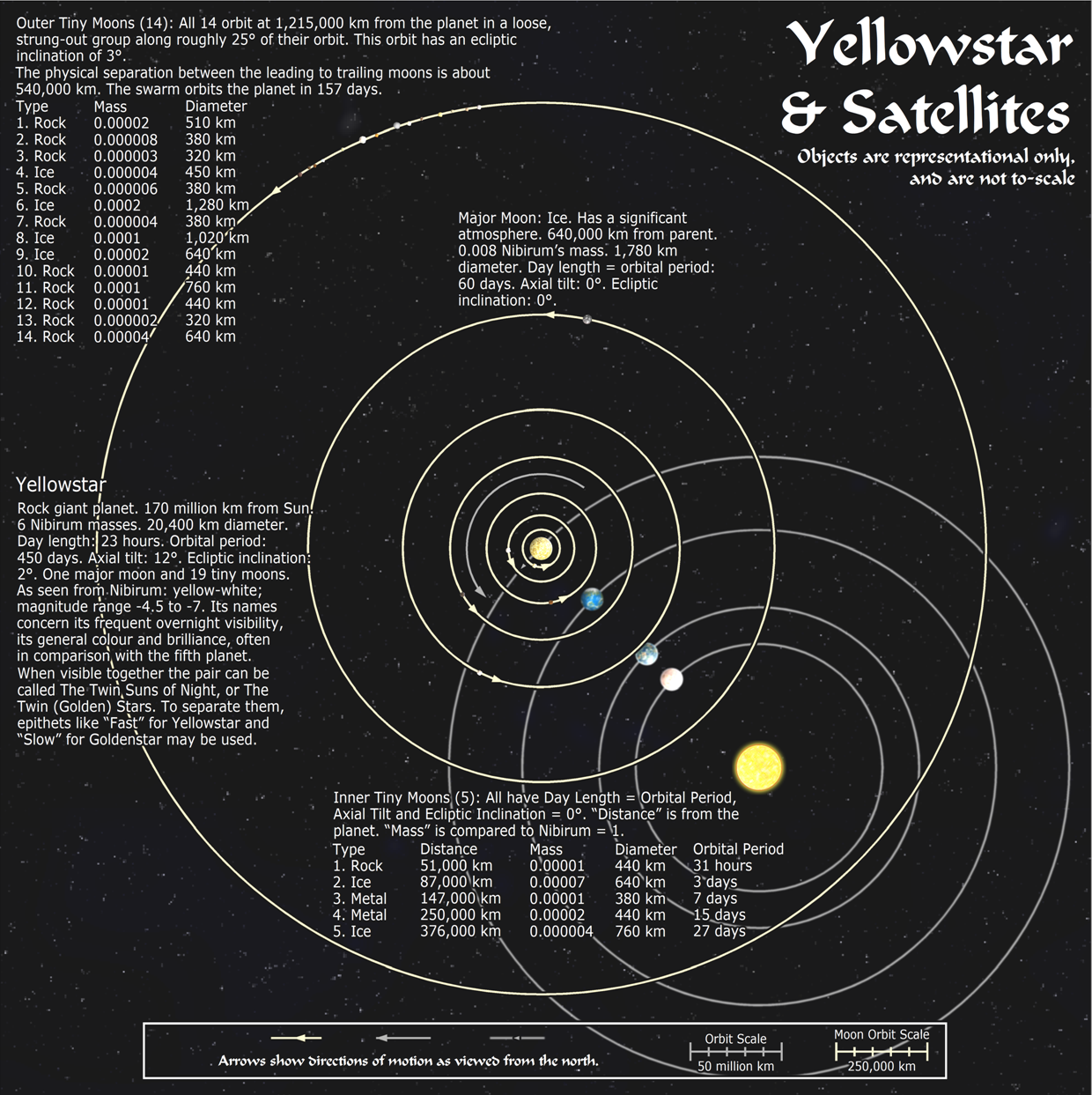 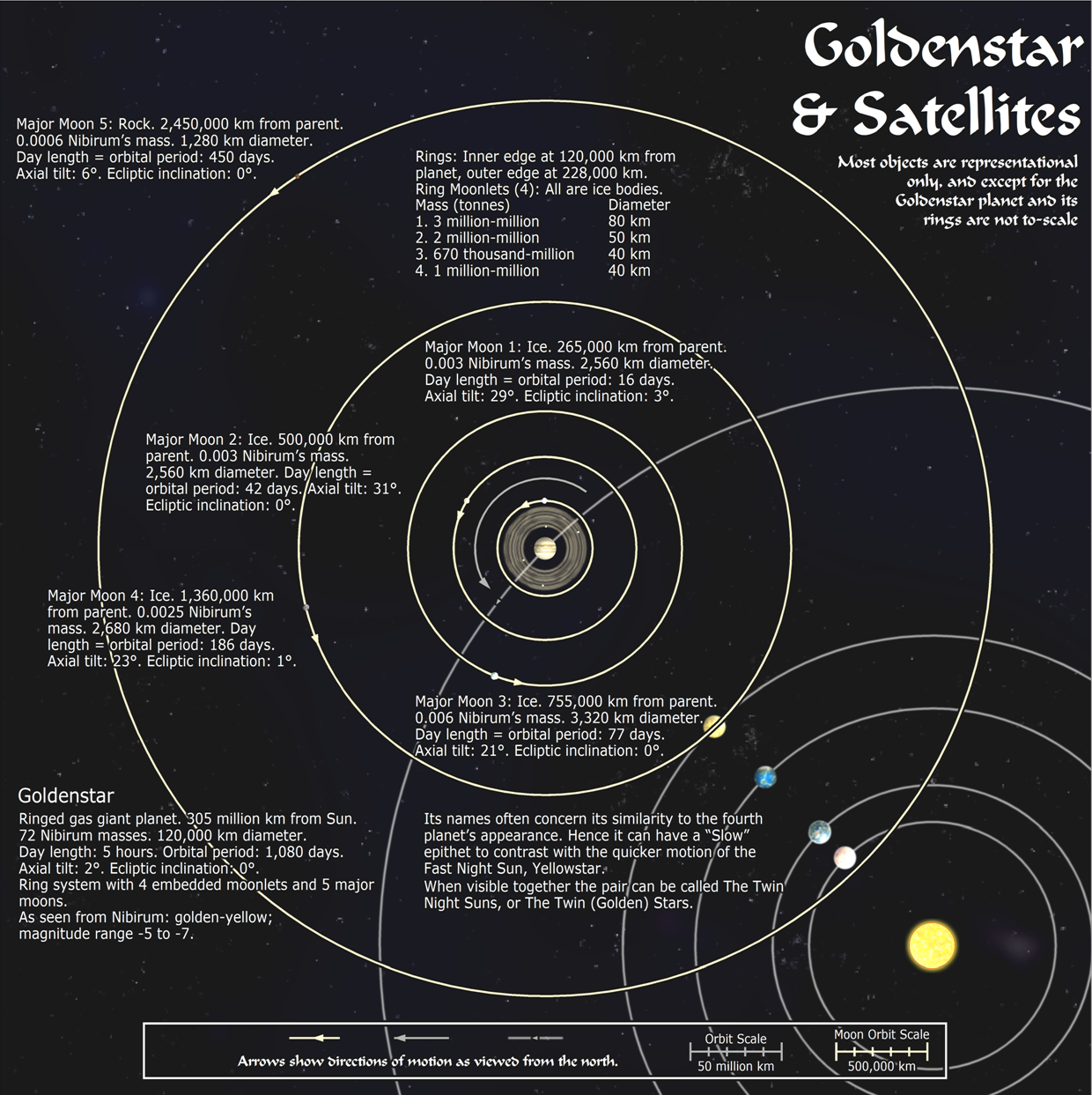 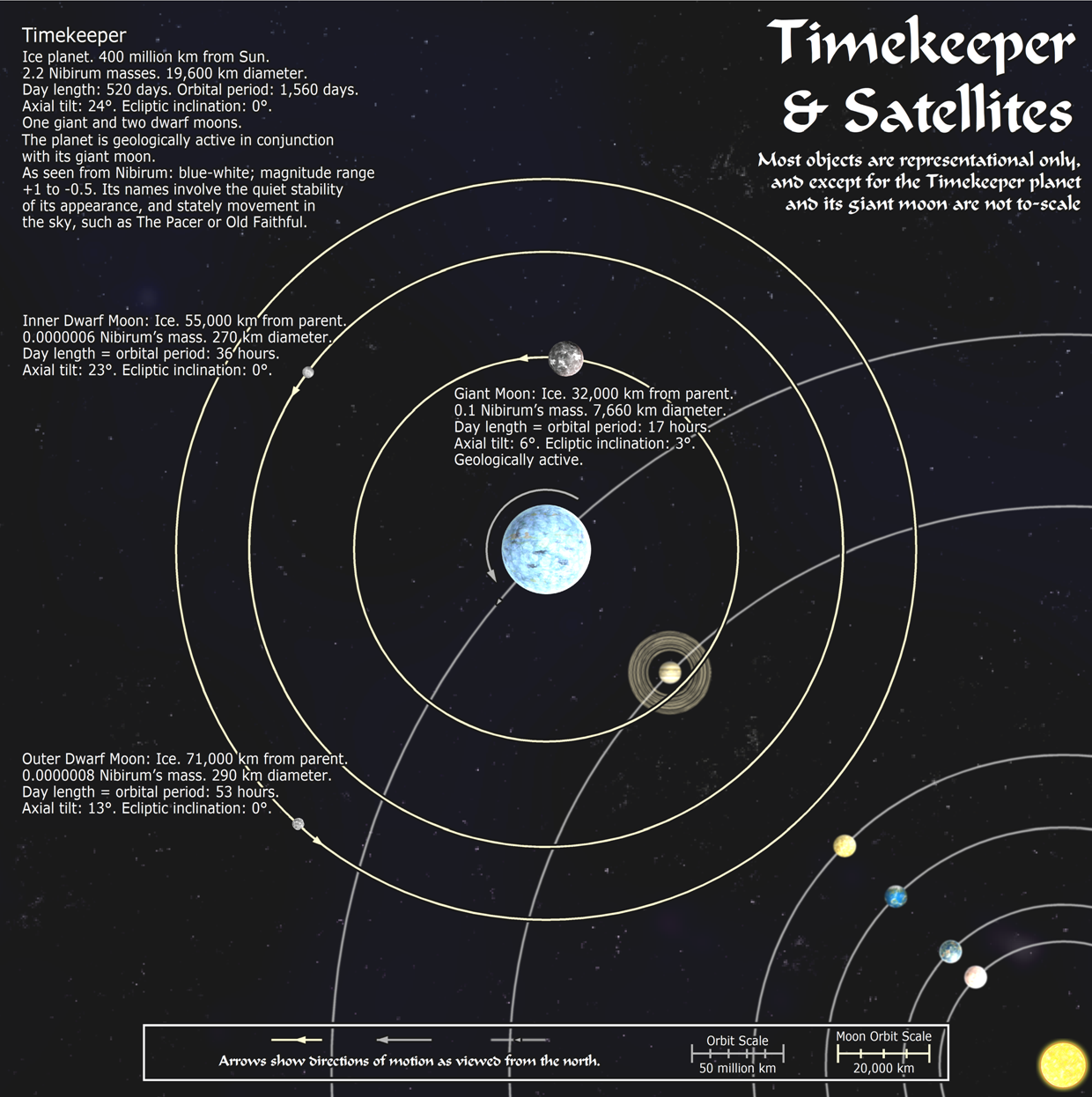 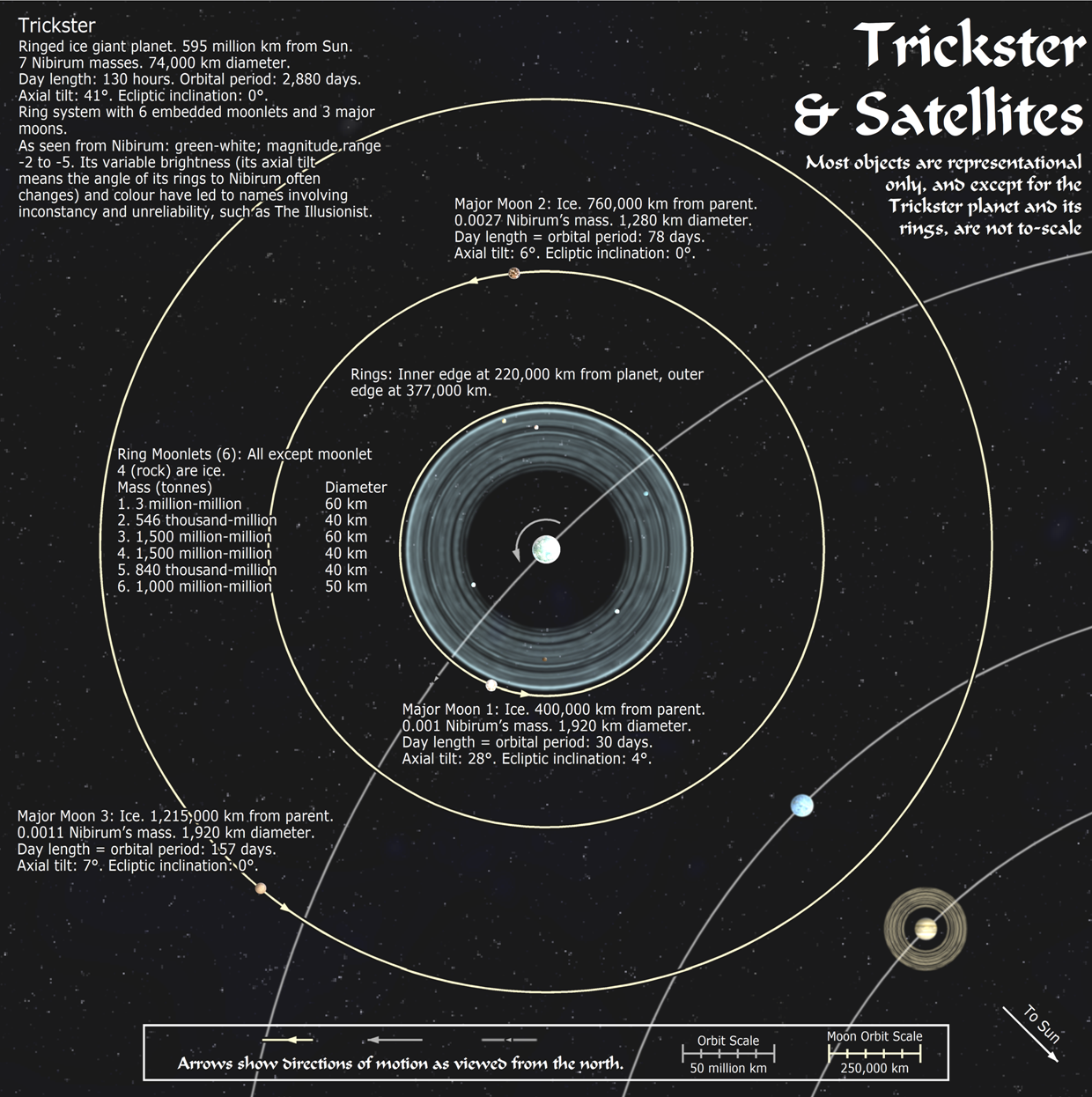 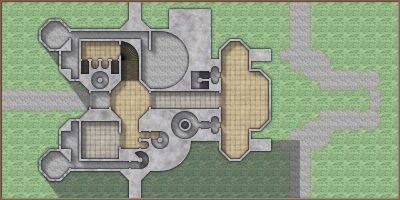