Map of my running campaign

Jensen
August 2017 in Show and Tell
Hello everybody,

I want to show you the map of the current campaign I`m playing (as player, not as Game Master). Creating this map is a bit challenging, as the game we are playing is a RPG from the 80s/90s and contains a lot of freaky fantasy places inspired by the novels of Tanith Lee (like this pyramid whith the eternal light on the left side of the map) which are not easy to get on the map. The other challenging thing was the area called `lands of fire`, a land with vulcanos, lava and everything clouded in fog.
If anybody has ideas how to create such special symbols or knows better ways to create such lava regions please let me know. Thanks :-)
Don`t wonder about the strange mountains (the circle) in the middle or the way some rivers go. I took the landmasses from the original world-map, this world is highly magically, formed by active gods with areas created in wars of mages etc. An old-school fantasy world without the wish to be somehow medieval-like and realistic (thats why we play it :-)). 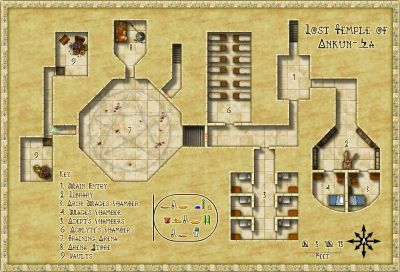