jedius Traveler
August 2015 in Show and Tell
Some of you may have seen this from my other thread, but now that it's all resolved, I thought I'd share my next battle map: Wildbyrne Outpost. 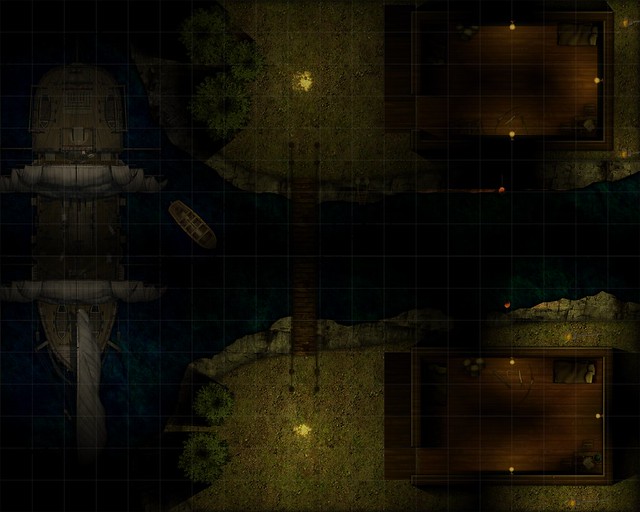 The players are about to embark on a clandestine journey into enemy territory to assassinate the Great Crow of Karkoth; they'll need to sneak in by going up the River Wildbyrne. They'll eventually hit a tributary that will, with the right guide, lead them through the treacherous woods into Karkoth under the cover of night. However, there is an outpost (pictured) at the mouth of the river manned by traitors loyal to the Great Crow.

The players have stolen a Karkothi ship (the big one) and intend to use that as a confusing distraction for the outpost guards while they sneak into the outpost (via the rowboat) and take them out before they can send warning of the unexpected river-rats.

I used Ralf's technique for making the steps up to the outpost towers, but other than that mostly SS2A symbols supplemented with a few other random ones I had lying around my computer (I wish SS2A just had more since I really like the style).