The basic premise for this set of maps is that of a wandering sub-surface palace, which is occupied by/part of a powerful humanoid creature, possibly a deity (nobody's very sure). The palace magically shifts elsewhere every day, and changes its form at the same time. It is composed entirely of ice, and has the shape of a gigantic snowflake. It can only appear in an iceberg, in pack ice, an ice cap, or a glacier, or in a huge snow-cloud high in the air. There is always only a single entrance on the surface, surrounded by delicately intricate ice-sculptures of summer flowers and foliage (yes, even in the cloud); the rest of the palace is buried and completely hidden at all times (again, yes, even in the cloud!). The palace fits within an area at most roughly 600 feet by 500 feet, though its size changes from day to day.

My idea is to prepare a location map showing ten potential places the palace may appear, thus giving a simple random option of where it may be using a 1D10 roll. Another 1D10 roll will give the form and size the palace has that day, so I'm working towards having ten different versions of the palace map. The following map is an early version of the locations map, to give an idea of what I'm meaning: 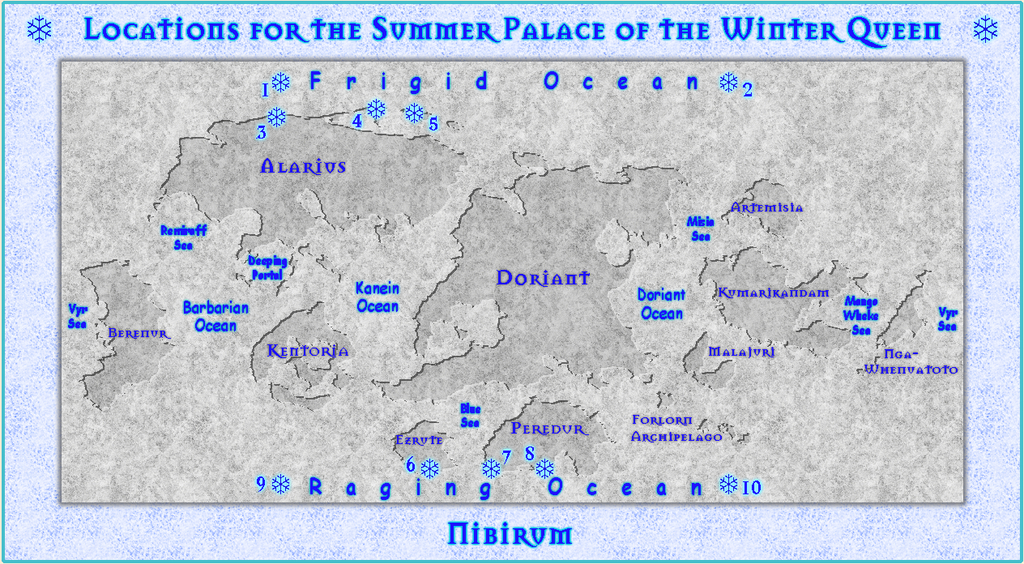 For this, I've basically reworked Shessar's beautiful world map into a very simplified version using one of Monsen's recent blog posts about representing subtly inset features on CC3+ maps. The numbered snowflake symbols (Wingdings font letter "T"s) indicate the potential palace locations. These are not going to be defined more precisely than this, so if the random roll comes up twice the same for two separate days, this just means the palace has moved, but not beyond the general area indicated - so "6" again means it's still somewhere in southern Ezrute, for example. It'll be up to the GM to decide exactly where in the general areas the palace actually is. This is not the final version, which will be a bit larger, and have more information; I've adjusted a couple of the markers since this version was prepared as well.

The 1 & 9 markers are for icebergs/pack ice somewhere on the great northern and southern oceans; the 2 & 10 ones are for the aerial snow-cloud versions, which will be found exclusively somewhere high above those same two oceans.

The palace and its occupier are intended to be things that might be useful to find for very esoteric information, but which are nearly impossible to guarantee locating at all quickly, even by those who know of their existence. I thought this might be an interesting addition for Nibirum more generally.